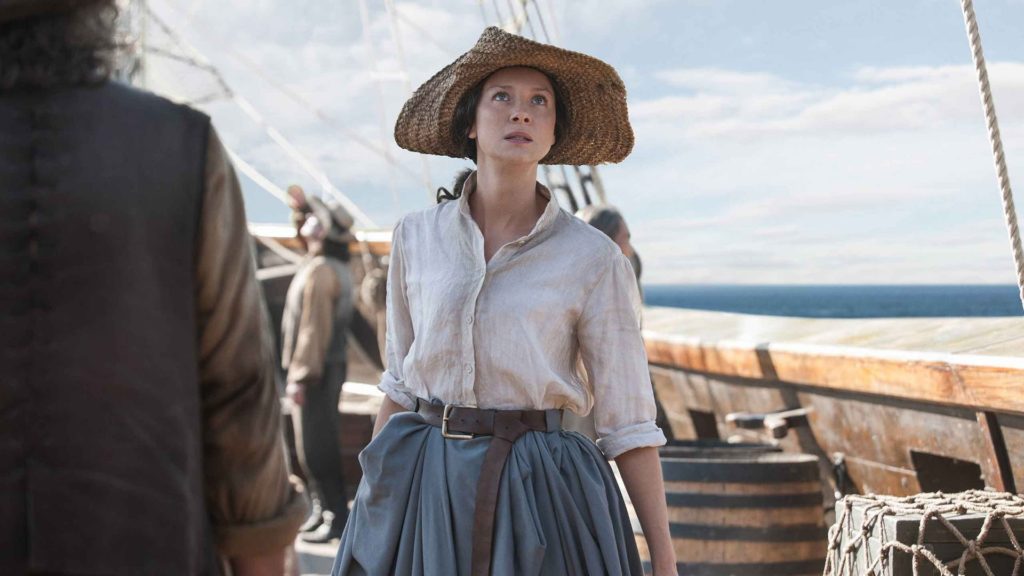 Below are excerpts from new interviews with executive producer Matthew B. Roberts and production designer Jon Gary Steele. Be sure to click on the links to read the full interviews. Since these posts/interviews follow the latest episode, beware of spoilers for the current and future episodes.

Entertainment Weekly: Outlander: How those ship scenes were shot 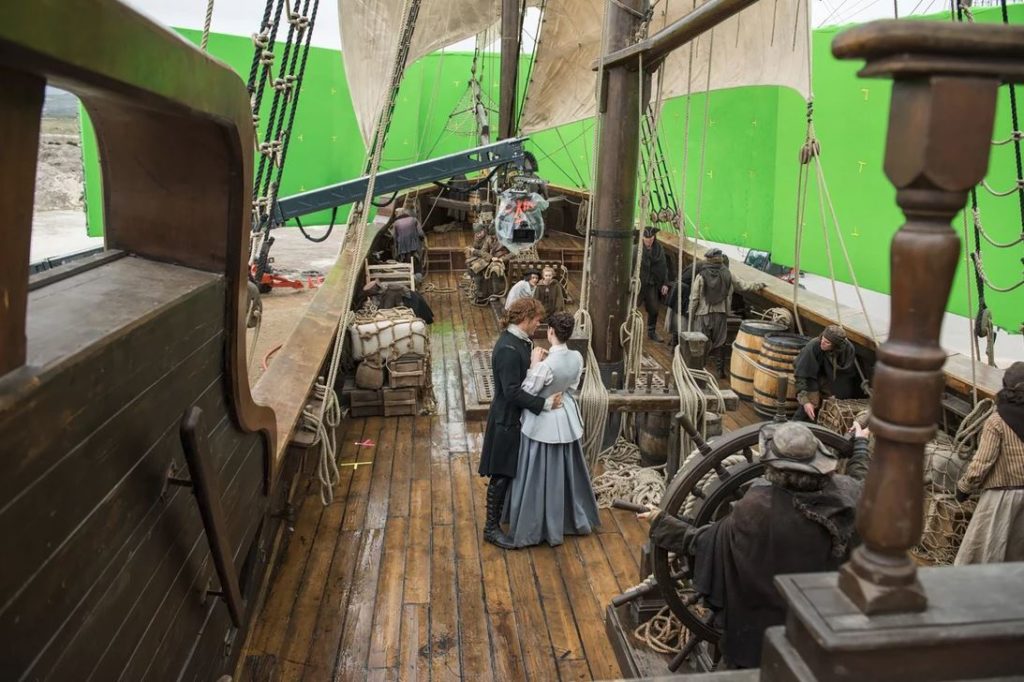 “The page count was funny [in Voyager],” executive producer Matthew B. Roberts tells EW. “I think there was 104 pages, and 6 pages are on land. When I first did the tally, a little aneurysm started in my head. I was like, I don’t know how we’re gonna do it. That’s just so much on the water, and we want to do it great. But it just so happened that on the same network, a drama with ships! Can we use ’em? Is it okay? Do we have to revamp ’em? And it ended up working out perfectly, timing-wise. The transition really didn’t take as long as you might think to move continents, hemispheres, time zones, everything you can think of.”

Entertainment Weekly: Outlander: The story behind that horseshoe, and the latest Easter egg

“We try to keep with the spirit of the story of the book. And we want to keep Jamie’s seasickness because that’s a big part of his character,” says Roberts. “But we also wanted to make sure we played out Mr. Willoughby’s story, so we felt [the horseshoe] helped to drive it and shows the mentality of the sailors, how they are looking for any excuse to explain their change their luck. The story goes from one person being bad luck to finding another good luck charm. It ends up being Mr. Willoughby.”

That wasn’t the only surprise added to “The Doldrums.” The bow of the Artemis featured an Easter egg from season 2 — a wooden statue that first appeared in the French brothel where Jamie met Bonnie Prince Charlie and young Fergus.

The Hollywood Reporter: ‘Outlander’ Sets Sail and Brings Drama on the High Seas

Jamie’s experience while Claire is on the Porpoise isn’t told in the book. Why did you decide to tell that story?

When we start breaking stories, we always start by discussing what point of view and what perspective we’re going to tell it from. As the season has gone along, you see some episodes are more heavy with Jamie stories, and the next episode is a heavier Claire story. This is one of those stories in the next episode, as it’s a little heavier with the Claire story, but we still wanted to go back and tell Jamie’s as well since the book just tells Claire’s story. We wanted to show what Jamie was going through at the same time. We jump back to the Artemis and we created this story of how he gets imprisoned, what he does to try to get himself free so he can find his wife again. When he gets to this point of the story, he’s waited 20 years to have her back and he doesn’t want to lose her right off the bat. She gets taken by someone on what he thought was a deal where she was just supposed to go over, check patients and come back. But actually Captain Raines made a deal with Captain Leonard of the Porpoise and he knew all about the deal, and Jamie wasn’t a party to it. They didn’t even ask Jamie, and that’s why he was so upset about it.

From a creative standpoint, what was the most challenging thing about taking Outlander to sea?

Being stuck on ships for two episodes, visually it’s tough. You’re below decks, it’s dark, it’s dank, there’s vomit — our fake vomit actually smelled worse than real vomit, I don’t know what they put in there but it was really horrid. We were in one location for a very long time, so we had to keep it fresh and keep the story moving. We couldn’t let it get stale in these environments that were very stale. David Moore directed both of these episodes and did a great job keeping the camera moving and getting them up on decks with fresh air and down in the holds in the darkness. It’s like 12 Angry Men where you’re in a jury room for the entire movie but you’re moving around and changing the angles to keep it exciting. That helps out and keeps it fresh, especially when there’s so much death going on in the next episode.