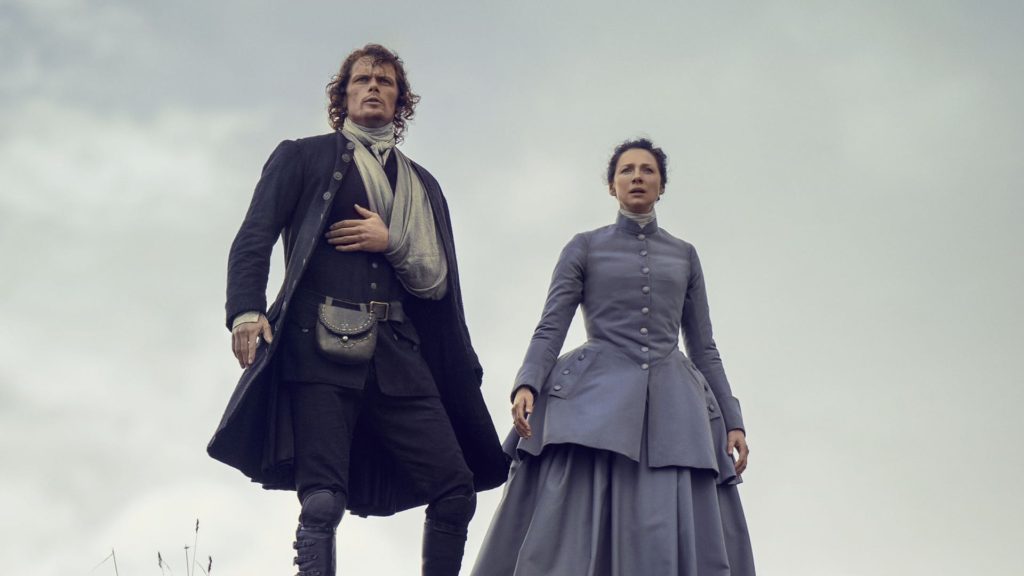 Below are excerpts from new interviews with Sam Heughan, John Bell, Nell Hudson, executive producers Toni Graphia and Matthew B. Roberts. Be sure to click on the links to read the full interviews. Since these posts/interviews follow the latest episode, beware of spoilers for the current and future episodes.

“He did get off pretty lightly, to be honest,” cracks Jamie’s alter-ego, Sam Heughan to EW.

It turns out executive producer Matthew B. Roberts and the writers “went round and round about” the thrashing when writing the script more than a year ago, but decided against it because they had already planned to include a whipping scene earlier in the season.

“At the time, there was going to be a flogging in episode 3 and a little goes a long way,” explains Roberts. “We were going to have a flogging where John Grey brings Murtagh out [of his cell] for having tartan. He brings him out because he wants Jamie to reveal everything about his conversation with Duncan Kerr and he feels like Jamie is holding back. They string him up to be flogged and Jamie calls his bluff. John Grey, being an honorable man, doesn’t have him flogged. In turn, he gives him medicine and treats him with compassion and that opens up Jamie to reveal more why he escaped. We ended up pulling it out of episode 3 but we didn’t know we would do that at the time when we wrote episode 8. Sometimes, that happens.”

Entertainment Weekly: Outlander: How that final scene with Claire and Jamie was filmed

It was both an awesome — and sad — sight at the end of Sunday’s episode of Outlander: Claire and Jamie standing on beach, watching how smugglers have stolen off with their sweet Young Ian.

And all it took was a simple flying camera!

“We did that with a drone and hovered it in front of them,” executive producer Matthew B. Roberts tells EW. “And then we pulled it back as fast it could as it went out to sea.”

The Hollywood Reporter: ‘Outlander’ Producer Defends Latest Book Changes: “It Will Cause a Lot of Talk”

“We don’t even like to say ‘cuts’ because we love the books. We hate to leave out anything,” executive producer Toni Graphia tells The Hollywood Reporter. “But we do have to simplify quite a lot just for TV and we only have an hour to tell the story.”

The Outlander team read the books together as a group, and while reading Voyager in preparation for season three, they very quickly realized that fitting the third book into just one season would be a massive challenge.

“It’s so jam-packed. Sometimes we reluctantly leave stuff behind and we did a lot of that in the second half of this season, not just in this episode,” Graphia says. “There is just so much. A lot of people wondered if we were splitting Voyager into two seasons because there is so much but we would rather have a jam-packed, exciting one season than two seasons where we tried to play everything and it wouldn’t be as dramatic as it was in the book. This is one of the most dense books in the series so we picked our favorite parts and tried to do them justice.”

One of the things that’s most enjoyable about the episodes that you’ve been in is Ian and Fergus’ relationship, but we didn’t really get to see that develop since we were following Jamie this season. Can you talk about how close Ian and Fergus really are and why?
Bell: They are obviously very close friends. They do business together. They live in Edinburgh together. They are always hanging out down in the pub. Ian’s view of Fergus is that he’s this kind of like ladies’ man. He’s charming. He’s quite good looking. It’s like, “Okay, I want to hear what your advice is to me,” so I think Ian always has an ear out for Fergus. I think Fergus likes to give advice and help out his fellow family. We are, after all, family at the same time.

Ian grew up with Jamie mostly out of the picture, but we can see he obviously worships his uncle. What is it about Jamie that makes him want to follow Jamie around “like a pup”?
Bell: Apart from Jamie being the King of Men, I think Ian absolutely loves his uncle. There’s love there because they’re family. It’s the fact that he sees his uncle going about, working hard for himself, making a legit business but still has that sense of adventure where he’s smuggling his wine. I think Jamie lets him off with a lot. He’s not his dad. He’s his uncle, the fun uncle. He lets young Ian hang out in a brothel. He lets him bargain for brandy. Ian must feel like such an adult because Jamie puts all of this pressure on him but young Ian takes it and makes it work. Ian is absolutely in love with [Jamie] because he respects Ian, not in the way his parents respect him.

“In my head, I was like, ‘Oh my god, she wins!’” Hudson tells TVLine, laughing heartily. “And then I read the third book and saw the truth of the story, which is that Laoghaire is not a happy woman.”

As Jamie related to Claire during the episode, some vague badness went down in Laoghaire’s domestic life in the 20 years since last we saw her. “Even now, it’s incredibly tough being a single mother and raising child. In the 17th century, it was even harder,” Hudson says. “That’s one of the things I used to be on her side.”

Yahoo! Entertainment: ‘Outlander’ postmortem: Nell Hudson on being the other Mrs. Fraser

We never really get to hear Laoghaire vocalize her own feelings about her marriage to Jamie — we only get a picture of it through what he tells Claire. Do you think she’d tell a different version? Is she pretending that it’s working when it’s really not?
For the sake of the children, she holds it together. But she’s not stupid; she’s many things, but I don’t think she’s dumb. I think she knows it’s not working, and that’s probably quite painful for her. She’s so close to having what she always wanted, but it’s not how she thought it would be. It’s really a bastardized version of her dream life, but it’s close enough that she’s settling for the next best thing. She knows that he doesn’t really love her, but she’s holding it together.

The scene where Laoghaire shoots Jamie is staged in a way that makes it appear accidental. In the book, she deliberately fires at him. Was that change scripted, or was it a decision made on set?
It wasn’t written in the script that it would be a mistake. That was on the day in staging it with the director [Jennifer Getzinger]. I’m trying to remember whose idea it was. It may have happened accidentally in one of the takes; the prop gun went off and I literally jumped. The director liked it, because Laoghaire hasn’t fired a gun before. I think she went to Lallybroch with the intention of doing it, but when it actually happens, it takes her by surprise. It was fun playing the idea of, “Did she mean to shoot him? Or maybe she meant to shoot Claire?” But I’m glad it reads as shock that it happened, because it makes her look a little less evil, don’t you think? [Laughs]