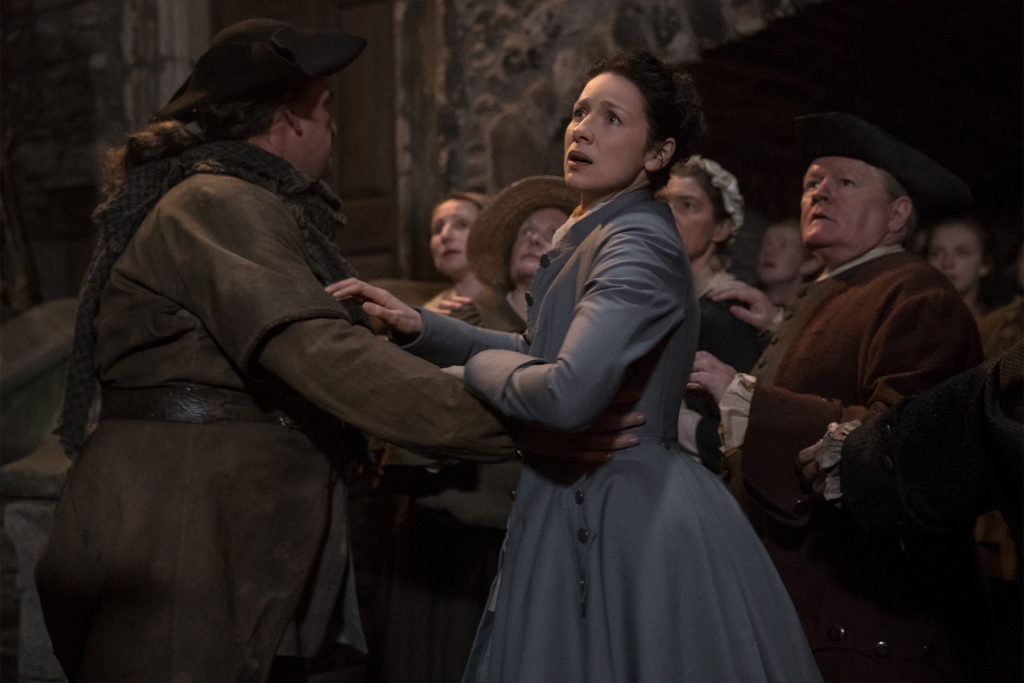 Below are excerpts from new interviews with Sam Heughan and executive producer Matthew B. Roberts. Be sure to click on the links to read the full interviews. Since these posts/interviews follow the latest episode, beware of spoilers for the current and future episodes.

Rest assured, fans: the A. Malcolm sign was saved.

But the rest of the print shop was “almost burned to the ground” while filming the pivotal moment in Sunday’s episode of Outlander. To prepare for the red-hot sequence where Jamie (Sam Heughan) saves his nephew Ian (John Bell) from the blaze, executive producer Matthew B. Roberts tells EW they set fire to a separate print shop erected in the parking lot of their Cumbernauld soundstages in Scotland. (There was also a big house close to Edinburgh off of the Royal Mile that served as the print shop’s practical location, though they could hardly take matches to that).

“We progressively burned it until it was a raging inferno,” explains Roberts of the parking lot structure. “We did it over two nights. We would get it to a certain stage and then art department would fix it up a bit so we can burn it again the next night. We took it progressively through the stages of the burn until it became roaring, fully engulfed.”

The Hollywood Reporter: Why ‘Outlander’ Made That Huge Departure From the Books

Those breadcrumbs include the moment in “A. Malcolm” “when Fergus pulls Jamie aside and he immediately sends him to contact Ned Gowan which is another switch from the book,” according to Roberts.

“That’s us saying in a visual way that Jamie knows that he’s holding something but before he tells Claire about it, he wants to get all the information so he can unload with all the information and legal ramifications of the secret,” he continues. “Jamie wants to tell her but he holds back. It is only 24 hours [in the print shop] so we felt very comfortable with when you find someone again after 20 years, all your prayers have been answered, the first thing you’re not going to tell this massive secret that might send that person right out the door again and back to the stones. We felt it necessary to protect the character that way, and show that he knows and he’s trying to do something about it.”

Instead of having viewers find out when Jamie’s second wife shows up out of the blue to confront Claire, the team wanted to let everyone in on the secret as soon as possible so it’s not as much of a shock. In fact, the writers even considered having Jamie confess to Claire in the print shop episode but ultimately decided against it since it would have been too much of a change.

“That’s exactly what we debated round and round about why wouldn’t he tell her, why would he hold it back, so we gave visual cues of his worry about it and looking guilty,” Roberts says. “We did talk about revealing that right off the bat but the trickle down of doing that would have caused havoc with the storyline so we decided to not do that.”