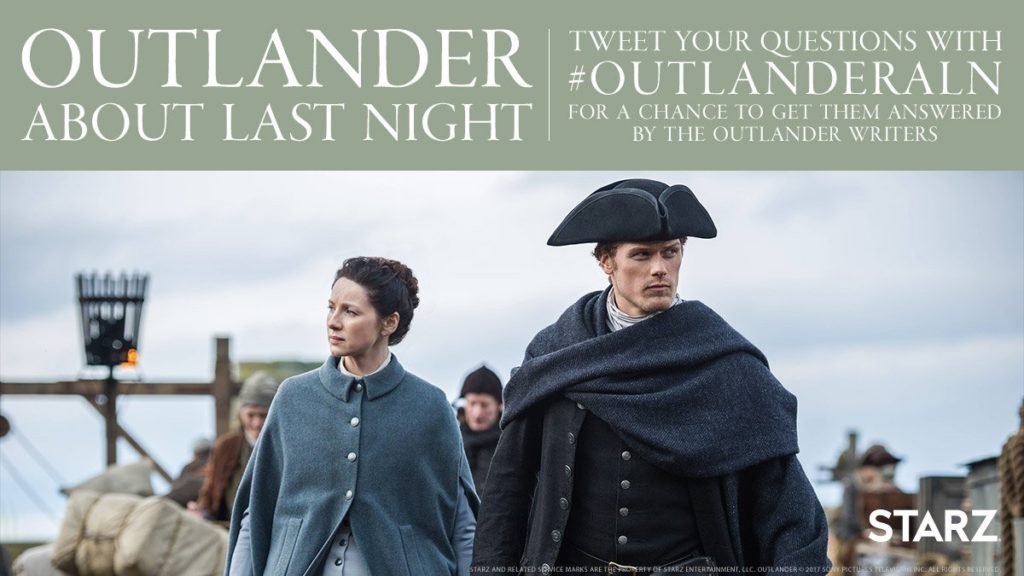 The Outlander writers answered questions about episode 309 on Tuesday.  Toni Graphia and Shannon Goss (who wrote the episode) answered the questions this week.  Below are the answers provided to fans this time around.

Just as an aside to this Q & A, Lynette Rice, a writer at Entertainment Weekly, tweeted about it after she did not like how one of the questions was asked of the writers.  She questioned why this person had a copy of the script “(stolen?).”  l don’t always agree with how people ask the writers or anyone involved with the show about certain things.  I also don’t like when someone doesn’t know that scripts are provided to fans from Starz and are certainly not stolen.  Maril Davis followed up Lynette’s tweet with comments on the situation. Lynette has since deleted the tweet.

Just to clear up any confusion, we willingly post the scripts on https://t.co/DLVPIl9Dv3 as a way for fans to get further insight into the process/see how the sausage is made. We appreciate all feedback. https://t.co/WhSAc6rCrh

Now back to the nitty gritty…

@OutlanderWriter – is there a reason Jamie and Claire are going by 'Fraser' and not 'Malcolm' on the voyage? I thought Fraser wasn't safe for them right now… #OutlanderALN #TheDoldrums #PrayForRain

Jamie Fraser has been pardoned for his crimes. The people who are after him know him as Alexander Malcolm, the name he went by in Edinburgh. https://t.co/Rw9hvVXzgU

#OutlanderALN why are there only 10 episodes this season ? It feels rushed and seems disconnected from the characters and energy the book delivers. Is there a reason for a shorter season

And yet again @OutlanderWriter the editor screwed the pooch! Whats up wit that? Do ya'll realize u would NEVER hear 1 complaint if this dialogue had actually bn in the Epi? #OutlanderALN #TheDoldrums COME ON PEOPLE! Throw us a BONE! MORE Jamie & Claire scenes please! pic.twitter.com/ZNJxM1b8KZ

Aw, don't blame our fabulous editors. Our Executive Producers work very closely and ultimately have to make the tough calls on what to trim from any given episode. #OutlanderALN https://t.co/cbZbnp1Dlr

Is the young brit on the ship helping Claire Jamies son? #OutlanderALN @Outlander_STARZ

No, but wouldn't that be something! (Jamie's son actually would be a wee bit younger.) #OutlanderALN https://t.co/z3jopjoKbx

Was it deliberate or coincidence that Yi Tien Cho was seen painting from a water bucket just after we saw Jamie's sick bucket? #OutlanderALN

No relation. David Moore is a wonderful director from the U.K. #OutlanderALN https://t.co/S3vZZfVK1B

#OutlanderALN @OutlanderWriter Was anything written in the script and/or filmed w/ Claire meeting with anyone else in France?

No, we knew early on that the episode wouldn't be able to handle a trip to France as well. #OutlanderALN https://t.co/yNLfIsGO7X

#OutlanderALN #Doldrums excellent episode! J&C felt familiar again. My question is, what was Mr. Willoby writing on the floor? Was it real? Can you translate? Thanks again for the excellent episode.

It's Classical Chinese poetry, the translation is "Fire rises, in my heart ash remains." #OutlanderALN https://t.co/JxxoK8yWCj

#OutlanderALN Do the actors get the script for one episode at a time or do they get one scene at a time? How much time do they have to study and learn their lines before the actual shooting?

The actors get the whole episode to read before filming starts. Then the individual scenes are xeroxed and passed around on the day of shooting for reference. They are called "sides." #OutlanderALN https://t.co/apFsK3oRWZ

Let me just say what a awesome episode this was! Who were all the me men that came aboard with Jamie and Claire? I think I know but have heard different names. #OutlanderALN

@OutlanderWriter In the books Marsali is 15. Did you age her up for the show? #OutlanderALN

Yes, we chose to make her a bit older. #OutlanderALN https://t.co/Cd5lDYThxa

Thank you for this great episode! ❤ #TheDoldrums
Curiosity: what happen with Brianna's photos? In Voyager Jamie keeps the photos with him, all the time, he want to know things about his daugther, etc… Will we get some of this in the show? #OutlanderALN

The photos are still with Jamie. Stay tuned… #OutlanderALN https://t.co/EC6ttZpLnK

The ships were never out on open water. They were specifically in a parking lot. #MovieMagic #OutlanderALN https://t.co/rinnlOGK07

@OutlanderWriter Sometimes the script describes an emotion or how a line should be spoken. When it doesn't, is the interpretation up to actor or director? #OutlanderALN

It's a collaboration between the actor, director and the writer/producer who is always on set. Some scenes/lines need little or no discussion. Some need more discussion than others. #OutlanderALN https://t.co/gvDQ5MDzKq

#OutlanderALN – could Claire have been pressed into service, as a British subject, even though a woman? Seems this is what is intimated when Leonard sends word back to the Artemis.

Technically women could not be pressed into service, but the Captain of a powerful military vessel was desperate for a surgeon and Raines was not going to deny him. #OutlanderALN https://t.co/z8Ztc2HRRs

Why was Mr. Willoughby’s pelican left out of the series? Too difficult to replicate? #OutlanderALN

We kept Ping An in until the 11th hour, we even looked for a trained pelican, but ultimately, yes, it would've been too much to do from a visual effects standpoint when we had so much VFX already in the show (every shot that is above deck was a VFX shot). #OutlanderALN https://t.co/W1RpZHxaJj

I love that Claire is more dynamic than ever. One minute, she’s mourning her daughter with Goodnight Moon. The next, jumping into action to save an entire crew. What’s it like to write for such a complex and humanized character? #OutlanderALN

In a word: wonderful. And having @caitrionambalfe bring her to life is icing on a rad cake. #OutlanderALN https://t.co/rmAU71s02B

Mars-lee. Rhymes with parsely. (But most of us spent about half a year mispronouncing it.) #OutlanderALN https://t.co/Ac2sLXa7mB

They knew Jamie wouldn't be pleased… to say the least. #OutlanderALN https://t.co/dnVLPdURpz

#OutlanderALN This was one of best Eps in a great season. We had the intimate J&C moments that we love about the books. Is Shannon Goss writing Eps for S4?

It's usually both, meaning it indicates what we think the "out" of the scene is for the director, but also often includes prose that indicates the emotional punch for the actor. #OutlanderALN https://t.co/OuBZZJOcTb

@OutlanderWriter #OutlanderALN Was that really @SamHeughan up in the ship saving Hayes? No rope, no stunt man? My heart was in my throat!

Yes, he was! As was James Allenby-Kirk who plays Hayes. They did have safety harnesses on, which were removed in post. #OutlanderALN https://t.co/700qO5IIwQ

Did you use special effects to dry Mr. Willoughby's poem away? #OutlanderALN pic.twitter.com/DysgysFOog

What's the origin of the song the sailors were singing? #OutlanderALN

@OutlanderWriter From a writing perspective, was it a difficult transition from the familiarity of Scotland to the unchartered voyage ships and beyond? What excited you most about this drastic change of setting? #OutlanderALN

Shooting on the ships was unchartered territory (pun intended), but it was exciting — it's rare in TV shows that you get to drastically change your surroundings episode-by-episode. #OutlanderALN https://t.co/iLCijmXC18

@OutlanderWriter #OutlanderALN Great episode overall, but opening with Jarrod in Scotland was confusing as he is supposed to be in France. Obviously the practical reason is one less scene and one less set, but what is the "story" explanation here?

Though based in France, Jared does business in the U.K. so it seemed plausible that he would be relatively nearby and able to help Jamie and Claire. #OutlanderALN https://t.co/7Qe8a4rp9G

Great directing. Will we see more of David Moore? #OutlanderALN

Yes, he directed next week's episode "Heaven & Earth." It's not to be missed. #OutlanderALN https://t.co/Q1UNMqS68j

Where could I find the script pages for #TheDoldrums ‘ monologue of Mr. Willoughby? It was so beautiful #Outlander

It's not a Q & A. It's called Outlander "About Last Night" because we invite questions after the previous night's episode airs! We answer on Tues so those not in the U.S. will have seen it too! We chose a variety of questions which arrive over those two days! 🙂 https://t.co/gkapy6ziAY