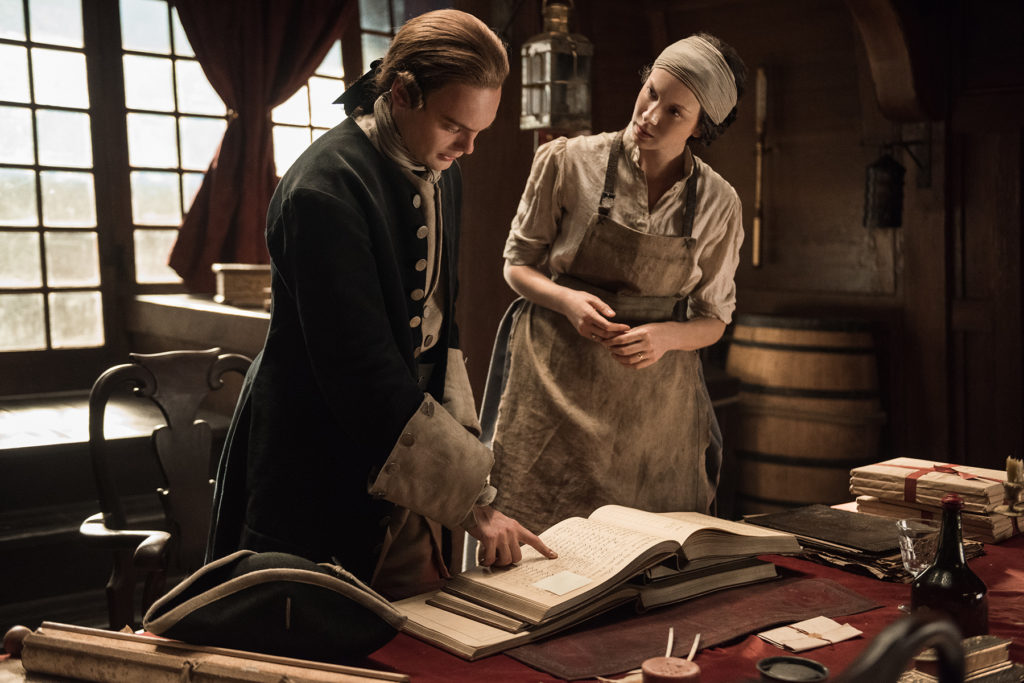 Claire (Caitriona Balfe) has been ship-napped, the sails have been released, and she is moving quickly away from Jamie (Sam Heughan). What is going to happen? It is another week with an opening from Jamie’s point of view, and those are my favorite openings when we see what he is doing or was doing during a point when we watched what was going on with Claire.  Jamie and Fergus (Cesar Domboy) are having a sweet moment over how Fergus is trying to impress Marsali (Lauren Lyle) (even though Jamie is attempting to make it about him…again) when Fergus sees the sails released on the Porpoise. Jamie goes into “oh crap” freak out mode and starts randomly ordering the sailors what to do.  However, the Captain (Richard Dillane) sets a screeching halt to his orders when it comes out that he has made a deal with the Captain (Charlie Hiett) of the Porpoise and they will meet up with them in Jamaica.  Jamie is ordered to be taken below, and he takes in one last glimpse of the ship that has Claire sailing into the distance as he is wrestled below.

Meanwhile, on the Porpoise, Claire has accepted that she is here and while she is here she will care for the typhoid-ridden men. She is bossing and ordering the ship scrubbed and making most of the still well men.  We are introduced to Elias (Albie Marmer), a young, sweet, man who will become Claire’s medical partner and adorable protector on the ship. Claire gives lessons on how not to spread typhoid, and we see that men are starting to stabilize and heal with her meals and care. Claire inspects the ships medical records to find the first case of an outbreak and goes in search of the current carrier that is still making everyone ill. He is working in the galley making the food for all the men and is quickly taken to quarantine, making more friends for Claire.

Fergus has come to visit Jamie we see that he still has his pickpocket skills when he deftly grabs a piece of bread to sneak into Milord. Jamie requests that Fergus uses those skills and obtain the keys for his release and is taken aback when Fergus replies with a sharp “no.” Jamie goes right for the gut, telling Fergus he must not know what love is because he will not do this so he can rescue Claire. Low blow Jamie, low blow. I mean Jamie is straight up harsh to Fergus.

Back on the Porpoise, a funeral at sea is held, and one of the persons buried is Elias’ good friend. He and Claire have another bonding moment and he presents her with is lucky rabbit foot his now passed mother gave him. We meet the goat tender Annekje Johansen (Chanelle de Jager) and her ill husband who is not ill with typhoid, but with drinking the alcohol, Claire had distilled for cleaning purposes. We get a great Claire moment when she reaches her frustration level and shows she has the mouth of a sailor. Claire sees a Portuguese flag and goes in search of which ship it was that was encountered. Captain Leonard is not in his quarters and goes through his logs on her own.  It wasn’t the Bruja that was boarded but another Portuguese ship. She finds that a Harry Tompkins on the ship has recognized Jamie as Alexander Malcolm and he will be turned in once they reach port. Claire has another run in with the cook, and she even threatens to lie about him attacking her (very UNclaire like) if he doesn’t leave her be.  I felt that moment went against who Claire is. We get a voiceover explaining what we just watched.

Marsali and Fergus have a loving moment where Fergus is telling her what Jamie has asked of him. Marsali explains if Fergus is taken as well, there will be no one left to protect her on the ship. They come close to Marsali losing her virtue and Fergus saves the moment. Marsali points out how Fergus is like Jamie with his loyalty. I need to add “HELLO FERGUS!!!” We have a new sexy lead in the lineup, and he is working on taking the title. Cesar Domboy is perfection for this role.

Claire is using her sleuthing skills at attempting to find out who Harry Tompkins is. Claiming he may also be a carrier of typhoid, once she realizes it is one of Sir Percival’s men from Edinburgh she quickly orders him locked up next to the real carrier. Annekje thanks Claire for her assistance with her drunk husband by giving her cheese, Claire and Annekje discuss the fact that Claire needs to get a warning to Jamie that he is in danger when the ship’s port. Annekje says she will help Claire and that “her goats need grass.” Claire doesn’t understand the statement but thanks her and leaves.

Fergus on a mission to see if the keys are obtainable overhears the men on the ship talking about Marsali and realizes what she said is true, that if he were arrested as well, she would be left vulnerable. He confirms his decision that he will not attempt to obtain the keys. When he tells Jamie that he has not brought the keys and he didn’t even try, he doesn’t even really give Jamie a moment to explode on him. Fergus attempts to explain his decision to an unhappy Jamie.

Claire’s efforts have proven to have worked, and the men are doing well.  She pulls out the rabbit foot and goes up to find Elias. When we hear the music, we know what is coming.  The happy fiddle of the deck is quickly played over with an emotional Bear McCreary solemn tune. Elias is found lying in a hammock, covered in the typhoid rash dying. Claire listens to his final words and comforts him into death.  These are the moments I enjoy watching Claire when she isn’t hard, stern, and constantly stubborn. The evening following Elias’ death and burial, Annekja and her husband find Claire saying they smell land and can assist her with getting a message to Jamie. When the Porpoise makes dock the next morning (not in Jamaica, just a pit stop for the goats to feed in Grand Turks), Claire attempts to sneak away. Her attempt fails when she runs into the Captain and a few of his men, she tries to persuade him to not turn Jamie in but he escorts her back to the ship.

Marsali comes down with the Captain who she has convinced that Jamie will not rebel if released to assist with the sailing between the islands. She tells Jamie that Fergus has done him a great service by not stealing the keys as Jamie wanted. Once he is let out, Jamie gives Fergus and Marsali his blessing to be married in Jamaica as long as it is done by a priest and thanks, Fergus.

Annekja and Claire are working on her escape. Annekja convinces Claire to jump from the ship by using some barrels as a float. The ship is not far from land, and the barrels will take Claire back to the island. Annekja also gifts Claire a bag of money to pay for a ship.  Claire exclaims “Jesus H. Roosevelt Christ!” before she takes the leap and plunges into the depths below.

I was super torn on the episode this week.  I liked a lot of the material but felt that it could have somehow been combined with last week’s episode considering we only have three weeks left. I understand the need to have us bond with Elias, and his death brought me to tears, but we spent a whole episode getting close to a character when he was just around for this week. I also REALLY liked getting a glimpse of Fergus and Marsali’s relationship.  It was needed for us to understand their characters. Does anyone else feel like the show spends more time on secondary character development over the main characters sometimes? Let me know if I am on an island with this.

“After making a leap of faith, Claire washes up on a seemingly deserted island where survival is her only option. Navigating treacherous waters has crippled the Artemis, so Jamie devises a joyful moment for his crew in the midst of devastating setbacks.”