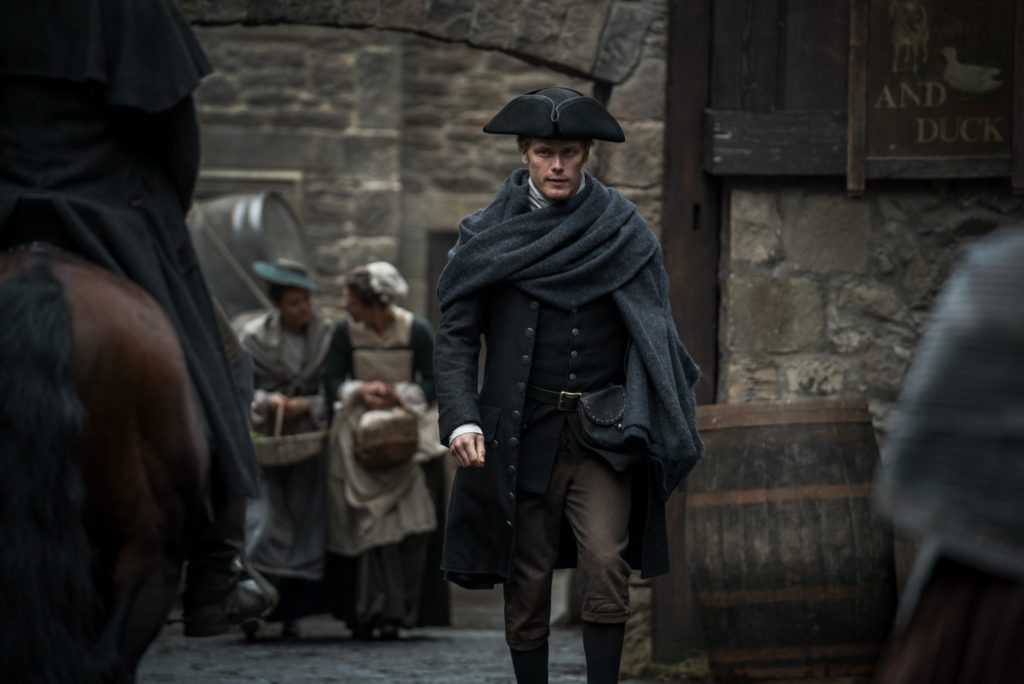 Elle visited the set of Outlander in South Africa and interviewed Sam Heughan while he was filming.  The interview goes in depth on a few storylines from season three.  Below are some excerpts from the interview, but head over to Elle to read the entire thing.

For someone who is supposed to be 20 years older, you’ve aged well.

I disagree with you, actually! On screen, obviously, Jamie does age very well, but I could show you a list of everything we’ve done to him, everything the make-up artists have done. A little gray hair, prosthetics on my forehead, a little eyework. But it’s more his journey, what’s happened to him, about what he’s gone through. It’s really hard to lose someone and find a way to go on.

He barely even speaks. (as the Dunbonnet)

They had it in the script that he spoke a little more, but I thought he shouldn’t. I felt like he should be very quiet. He feels like his actions have hurt everyone around him, and he doesn’t really want to be at Lallybroch. He had built a life there with Claire. He sees her everywhere. There’s one section when we see her appear in front of him, but I think that’s happening a lot. Everything reminds him of her. He’s in so much pain, he’s lost any form of communication. It’s a bit of self-punishment as well.

But when this thing happens to Fergus, he realizes that he’s got this family, and some sort of responsibility to them. Actually, there was a sequence, a fairly large sequence that got cut, where this Scottish Redcoat followed Fergus and found Jamie’s cave, and there was a fight. Jamie ends up drowning him in the river. And I kind of liked that, because we saw this other side of Jamie: this ruthless, feral side. He’s so used to living off the land, eating wild animals, and there’s now something savage about him.

Although serving someone else brings him into yet another woman’s bed!

[Laughs] It’s a little complex! He’s not trying to replace Claire. It’s either done in finding solace, some sort of companionship, or, in Geneva’s case, because of blackmail. And then it means he has a child he can care for, even if he has to do it from afar. For him, having Willie is very rewarding. He’s always wanted children, always wanted to care for them, so it’s heartbreaking when he has to leave Willie behind. And in such a short amount of time to deal with it all! We literally only got one scene there. But he carries Willie wherever he goes now. At least there’s someone else there to live for now.