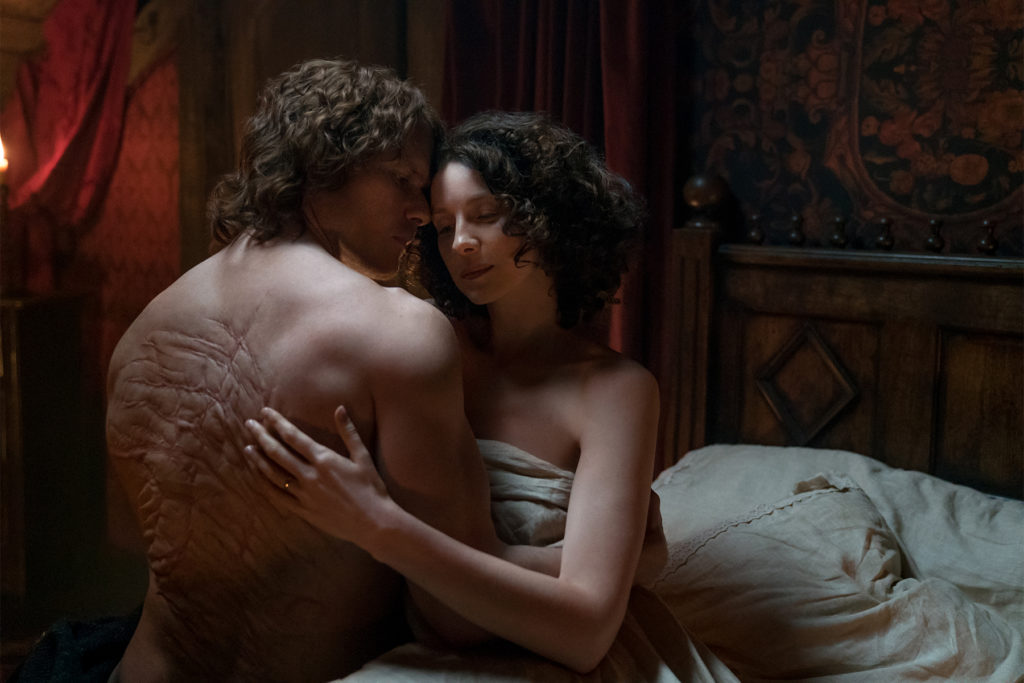 Written by Matthew B. Roberts, Directed by Norma Bailey

This is it! This is the episode we have all been waiting for, the ending to a 20-year long separation. It opens with a day in the life of printer A. Malcolm aka James Fraser aka Jamie aka (Sam Heughan)… you get it. The music is the happy, chipper, everyone is doing fine and dandy theme, Jamie is getting dressed by a Madame, and walking up High Street saying hello to his neighbors like he owns the place.  When he gets to his print shop I thought for sure he was going to touch the “C” in the shop sign to bring us back down from this happy little cloud, but no, he just gives it a good spit shine and continues into the shop.  Once inside we see that happy as he is, you just can’t take the Scottish Highlander out of the Edinburgh printer. He quickly draws his adorable but still deadly little dagger when he hears people that shouldn’t be there on the lower levels of the print shop.

The Scotsmen on the lower level of the print shop know Jamie as Mac Dubh and tell him that Young Ian said they could stay there.  Jamie uses this opportunity to have them run some errands of delivering treasonous pamphlets he has printed proving again that even though he seems to be your neighborhood printer, he still has some secrets up his sleeves. I am struck by the roaring fires that are ­­­ablaze in the print shop.  Are they always going, like all night? I know nothing of 18th-century print shops, so I honestly have no clue.

I know some people are going to have an issue with so much time spent on watching Jamie use the printing press, but I actually thought it was a nice touch 1) because we get to see some more day in the life of A. Malcolm, and 2) because I know since it is real it had to take FOREVER for the crew to build, and it was nice for it not just to be “backdrop” equipment.  I also like that we see Jamie working so we get to see his facial expressions when Claire (Caitriona Balfe) comes in and says “it’s me.”  That means more Sam Heughan eye-acting, and I have become a BIG fan of the eye-acting. When Jamie turns around, we get to see Claire in the halo glow like she truly is a vision, an angel, and it explains his fainting reaction and questioning expressions without the need of a voiceover.  I thought it was great how this week jumped immediately into the episode rather than have the opening credits where they usually are.

When the episode continues, the first “look at/ touching” between Claire and Jamie is heart -racing. It is what we have been waiting for over the last five episodes.  It is what they have been waiting 20 years to do. I did notice the awkward request for Claire to turn around versus the Geneva “you don’t have to turn away” statement. It was so sweet how Jamie asks Claire if he can kiss her, because he still doesn’t truly trust himself, and see Jamie be a complete nervous talker.  Just like old times they are interrupted, this time by Geordie (Norm MacDonald).  When Jamie asks Claire to come to the back of the print shop with him, we get a renewed THIS IS IT feeling, from Claire’s face she does, too. Then he…really puts on a new pair of pants. Claire’s face is all of us, confused, and slightly disappointed.

During the show-and-tell scene, I thought Sam did a great job of portraying James Fraser.  This entire episode is a testament to how he has grasped this character. I love the glasses shame, the hair dye shame, but not the downer of bringing up Faith. The moment Claire tells Jamie about her graduation, we again get to see the drastic difference between Jamie and Frank, with Jamie saying Claire has always been a surgeon.  Jamie dives into a bit of what he has been up to with fathering a son and feeling guilt over Geneva’s death. He asks Claire about Frank and wants to know why has she come back to him.

As Jamie and Claire walk up High Street, she is giving him a little history lesson on what became/becomes of Bonnie Prince Charles. Claire and Fergus (César Domboy) meet again, and the reunion is so sweet.  We see that Fergus is still Fergus with his bit of cocky admission that yes, he has grown into a handsome man. You know any conversation with Jamie and Fergus mentioning Ned Gowan because of Claire’s return can NOT be good.

Jamie and Claire continue to The World’s End pub where we meet Mr. Willoughby (Gary Young). This is a character that I REALLY do not care for in the book series and will admit I wasn’t looking forward to in the show. But, I didn’t dislike him in this episode, so I will give him more of a chance.  He keeps Claire company while Jamie goes to pay his “papist tax.”

Jamie takes Claire home for the evening to his room at the local brothel. What an uncomfortable situation between Claire and Madame Jeanne (Cyrielle Debreuil). Once in the room, Jamie explains to Claire why he has a room at the brothel, and Claire is having a hard time believing that he doesn’t partake in the local activities. Jamie again asks her why she has come back if it was to be his wife or just to bring word of Bree. Okay, here we go, this is it, but no, they are interrupted again. The reunion portion of the episode is parallel to the wedding night episode: the room is set up similar, the interruptions, the voiceover, and “will ye come to bed with me.” The only thing better would have been to add “to bed, or to sleep.”  We also have a call back to my all-time favorite moment from season one where after walking drunk Claire safely back to her surgery, Claire unwinds Jamie’s stock to check his gunshot wound. I want to say a personal THANK YOU to Matthew B. Roberts for including that moment again here.

The slow undressing is pretty sensual. There is a big build up, Jamie and Claire visibly unwind as each layer comes off until they are all are removed, and Claire becomes uncomfortable again. As much as I have missed seeing those back scars, I am feeling as awkward as that moment. Headbutts and weird bed shuffles, bless the awkward; we have all been there. Neither Jamie nor Claire holds back, so maybe the brothel was a good choice after all. I would have liked to see Claire keep her eyes open looking at Jamie in the first escapade since that was a big straw breaking Franks back, even though she did in later encounters, it was missing for that first time.  In the post-coital cuddle, we get to hear one of the most memorable lines from the series, “It’s always been forever for me, Sassenach.”

In the aftermath Claire and Jamie play guessing games as to what Jamie does besides being a printer as Claire appreciates and admires the bodily effects of whatever job it is.  They definitely take their time with the “getting to know each other/reconnection” in this episode. There is no way anyone can say this was rushed.  When Jamie says “because of her (Bree), we live forever, you and I,” I thought it was the end of the episode and such a sweet moment to end on, but no, we see the next morning with Jamie declaring maybe he’s a ghost (hmm), and his struggle to tell Claire something that is weighing on his mind and has been the entire episode. Claire stops him, and I again think this is the ending but no. I will say straight up, I think either of these moments would have been the PERFECT ending to this episode, more so that the ending as it happened, it would have kept with the theme, but to make the episode longer it continues.

Jamie is getting dressed, and Claire is in bed, and we see new versions of previous episodes important scenes, Claire even says “Hurry back, soldier,” after Jamie reminds her that she is a Malcolm NOT a Fraser. All I can think is “uh-oh.”

The next knock on the door is Young Ian (John Bell) and to drive home the point of who he is, not only is he named Ian, he has the same hair as Ian senior. It is a sweet scene with aunt meeting nephew considering the location and suddenness of Claire’s reappearance.

Claire has a moment with the ladies of the brothel, another uncomfortable moment with Madame Jeanne and is sent back up to her room where she finds a man rummaging through Jamie’s things. It all ends with him threatening her and grabbing her. I would have preferred one of what I thought were the previous endings just because they were sweet and carried the feeling of the episode but this is Outlander and if nothing else we are continually reminded that a big portion of the danger of the period according to the books was assault.

What were your thoughts on the episode? Did it live up to your expectations or the hype? Do you think it should have ended with one of the earlier scenes or did you like that it went as far as it did?

“In the aftermath of a violent confrontation, Claire follows her conscience as a surgeon, even though it could put her and Jamie’s lives at risk. At the same time, Jamie attempts to evade the reach of the Crown as its representative closes in on his illegal dealings.”