Running an Outlander news site that has our own reviews and encourages fans’ remarks, I usually get a pretty good feel for the parts of an episode that vocal fans do not like (or at least how a scene is shot or written).  There was a large response to a particular scene in episode 306, “A. Malcolm,” where Claire (Caitriona Balfe) tells Jamie (Sam Heughan) about Brianna.  After hearing about Brianna and looking at the photographs that Claire brought with her, Jamie decides to tell Claire about William (or Willie) by showing her a miniature drawing of his likeness.  Personally, I was a bit confused about why he decided at that moment to share this news.  It took away from the reveal of the daughter for whom he sacrificed his possible future life with Claire.  It came off sudden with a change in mood.  There was not enough emotion from Jamie.  She was the reason he sent Claire back.  Would he have sent her back even without her being pregnant?  Probably.

If Jamie wanted to come clean about his life since Claire left, why did he not include another important detail.  Book readers will know to what I am referring to, but I won’t spoil that for others (I believe this detail will be revealed in episode 308).  That is the only way this works, in my opinion.  With the way it is in the episode, it comes off as a show-and-tell moment with, “So that’s our kid, let me show you mine.”

I will point out that another scene that fans expressed disappointment with was Fergus (Cesar Domboy) reuniting with Claire. There is always the controversy with Willoughby (Gary Young), but I am not going to touch that with a ten-foot pole.  And that ridiculous hair that they have Sam wear or style with his existing hair.  I don’t want to focus on a physical attribute too much because it does not affect the story, but apparently, his hair never grows, and it is ridiculously distracting to watch.

The writers, actors, and producers look at reactions to episodes after they aired, and the easiest way to do this is on social media. I think by Sunday night, they may have received tons of praise, but when you hear about a certain scene over and over again, they might comment on it.

Some fans expressed their disappointment with the lack of emotion from Jaime in response to seeing Brianna’s photos to executive producer Maril Davis.  Her response was to show a photo of how that scene was written in the script.  The tweet has since been deleted, but here is a screenshot of it.  (The whole script can be viewed now in the Outlander Community.) 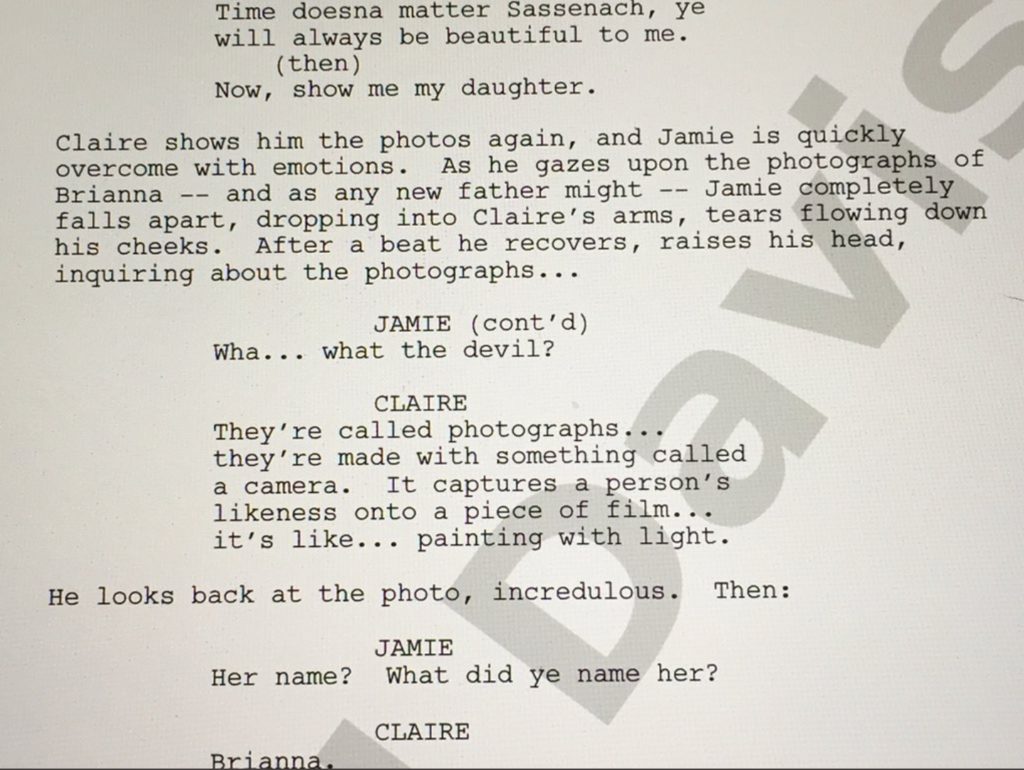 Skip to Tuesday, when the writers, specifically Toni Graphia and Maril Davis stepping in for Matthew B. Roberts, answered fans’ questions about the episode.  They addressed the scene again.

It's our intention that all action lines are filmed. we're disappointed this one wasn't. Will talk more about it on podcast. #OutlanderALN https://t.co/J6MGsC1g4A

The next day, they clarified their statement.

Just to be clear, disappointed we didn't meet fan expectations. NOT disappointed in powerful, emotional performance of @SamHeughan #Podcast https://t.co/sQXFfphAQ8

I use action lines as guide only "Falling apart" doesnt have to mean tears, can be internal. Was my creative choice. Plus felt melodramatic https://t.co/nHxny45uQy

And to be clear, process is organic and collaborative. Sometimes details are lost in exchange for others. Drama.x #adaptation https://t.co/PeqqIpYlKz

The official Outlander podcast is not up yet, but I am sure there may be more discussed regarding this scene.  We also don’t know director Norma Bailey’s take on this scene and would be interesting to have her comments.