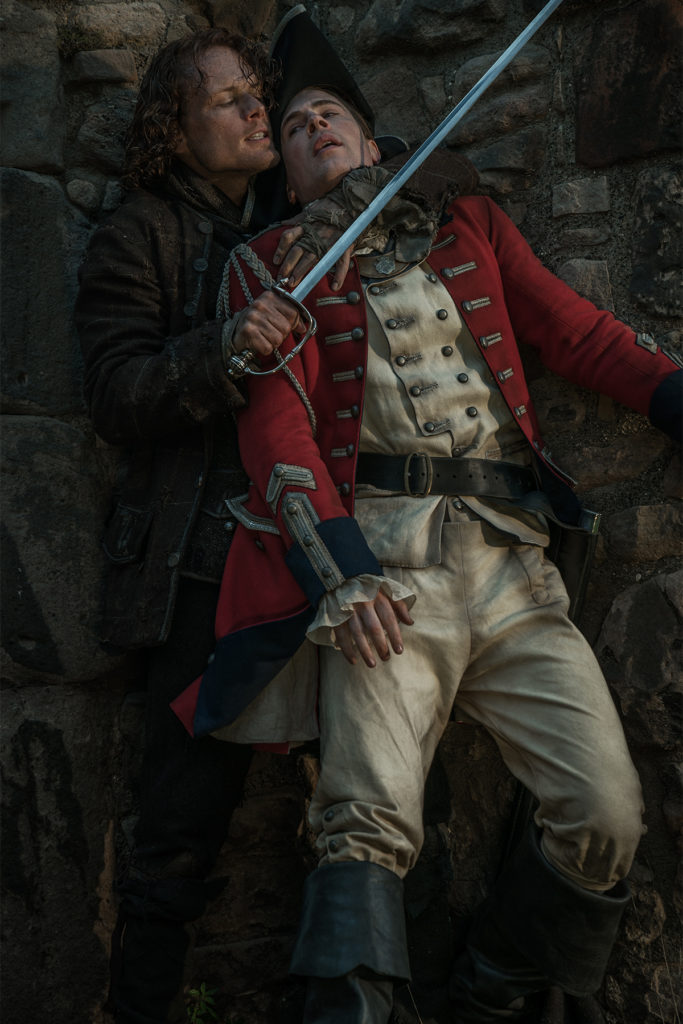 Written by Matthew B. Roberts, Directed by Brendan Maher

They say the best-laid conflicts are exposed over the dinner table but what about a traditional English breakfast? After young Brianna (Gemma Fray) came home asking if Papa Frank (Tobias Menzies) could serve her toasted Eggo waffles, he’s all like, “No dear daughter, the British are coming to breakfast.” Sadly as the years pass, Claire (Caitriona Balfe) and Frank’s marriage gets progressively more miserable.

Claire and Frank have a veiled conversation over black pudding. While Sam Heughan’s acting has been praised these past few episodes, and with good reason, we can’t overlook the strength of the scenes between Menzies and Balfe. Every word, every glance between the two of them has a double meaning, and it’s heartbreaking when you see traces of the way they used to love each other.

“We agreed we were free too…” Frank says, calmly defensive.

Meanwhile in Ardsmuir Prison in 1755, Jamie (Sam Heughan) has, of course, garnered the respect of the entire prison population, who have coined him Mac Dubh. Of course, the current governor of the prison has dinner with Jamie once a week, which is something he recommends to the incoming governor, a handsome baby-faced soldier with cheekbones that could pierce through diamonds.

As the outbound Ardsmuir governor continues to give Governor Cheekbones a tour around Hotel Hell, he informs him about the myth of the Frenchman’s gold.

“Whoever finds that would certainly garner the attention of the crown.” He tells the newbie, who looks intrigued and terrified.

Is the baby-faced newbie governor…

IS IT JOHN GREY? (David Berry)

As I continue my weekly Outlander over dramatic breakdowns, Jamie talks with a sense of familiarity to a heavily bearded and rather ill prisoner who holds onto a piece of tartan, which has been outlawed by the British.

Is that ill prisoner….

IT IS MURTAGH! (Duncan Lacroix)

While I took a celebratory swig of wine, Jamie jokes to his loyal kinsman that the new governor looks like he has a ramrod stuck up his ass. Murtagh retorts that it must be “standard issue in the British army,” and suddenly even though they’re both imprisoned everything seems right with the world because they’re together on screen again.

Baby Face Grey is appalled that a prison has rats.

The new governor orders that a cat is brought to his quarters, and also that each cell should be provided with a cat to rid the place of the rats. You can practically see Jamie scoffing internally, and he snarkily informs him that taking such an action would take away possible food for the prisoners.

Clearly, Grey is being set up as an important character, but I’m wondering how exactly. Will he eventually turn sympathetic towards Jamie and help him escape?

Can you imagine how proud Jamie would be of Claire earning her medical diploma?

Joe Abernathy (Wil Johnson) and Claire got their diplomas baby! Abernathy doesn’t even have to say a word, and I love him.

Frank keeps insisting that the reservation Claire made for her graduation party was at six, but Claire knows it’s at seven. Again there are subtle layers to this conversation. Why is Frank so eager to get Claire and her medical friends out of the house?

Claire greets the answer to my question at the door.

“Your work I presume?” You can see Frank bracing for the impact as his mistress timidly stands by his side.

We transition from the most awkward graduation party of all time to a man raving in the road about cursed gold, so naturally, the British soldiers intercept him (have they learned nothing from Pirates of the Caribbean?)

Grey attempts to make a bargain with Jamie. He’ll have his irons struck off if he speaks to the prisoner, who has been raving in French and Gaelic, languages in which Jamie is known to be fluent. Jamie tries to counter by asking if the men could be allowed to hunt for their food and be given medicine, but Grey refuses.

Not one to give up, Jamie agrees to translate the man’s ravings in exchange for medicine for Murtagh. The bromance has survived Culloden and rats. Nothing can separate these two now.

However, Frank and Claire have an entire ocean of separation between them even though they’re in the same room.

“You invited her here where our daughter lives?” Claire seethes at Frank, who stands his ground. Menzies cool as ice attitude is the perfect counterpoint to Balfe’s fire.

Claire accuses Frank of inviting his mistress to spite her, and he finally snaps.

“Maybe I wanted to give you a taste of your own medicine Doctor Randall.”

What’s great about these scenes is that there are no taking sides. You can understand exactly why both Claire and Frank are upset and feel the lingering sadness as they angrily spit nasty things at each other.

I mean, in a twisted way, why would Frank even care about hurting Claire if he didn’t still love her in a way? (DEAR YOUNGER, MORE IMPRESSIONABLE VIEWERS: DO NOT TAKE THAT AS A HEALTHY SIGN OF LOVE IN ANY WAY, SHAPE, OR FORM.)

Frank finally loses his cool when the thought of the possibility of losing Brianna in a divorce comes into the conversation. Menzies is in absolutely fine form this episode (but when is he not?) Divorce is off the table. For now.

Throughout this episode the mere thought of Claire surviving is the dash of hope Jamie clings to in order to stay alive. When Murtagh speaks of her and the “Wee bairn she was carrying,” you can see Jamie desperately trying not to be too optimistic about the possibility of seeing his child, but he just can’t help but hope. Especially when the raving man, Duncan Kerr speaks of the possibility of a La Dame Blanche being nearby.

“She seeks a brave man…A Mackenzie!”

Naturally, Jamie uses this as an impetus to escape one day when the men are herded out to hunt.

What I didn’t expect was for Jamie to return to prison and take Grey captive. I loved the flashback to the first time Claire and Jamie met the younger Grey (and it was immensely refreshing to see Claire with Jamie in the same scene. Don’t judge me, I’m desperate!)

My heart broke when Jamie revealed he escaped to explore Kerr’s ravings about the possibility of a La Dame Blanche being nearby.

Jamie returned to prison because Claire wasn’t there.

The continued dynamic between Jamie and Grey is a storm of complexities. Jamie bends the knee to Grey (I apologize for my numerous Game of Thrones references!) essentially surrendering to execution, but Grey refuses to kill an unarmed prisoner.

That scene where Grey and Jamie look out at the gorgeous green Scottish highlands? Stunning.

You can tell that Grey is completely fascinated by Jamie when they later converse over the weekly meal. Jamie finally drops his guard down and speaks of Claire. It’s a true sign that Grey feels like he can trust Jamie when he confesses how he loved a man who was lost at Culloden.

David Berry has done an excellent job so far of fitting in seamlessly into the world of Outlander. The moment when he attempts to touch Jamie and Jamie immediately puts his guard up again is another sad moment. You can see Grey’s face fall the way Claire’s did earlier in the episode.

Outlander doesn’t let us forget that Jamie was raped. I’m curious to see how this will impact the relationship between Jamie and Grey going forward.

If only Jamie could see how his Brianna was blossoming. The most touching moment was watching Frank cry out, “That’s my girl!” as he and Claire watched Brianna walk the stage at her college graduation.

Can we have a moment to appreciate Tobias Menzies? The man had the task of taking on not one, but two roles of characters that interfere with the happiness of the main couple. While Black Jack Randall could have easily devolved into a mustache-twirling villain, Menzies gave him a depth of intricacy that nearly made you understand the man.

Nobody would feel sorry for Black Jack, but Menzies made you understand his motivations. Frank is on the opposite side of the sympathy spectrum. Can you blame Frank for wanting to divorce Claire to marry a woman that loves him?

On a side note, the moment of Claire getting Frank’s paramour’s name wrong was a nice little dose of humor that was sorely needed in the Claire/Frank scenes. Also, Claire’s 60’s hair is perfect, and I can’t help but get excited because I realize that means we’re reaching the period we left off with at the end of the second season.

What I didn’t expect was for poor Frank to die in a car accident in the same scene.

The moment where Joe informs Claire is heartbreaking. Frank’s death was a foregone conclusion since season two’s season finale, but I didn’t realize it would happen like this.

Poor Frank.  He died as he lived, quietly and without fanfare.

What I wondered was, did Claire tell Frank’s spirit/corpse that she did love him out of guilt, or because she truly loved him once? I surmised that it was a mixture of both. I know I’ve been dying to see Claire and Jamie reunite, but I can’t help but be saddened that Frank had to die in such a manner before he had the chance to be loved again.

Oh, Tobias Menzies. I salute you, sir. You will be missed. Please come back as a Frank ghost and rant to Brianna about American tea being like paper diapers.

Claire and Frank part ways once and for all, as does Murtagh and Jamie. (Please let this not be the last we see of Murtagh.) Grey ends up attempting to redeem himself in Jamie’s eyes. While he can’t officially free him, Grey can send him to work. Jamie is off to the Dunsany residence. I have no clue what might happen there, but I have a strong feeling this isn’t the last we’ve seen of Grey either.

Until next time Outlander fans! What did you think of the episode? Am I questioning things that are obvious? And can someone please keep me away from the Outlander Wikipedia page? Until next time!

“While serving as groomsman at the aristocratic estate of Helwater, Jamie is reluctantly pulled into the intrigue of a noble British family. In 1968 Scotland, Claire, Brianna and Roger struggle to trace Jamie’s whereabouts in history, leaving Claire to wonder if they will ever find him again.”

Photos and clips courtesy of Starz