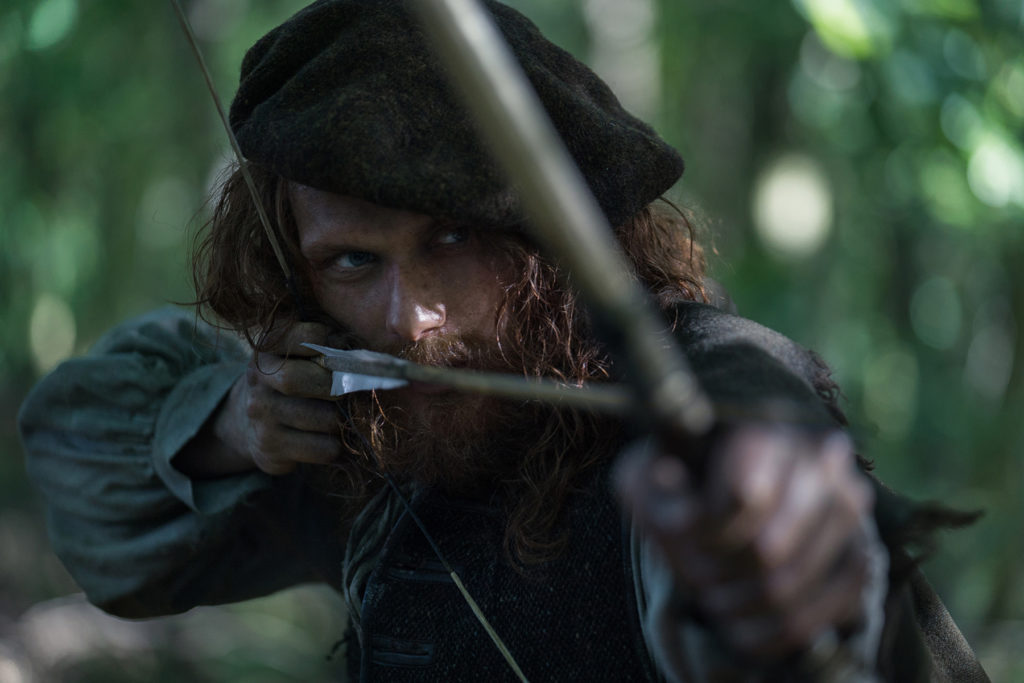 One “Red Jamie” for an emergency haircut and shave.

Okay, so there’s a bounty on his head. The British are hell-bent on capturing the Dunbonnet and Red Jamie, and Fergus does a fantastic job of keeping their suspicions firmly aimed at Lallybroch.

Welcome to Scotland six years after the rebellion.

Jenny (Laura Donnelly) is pregnant with another bairn, and Fergus (Romann Berrux) wants to fire a pistol. Apparently, boys will be boys no matter what century. Fergus, little Jamie Murray (Rhys Lambert), and Rabbie McNab (Stuart Campbell) unearth Papa Ian’s (Steven Cree) old pistol locked away in the dovecote. Young Jamie declares that it is rightfully his but Fergus is like, “But did you kill an actual British soldier?”

Captain Samuel Lewis (Rufus Wright) of his Majesty’s Tenth Dragoons swaggers over to poor Papa Ian, who is being mistreated by an asshole Scottish redcoat. Lewis is savvy and realizes that Red Jamie and the Dunbonnet must be one in the same.

Jenny reminds us if we missed the handy title card at the beginning of the episode that the rebellion was six years ago and they had yet to see her traitorous sibling.

Asshole Scottish Redcoat, aka Corporal MacGregor (Ryan Fletcher), gleefully arrests Ian and I have a feeling that’s not the last time he’ll be causing chaos for our heroes.

Ian is carted away as Robin Hood observes from the shadows, and then goes on the hunt for a stag.

Boston has nothing on this Scottish scenery. It’s lush throughout the episode, and the scene of the stag darting through the forest with the sunlight filtering through the trees is just gorgeous.

“Ye scared the bowels out of me!” Jenny tells Jamie, crushing his vision of Claire as he returns to Lallybroch with the dead stag.

Sam Heughan’s transformation into a bearded outlaw is stark, especially in the shot where he’s looking at Dream Claire/Jenny. The gray shadows hit his face in just the right spots, and you can’t help but think he would look terrifying to someone who only knew him as the fearsome traitor Red Jamie.

It’s especially evident that our hero has lost his spirit as Jenny talks to him when they butcher the stag. Jamie has yet to say a single word this episode. Jenny continues to be the badass sibling that she is by stating what we’re all thinking.

“James Fraser hasn’t been here in a long time.”

Meanwhile, Claire (Caitriona Balfe) is in the midst of the throes of a passionate dream I’m sure many an Outlander fan has had (don’t deny it). Just the thought of nude Jamie has Claire all a tizzy

Frank (Tobias Menzies) on the other hand, struggles to get Claire to connect with him throughout the episode, although Claire sure as hell tries to reconnect with him physically.

The scene with Claire and baby Brianna is adorable. Brianna is Claire’s light in dreary Boston in 1949, and her delight in Brianna turning herself over ahead of schedule is so contagious, you just want Jamie to feel it across space and time.

Jamie has made himself a home in a cave near Lallybroch, and you can see the fear and annoyance in his features when Fergus visits, declaring he wants to learn how to shoot Ian’s pistol.

Fergus, with all the bravado of a young teenage boy, insists that he needs to be able to defend Lallybroch during the next rebellion. Jamie finally growls out full sentences, telling the boy that there will be no more fighting.

“Just because you’re a coward now doesn’t mean I am!” Fergus yells.

You can tell that stings Jamie to the core. He orders Fergus to return the pistol to its hiding spot because weapons have been outlawed.

Jamie returns to Lallybroch, and poor Mary McNab (Emma Campbell-Jones) has feelings for him. You can see her face fall when Jamie gruffly states he came to see the ledgers. They’re interrupted by Jenny’s cries, full in the throes of labor.

Adorable little Jamie Murray spots a raven. Rabbie fears that the raven is, according to his gran, a harbinger of death, and states that they have to get it to caw caw away from the house, or else the bairn will die.

Ironically, Fergus nearly brought death to the bairn by choosing to shoot the raven, therefore alerting British soldiers nearby that someone at Lallybroch was harboring an illegal weapon.

All hell breaks loose when British soldiers invade the inside of Lallybroch, but not before Jenny uses the chance to ask Jamie as he holds her newborn Ian when the last time he was with a woman, physically?

Because of course, that’s what you ask your brother right after you give birth. God bless Jenny Murray.

And the award for terrible timing goes to Jamie for cradling the newborn just as the British soldiers start tearing through Jenny’s room, demanding she turn over the weapon and questioning whether or not she just gave birth.

Jamie hides in the corner of the room thinking, “If only we had a fourth amendment against this sort of thing.”

Jenny continues to win awards for badass of the year by claiming that the baby was stillborn. Captain Lewis orders the asshole Corporal MacGregor to bring forth the midwife with the supposed stillborn when Mary McNab is like, “HELL NO.”

Brave Mary produces the pistol, claiming that it was her late husband’s weapon. Mary and Jenny play off each other cover stories beautifully, and MacGregor is all ready to haul Mary’s poor soul to prison, but the Captain is convinced of their innocence. He has what they came for.

Savvy Jenny realizes that the Captain won’t stop in his hunt, however until he has Jamie “hanging from the end of a rope.”

Speaking of a land where there is a fourth amendment protecting against unwarranted search and seizure of one’s home….Claire slyly attempts to seize Frank’s desire.

“I miss my husband,” She says huskily.

Which husband? I ask Claire, who of course is too busy riding Frank to reply to me.

I’m sure Claire would be in an absolute rage if she the knew the fate that befalls poor Fergus in the next scene. The British patrol from hell has returned kind Ian (who sounds like he’s returning from a night out with the boys: “That was fun y’all! Till next time!)

Corporal McDouchebag gives Dean Jackson a serious run for his money of ultimate asshole of the season by following Fergus in an attempt to see if the boy leads them to Jamie. Fergus, being a teenage boy with no sense of his mortality, leads them around in circles. Instead of escaping back to the safety of Lallybroch when he has the chance, Fergus continues taunting Corporal Dumb and his associate Private Dumber until another set of British soldiers on horseback knocks Fergus off of his feet, allowing the Corporal to pin Fergus down and slice Fergus’s hand off with his sword.

(Somewhere Jaime Lannister is like, “Been there, done that.”)

You can see poor Fergus struggling not to lose consciousness, as Jamie races to him, fashioning a tourniquet around the boy’s arm as he hauls him back to Lallybroch.

“I’ve seen Milady do it countless times,” He told Fergus, and then you realize that the reckless boy may not have made it if Jamie hadn’t witnessed Claire in action as a healer and nurse.

Sam Heughan is positively phenomenal this episode. Your heart shatters with Jenny when Jamie finally breaks down, believing he should’ve stepped out to rescue Fergus.

When he tells the boy, “Ye remind me I have something to fight for,” the audience finally sees the fighting spirit in Jamie start to rekindle. Claire and Jamie are both utterly crushed in their spirits being separated, but each half of our star-crossed couple are desperately clinging to signs of hope to motivate them to move forward.

“Madam has been most generous with the whisky…although you do know I prefer the taste of French wine.” I think Fergus will be just fine.

Claire and Frank are wining and dining with marvelously witty Millie and her husband, which leads to Claire’s Operation Seduction: Part Deux. Their love scene is a somewhat sad callback to one of their first love scenes in the very first episode. While the scene in the very first episode was sweet and allowed Claire and Frank to reconnect truly, this moment is interrupted by Frank’s longing for emotional intimacy.

His wife won’t look at him.

Needless to say, the next time Claire and Frank meet at night, it’s in separate beds.

Ian demonstrates an understanding of Jamie’s pain far beyond Jenny’s belief that he’ll just be happy if he remarries again.

Did he just compare phantom pains to Jamie’s spiritual brokenness and loss of Claire because she was his heart? Darn it, Outlander! Stop breaking my own heart!

Jamie asks Jenny and Ian to turn him in so they can collect the reward money. He’s not the sort of man who likes burdening the people he’s supposed to be protecting. By turning himself over, Jamie is effectively regaining agency over his life.

Our heroine in the meantime is also attempting to regain control of her own circumstances and what better way to do that than the return of her voiceovers? (I missed thee!)

Claire’s life in Boston isn’t bad by any means. But as she tells us, with Jamie not only did she have a life with the man she loved, she had a greater purpose. The transition from her kitchen knife to the doctor’s scalpel was beautiful and symbolic of everything she was saying.

Claire Randall has signed up for medical school like the badass she is. It’s positively cringe-worthy to watch as one of her classmates refuses to budge when she tries to take a seat. The white male students look at her like she’s an alien from the planet Woman.

The awkwardness is saved by one single question.

“Is this seat taken?” Joe Abernathy (Wil Johnson) asks, winning Claire and me over in a single sentence.

I wonder if Claire will ever find out about Jamie’s night with Mary McNab? I mean you can’t blame Jamie, and I like that Mary doesn’t attempt to replace or demean Claire when she visits Jamie in his nature apartment. (Besides, I can’t get mad at the woman that saved Jenny from the British soldiers and shaved Jamie back to his old self. Bless you,  Mary.)

Jamie’s awkwardness towards Mary’s advances is endearing and heartbreaking. A single tear runs down his face as he surrenders to the bonny lass in front of him, and you can tell exactly why he’s emotional about it.

He thinks he’s being unfaithful to Claire.

The next day, I’m nearly as fooled as the British soldiers are when Jamie walks into Lallybroch looking and sounding like his old self. It took a moment to realize that Jenny had agreed to go along with his scheme to get arrested.

Time continues to move painfully slow for Claire and Jamie, but I love that we get to see what both of them go through in the twenty years of separation. Their inevitable reunion will be the ultimate payoff.

My question is, how does Claire make it back? How much longer?

Jamie is carted away, as Claire hears the comforting sound of bagpipes, and I make a vow to never complain about a long-distance relationship ever again.

“In prison, Jamie discovers that an old foe has become the warden – and now has the power to make his life a living hell. Over the years, Claire and Frank both put their best foot forward to share a harmonious marriage, but an uninvited guest shatters this illusion, bringing their differences to light.”