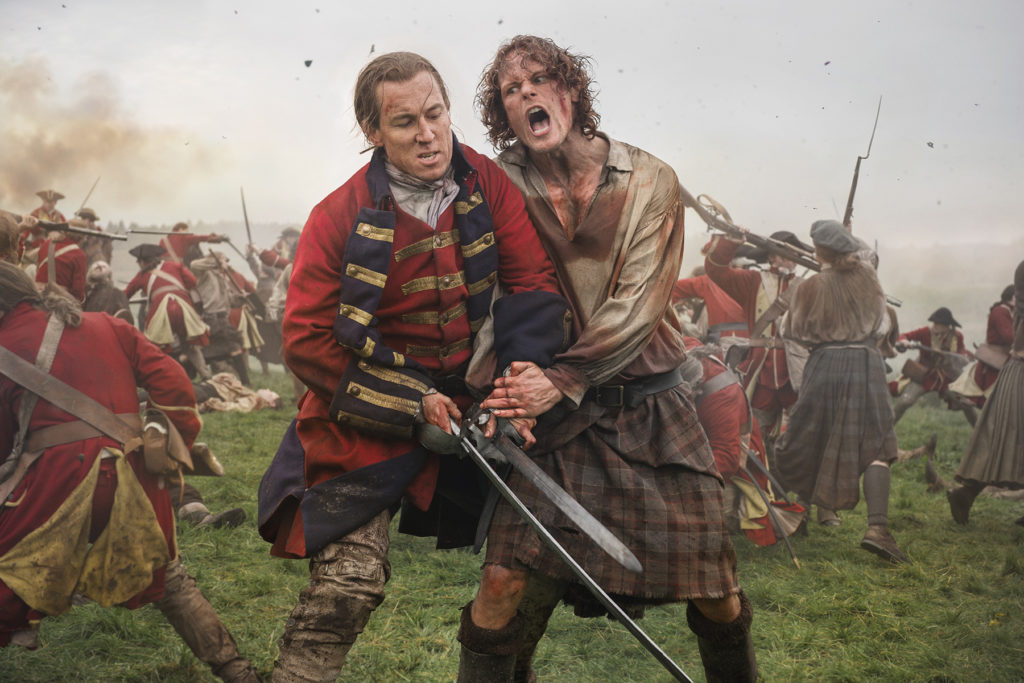 “Otherwise Known as the Episode One Review of Outlander Season Three”

It’s felt like 200 years since we last saw Claire (Caitriona Balfe) declare that she had to return to Jamie (Sam Heughan) at the stones at Craig na Dunh after learning he was still alive.

Lying vulnerable and wounded on the desolate battlefield in the midst of thousands of dead Scots, poor Jamie has certainly seen better days. A light snow begins to fall, a paradoxical sign of tranquility, the only thing illuminating the countless dead in the aftermath of the Battle of Culloden.

Of course, Bonny Prince Charlie (Andrew Gower) is boozing it up on the battlefield in one of Jamie’s pre-battle/battle flashbacks. At least he got in one last “Mark me, Jamie.” before lunchtime was interrupted by British cannon fire.

There was a dead Redcoat on top of Jamie’s nearly lifeless body in the opening.

“Is that Black Jack?” I wondered. “Did he really stay alive after getting his nether regions mercilessly stabbed only to be dead in the first five minutes of season three?”

The moment where Jamie and Back Jack (Tobias Menzies) clash for the final time on Culloden Moor is the moment where suddenly the battle becomes awash in red heat and light. It’s not clear whether Jamie is actually responsible for killing Black Jack, but to put it poetically,

The contrast between the heat of the battle and the cold aftermath is stark. Jamie sees a vision walking through the lifeless soldiers, his love, his La Dame Blanche. “Are you alive?” Dream Claire inquires of Jamie, and that was the story of how I died.

On a side note, the transitions between Jamie’s timeline and Claire’s were really well executed. We see the dragonfly in amber shine in the dark snowy battlefield, a symbol of the hope that Claire is to Jamie, and then the episode transitions to Boston in 1948.

There’s no older Claire in this episode, so for all present Claire knows is that the love of her life is dead. Frank (Tobias Menzies) is not.

What’s great about the show is that it never demonizes Frank in order to make Jamie look better (not that Jamie would need any help looking better, but I digress).

It’s sweet when he tells Claire that he would be happy with whatever she cooks him. Our heroine is technically back in her right time, but this episode does a great job of showing ironically, that by going forward in time, she’s actually going backward in terms of what she’s allowed to do, think and feel.

The reality truly seems to hit her when Frank takes her to meet Dean Jackson (Colin Stinton) at Boston University. While she’s spent most of her introduction in this episode relatively subdued by Claire standards, her inner fire is rekindled when she discovers that the Dean is a SEXIST CHAUVINIST JACKASS. How dare Claire have an opinion about the American presidential race!  I imagine every woman watching felt that similar rage when the Dean made a crack about Frank keeping his eyes on his wife’s reading habits. (SPOILER ALERT DEAN JACKSON: DEWEY LOSES.)  You can practically hear Frank’s inner monologue: “Just shut up now while you can you foolish man. Please don’t kill him, Claire. I love you and your feminist ideals, but I also love this job.” Tobias Menzies’s facial expressions say it all. “Claire was a combat nurse in the war,” Frank tells Dean Jackson proudly.

Throughout the episode, you see just how much Frank really does love Claire in spite of everything. His attempts to stand up for her to the man that is his boss is a sweet example, although it just sets off Dean Chauvinist even more.

While Claire might have an ally in Frank somewhat, it’s sad to see just how much she has to continually restrain her spirit in order to fit into her own time.

Meanwhile dear Rupert (Grant O’Rourke) has not only survived Culloden as well but has managed to haul Jamie away into a barn where other Scots are hiding out. “What happened to Murtagh (Duncan Lacroix)?” Jamie asks weakly. Probably crossed timelines just to off Dean Jackson for Claire.

The poor men are discovered by British soldiers, their clean red coats a harsh contrast to the exhausted and bloodied Scots. It’s sad that they survived the battle, only to be sentenced to be executed as traitors in the aftermath.

How is Jamie going to survive this when he can’t even move to attempt to escape?

Claire continues to break hearts worldwide as she glances at a small bird that flies near her window. The tiny creature is free to spread its wings and soar to wherever it pleases, while Claire is trapped inside her gilded cage.

They say that a healthy couple needs to argue on occasion, but do the arguments need to include flying ashtrays?  Claire has been keeping emotions in check far too long this episode, and we finally see her emotions boil over the surface when her conversation with Frank about her potentially applying for American citizenship evolves into a full fledged argument.

The real arguments are about the unresolved tensions lingering underneath the surfaces of discussions. Claire recoils whenever Frank attempts to touch her, but she doesn’t understand why that’s the real reason why he’s so angry.

“You need a good fuck and you can’t find one!” She yells, finally losing her restraint.

THAT’S THE CLAIRE WE KNOW AND LOVE.

“Well, I’m not the one who’s been fucking other people!” Frank flings back, and that’s when Claire throws the ashtray at her husband.

The shot where see both Claire and Frank in the frame of the argument’s aftermath is just sad. While Claire and Jamie were both so fiery they’d set the whole world ablaze with their passion, Frank’s spirit is like the quiet drops of snow silently falling on the dead soldiers on Culloden Moor.

Meanwhile, the British soldiers are executing the Scots in a summarily polite fashion, asking one by one who would like to go next almost as if they’re inviting them to tea.  We are like Jamie in the scene, only able to hear the survivors perish amidst the sound of the rapid gunshots. (Poor babies McMartin (Ryan Ralph Gerrard) and McBean (Rory Barraclough)!)

Suddenly I’m crying over a conversation about snoring and farting as Rupert bids farewell to Jamie. When Rupert mentions how it’ll be nice to see Angus again I find myself wanting to fling multiple ashtrays at the British soldiers.

One of the last remaining members of the Scotsmen we’ve come to know and love these past two seasons is gone as we hear the sound of a gun fire once more.

Frank is interrupted writing a secret letter to the Reverend Wakefield inquiring about a 18th-century Scottish Highlander by Claire’s announcement that her water broke.

Perhaps the editor was just wanting to torture us all by having Jamie volunteer to die in the next scene.

“Let’s just get this over with,” Jamie insists, and once again I found myself yelling at the screen, “YOU CAN’T DIE IN THE FIRST EPISODE JAMIE FRASER THIS ISN’T GAME OF THRONES!” (No whiskey was involved in the writing of this episode recap.)

Who would’ve thought Jamie would’ve been saved by his choice to spare the life of one young British soldier named John Grey in the last season? (Now that’s what I call good writing!)

“John Grey is my younger brother,” the commanding officer, Lord Melton (Sam Hoare), whispers in Jamie’s ear and that was the story of how I died for the millionth time in this episode.

Older Grey considers himself duty bound to honor the life debt that his family owes Jamie. He arranges for Jamie to be smuggled out and set on his way to eventually reunite with Claire.

My mind has been running through various epic reunion scenarios in which Jamie and Claire run to each other on an open green field and kiss passionately as the music crescendos and then Jamie’s just like, “What happened to yer HAIR Sassenach?”

I’m 210% certain Diana Gabaldon came up with a far better reunion scene than I did.

Claire is carted away by a male doctor that tells her not to panic without looking at her once, but not before Frank tells her I love you. She doesn’t respond and suddenly I’m flashing back to all the risky messages I’ve ever sent where the only reply I received was being left on “read.”

It’s terrifying when Claire is put under against her consent. She wants to be awake to give birth but they shove an IV in her and a gas mask and reassurances that everything will be fine. (Was anybody else utterly creeped out by the hospital?)

Claire awakens, her belly flat and we’re all just as terrified as she is, even though we know Brianna’s existence is a foregone conclusion.

Frank walks in, cradling baby Brianna in his arms, and for the first time in the episode, Claire and Frank kiss each other, with genuine warmth.

“Perhaps this is a new beginning,” Claire says, smiling for the first time.

“Am I dead?” Jamie asks the kind faces of Jenny (Laura Donnelly) and Ian (Steven Cree).

“You’ve come home, to Lallybroch.” Jenny replies, and I can finally breathe for the first time.

While Claire and Jamie have yet to reunite, and I’m positively dying to know how they eventually will, for the first time in the episode, I felt actual an actual glimmer of hope.

And then the nurse had to go and ruin it by asking how Brianna got her red hair. And the award for awkward Outlander moment of the century goes to…

“Hiding in an isolated cave, Jamie leads a lonely life until Lallybroch is threatened by redcoats pursuing the elusive Jacobite traitor known as “Red Jamie.” Back in Boston, Claire and Frank struggle to coexist in a marriage haunted by the ghost of Jamie’s love.”