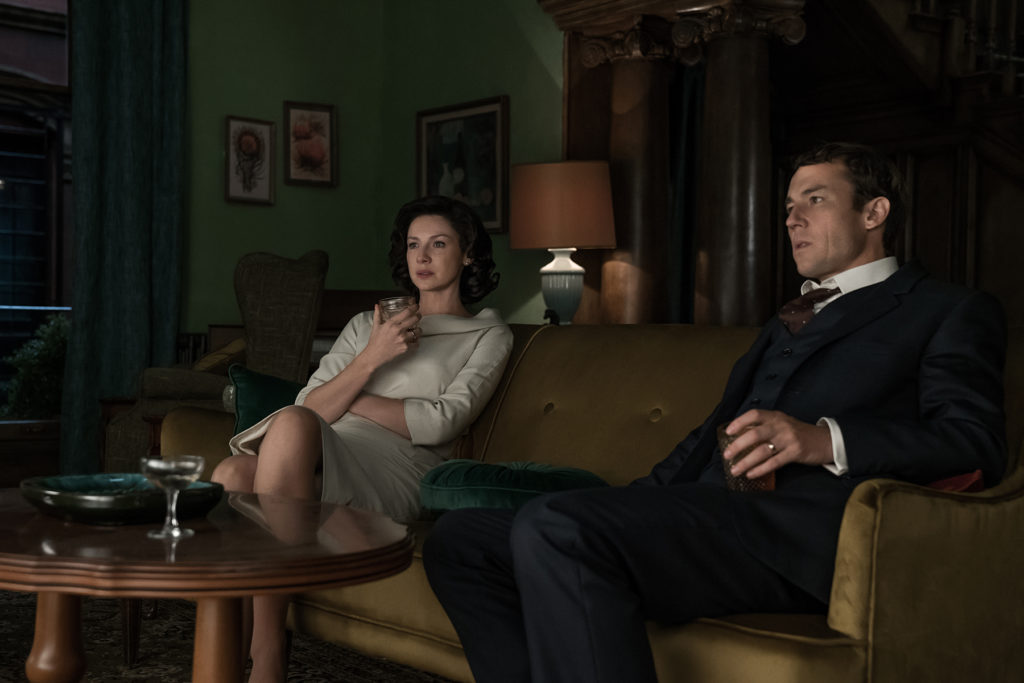 Below are excerpts from new interviews with stars Caitriona Balfe, Sam Heughan, Tobias Menzies, executive producers Ron Moore, Maril Davis, Matthew B. Roberts. Be sure to click on the links to read the full interviews. Since these posts/interviews follow the latest episode, beware of spoilers for the current and future episodes.

When asked who he’ll miss playing on Outlander, Menzies replies, “Am I allowed both? I had a great time doing them, both of them. It was kind of a blast.”

So was the unexpected adoration from women who appreciated both of his bad-boy-good-boy alter-egos, he admits.

“It’s sort of completely unreal though. It’s very nice to know there are some people who have a heart for Jack, I suppose. Whatever that means.”

What changes Grey’s opinion of Jamie? What moment?

“There’s no one specific moment that Lord Grey changes his opinion of Jamie. Throughout the episode he is gathering information and trying to strategize a way of dealing with Jamie. In the process of doing so, he comes to see Jamie as an equal, both in terms of intellect and a deep sense of honor. Jamie has a unique ability to reveal and expose Lord Grey’s vulnerabilities. In the game of chess he plays with Jamie, Lord Grey is caught off guard by his own emotions as Jamie is once again able to expose Lord Grey’s suppressed feelings … this time his homosexual urges … when Jamie tells him about the grief he feels losing the love of his life, Claire.”

Is that the last we’ll see of you on the show?

Tobias Menzies: That’s it. It’s strange. It’s the end of three and a half years. I’ll miss everyone very much. It’s been a great journey. I worked hard on both of these characters. It was a challenge to make them different, but in a subtle way so it wasn’t too obvious. I hope that it worked but one can never really know. My biggest takeaway, I think, is the friends I’ve made. All of them will stay in my life for a long time, so that’s wonderful.

Is there a chance Tobias could return to the show in the future?

Ron Moore: You never know. I hope so. Not this season, but there’s always other flashbacks or dream sequences or whatever. There’s nothing planned but we’re open to that possibility.

Maril Davis: It’s hard to lose him. He’s such an integral part of the show and he’s done such an amazing job. We’re such fans of Tobias just in real life, and it’s hard losing a character you’ve grown to love and is so much fun to write for.

The New York Times: Actor Tobias Menzies on the ‘Outlander’ Death We All Knew Was Coming

We’ve known for a while that Frank would die.

Yeah, I know. [Laughs] Maybe the more interesting thing is how it happens, versus what happens. And how their marriage gradually unravels. We talked a lot about the play “Who’s Afraid of Virginia Woolf?,” because it’s about two people tearing each other apart. We had a lot to pack in for these first three episodes, because the story spans about 20 years, as Brianna is born and grows up, and the marriage goes through all these different phases. We have hope with Brianna’s arrival, and then when that doesn’t bring a new beginning for them, we go through the rage, disappointment, hurt and anger and then settle into something more resigned.

What was it like filming the scene where Claire says goodbye over Frank’s dead body?

Balfe: First of all, during our very first take, I looked down and realized that sound had stuck a microphone to Tobias’ bare chest. That was not very emotional. Does the dead guy need a microphone? (Laughs)

Menzies: Those sound guys will mic anything!

Balfe: That whole relationship was so rich, and it was such a complicated story from the very beginning. It was heartbreaking and tragic, the demise of the Claire and Frank marriage. But that scene, I think for Claire, it was a tough one, because at that point they were so emotionally far apart from each other. The intimacy had been gone for some many years. You don’t realize how much you love somebody until they have been taken away from you. For Claire, they’ve been so used to living in this side-by-side world, but taking each other granted in a way. That moment is an apology.

And then in episode three, we see Frank die. What was it like to film those final scenes with that character?

It’s been a great journey on the show. There’s definitely some poignancy about finishing this job and these storylines. I feel like we had some good material to dig into—this falling apart of this marriage, and this sudden death by automobile accident.

It feels quite sudden, actually in the watching of it. We don’t see the accident. We shot a scene of when he leaves that final fight, we shot something where he’s walking out of the house, with a kind of tracking shot into his car, and him sort of sitting in the car momentarily. I imagined that would help the intrigue of what might have happened in the accident, but that didn’t make it into the cut. It felt very kind of jumped. He walks out and the next thing he’s on a slab. But, I think that’s probably also true to life. Death does come suddenly, and without warning.

TVLINE: Right before Frank dies, he asks Claire for a divorce — and she comes at him hard, and pretty vicious, even though she’d suggested it years before.

CAITRIONA BALFE: Obviously I understand why she does that, but if you look at it from the point of view of Frank, I mean, really, this is not Claire at her best. [Laughs] Frank has made these great overtures and really wants to put their life back together and again, you know, he’s willing to choose to forget about certain things that she said. But for Claire that’s just impossible. I think when you’re hurt and when you’re wounded and when you’re suppressing huge parts of your personality, then that festers and it comes out in ways that are not always honorable or kind to the people around you. Frank and, to a certain extent, Brianna really paid a price for Claire’s misery… If you scratch the surface, it’s all raw wounds, and when people are in that vulnerable place and that painful place, it’s like a wounded animal: If you go to try and touch it, it’ll lash out and it’ll snarl at you. Claire’s sort of in that place.

Yahoo!: ‘Outlander’ postmortem: Caitriona Balfe says episode 3 might be most ‘heartbreaking’ yet

“We didn’t want it to be a black–and-white situation where Frank loved Claire and Claire loved Jamie and was never going to get over losing him, the end — because it is more complicated than that,” Balfe says. “That would have been boring and it would not have represented their history. He was the center of her world before Jamie. Frank has been a good husband to her. He was a great father to Brianna. There is love and respect there. Also who wants to just sit in misery all the time? [There’s always a] desire to live a happy life. Tobias and I fought to have that in there, and we worked very hard to get the complexity of a compromised marriage right.”