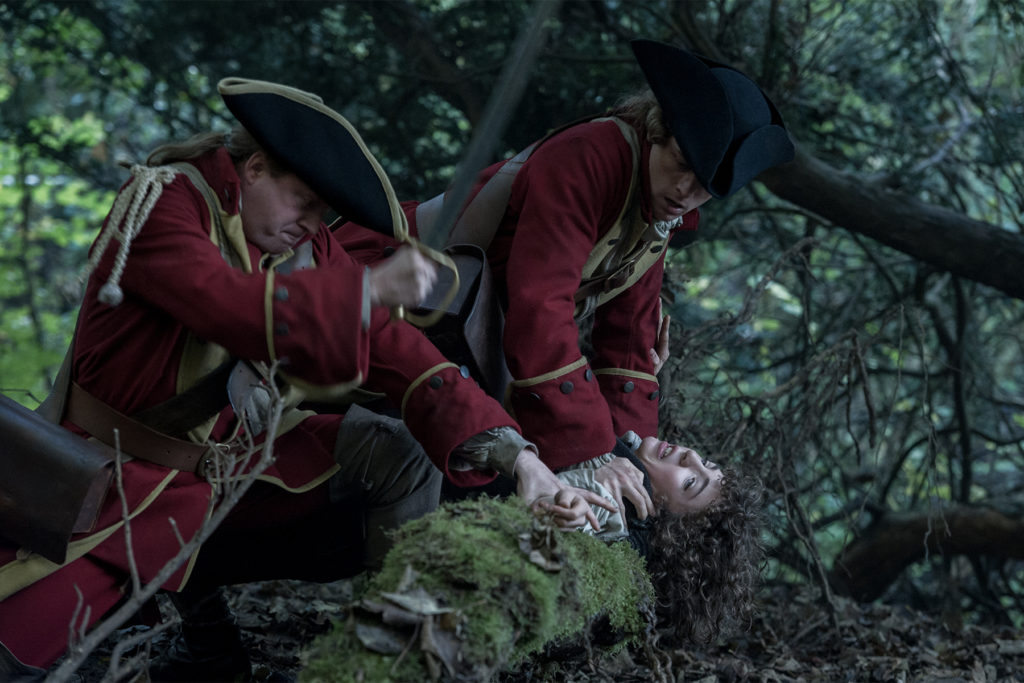 “Jamie, have you not seen the inside of enough prisons?”

“Little difference to the prison I’m living in now.”

Mark me, “Surrender” is the only title fitting for episode 302. The second installment of season three is jam-packed with pivotal moments from Voyager. And after viewing it, I was even more excited to cover this episode.

But before I get to my review, I want to make a quick note of Outlander composer Bear McCreary’s amazing interpretation of the opening theme and credits. Season one began with a rich and bright arrangement of “The Skye Boat Song” featuring McCreary’s wife and vocalist Raya Yarbrough. The choral background evoked an ethereal ethos befitting of the fairy hill dancers, before swelling into a chorus of bagpipes.

Season two’s opening foundation was similar but juxtaposed with the second verse sung in French and accompanied by accordion. A harmonica would occasionally weave its way through the Paris episodes, specifically when Master Raymond appeared. Again, adding to the overall aesthetic of the season.

In contrast to these bold tones, season three’s opening atmosphere is muted. It’s softer somehow, like a memory. I love McCreary’s subtle play on the Outlander theme this year as it perfectly represents (for me anyway) the warmth, nostalgia and occasional longing that comes with remembering a better time. Nicely done, Bear.  #Nailedit

By the Lords Justices,

Offering a reward to any person who shall seize and secure the infamous outlaw known in these parts as the Dunbonnet.

“Surrender” opens with the close-up of Jamie’s (Sam Heughan) mug shot. It’s 1752 in Scotland, and yet again, he’s on the lam. Like episode 301, 302 tick tocks like a metronome back and forth in time from Jamie to Claire. They’re living two separate lives thousands of miles and centuries apart. Both still struggle to come to terms with their new-found realities. In ways, they finally begin to make peace with their “new normal” and surrender to what is, attempting to let go of what was.

It’s been six years since Jamie and Claire said good-bye. At Lallybroch, Fergus (Romann Berrux) is running amuck with Rabbie McNab (Stuart Campell) and Young Jamie (Rhys Lambert). All three have grown. Berrux is taller and has a deeper voice. But his eyes sparkle just the same. I love him as Fergus.

Again like 301, after the opening credits no music accompanies the story until after a good seven minutes in, just around the time Jamie (AKA Red Jamie AKA The Dunbonnet) appears in the shadows of the forest. He is in hiding, living as a hermit in a cave near Lallybroch. His hair and beard are long and disheveled. He’s skinny. And he’s still haunted by Claire. Every time he returns home he seemed angst-ridden and riddled with anguish. Everyone seems to be moving on, leaving Culloden and the previous Scottish way of life behind. But Jamie is reluctant. He’s in the doldrums of grief and intent to live out his days in solitude, caring for his remaining family from a safe distance. It’s appropriate Jamie now has multiple aliases; he’s not the Jamie with whom we fell in love. Jenny points this out.

“In one stroke, I have become a man of leisure.”

While visiting his Master in his cave, Fergus also calls out Jamie, accusing him of cowardice. At that in-between age—not yet a man, but no longer a kid—Fergus is old enough to know he’s lost a piece of his friend.

Not long after, we get to one of what will be many crucial Voyager events. On the second visit to Jamie’s cave, Fergus realizes the Redcoats who have been harassing the Murray/Fraser household in search of The Dunbonnet, are following him. In his ever-so-clever Fergus way, he leads the goons astray. Upon realizing they’ve been traipsing in circles, the soldiers apprehend Fergus and slice off his left hand. I was honestly surprised by the graphic depiction of the incident, though in retrospect I don’t know why. One of the elements I love most about the show is that the “sax and violins” is rarely if ever gratuitous. There is always a reason, and it’s always done with the intent to push the narrative forward.

But the element of this ordeal that carries far more weight comes in its aftermath during Fergus’ recovery. He reminds Jamie of the pact they made years ago when he was first hired as Jamie’s pick-pocket: were he ever to get caught or injured doing “Millord’s” bidding, say lose a hand, for example, Jamie would take care of him financially for the rest of his life. This scene was my favorite of the episode. They’re backlit by firelight, Fergus makes slights about the whiskey, but you see how their relationship has developed. They speak man-to-man, but there is a bond now far deeper between them. The bond was there, growing in season two but now it’s forged. This bond also reaffirms Fergus’ respect for Jamie. Knowing what comes down the line for Fergus later in this season, I’m SO excited.

“Madam has been most generous with the whisky. Although you know that I prefer the taste of French wine.”

BOSTON, 1949. Claire is mothering. She dotes on Baby Bree but is bored. She and Frank (Tobias Menzies) appear to be on better terms from both parenting and intimacy perspective. I thought it was a nice touch on Director Getzinger’s part to include a clear shot Claire’s wedding band from Frank when she first initiates shenanigans lovemaking. For me, this was a clear effort on Claire’s part to reconnect and try. It doesn’t last.

Later, during a fireside moment of passion, again initiated by Claire, Frank pushes the limit insisting that she make eye contact. (Way to ruin the mood, Frank!) I was legitimately irritated here because I feel like Frank wants a transition to occur overnight. Claire was taking steps forward, but it wasn’t fast enough. Which then led me to the ultimate conclusion yet again, that Tobias is a chameleon. I can like him so much as Frank one moment and then be completely disheartened the next.

Their story ends with them saying goodnight and rolling over. In separate “Lucy and Ricky” style beds.

“A woman and a negro. How very modern of us.”

Joe!!!! One of my FAVORITE characters, Joe Abernathy (Wil Johnson), from Voyager, makes his debut in this episode! After three years of healing in the highlands, homemaker doesn’t quite suit Claire. So off to medical school, she goes, despite Frank’s objections. I appreciated that his apprehension was maintained from the book.  The only woman, Claire enters day one of class at odds with the general group dynamic, but she remains undeterred. As she settles into her spot, dead center of the room, her soon-to-be kindred spirit arrives, and they quickly become acquainted.

“How long’s it been since you’ve lain with a woman, Jamie?”

My final 302/Voyager highlight is the moment between Jamie and Mary McNabb (Emma Campbell-Jones) in his cave. Book readers remember how Jenny encourages Jamie to bond with another woman, not for love but the surface-level intimacy sometimes needed when wrestling with solitude and grief.  This moment was so tastefully done and stayed true to the book. As I remember it, she initiates. And Jamie, after much hesitation, surrenders. Fade to black.

True to its name, the episode comes to a close when Jamie, Jenny (Laura Donnelly), and Ian (Steven Cree) plot his “capture” (surrender) to the British. Jamie devises the plan to ease life on the residents of Lallybroch. It’s a heartbreaking end lined in silver. After all, this means we’ll be introduced to Lord John Grey soon.

Cut immediately to Claire walking to campus, stopping to tip a bag-pipe street performer. Highland heritage isn’t gone after all.

“In prison, Jamie discovers that an old foe has become the warden – and now has the power to make his life a living hell. Over the years, Claire and Frank both put their best foot forward to share a harmonious marriage, but an uninvited guest shatters this illusion, bringing their differences to light.”