British Heritage has an extensive article on the third season of Outlander that includes interviews with Sam Heughan, Caitriona Balfe, and executive producer/writer Matthew B. Roberts.  There are also new official photos from season three, plus a look at the locations used for this season.  Excerpts and photos are below, but head over to British Heritage to read the entire article.

BHT: Claire even appears in the aftermath— as a vision to a wounded Jamie as he lies among the dead.

Caitriona Balfe: That was a strange day. It was one of my first weeks going back, and the boys had all been filming these battle scenes. It was nighttime and freezing and those poor extras were just on these really thin mats.
One take—it was quite funny—I was walking through and someone had obviously fallen asleep and all I could hear was the loudest snoring coming from one of them. You’re trying to be all ethereal and make this moment as magical as possible, and then all you can hear is snoring. But it was really quite eerie to see all those bodies just strewn across a moor.

BHT: The Scotland of this season—the one Jamie lives in without Claire, which Claire eventually returns to—is not the same as the previous two seasons.
Balfe: Yes, in one scene, Claire looks at a place in Edinburgh and makes a comment that the last time they were there, they were with all the generals and Bonnie Prince Charlie. When she comes back, it’s a depressed people and their culture has been stripped from them in many ways. We see this through Jamie and his cohorts—good men who had been soldiers or who had been landowners are now relegated to the black market and to existing on the fringes of society.

Roberts: We wanted to stay true to the fact that the Clearances took place after Culloden, and they banned bagpipes, they banned tartans, they banned kilts—essentially banning the Scottish way of life. Scratch that, not the Scottish way of life, the Highland way of life. Because what we kept running into in the history is that many Scots fought on both sides. There were many lowland Scots fighting for what you would essentially call the British on the battlefield. It wasn’t really necessarily Scottish versus English. It was a fight between two monarchs. “Our monarch is better than your monarch!” The Jacobites wanted to install the Stuarts as the rightful Kings, and the Hanovers wanted to keep their throne.
In Season Three, no Scot wears a kilt. We don’t do bagpipes. There are no tartans. We take away all the weapons, because it was also a crime for a Highlander to have weapons—guns or pistols or muskets. We play that. It’s part of the story going forward, and then the Clearances, and how difficult it all was.

BHT: In her time, the 1960s, Claire has become a pioneering surgeon, yet she still chooses to go back to the mid-1700s.
Balfe: No matter what time Claire’s in, she’s a woman who breaks through glass ceilings. But I’ve always felt that she’s most her vibrant self when she’s back in the 1700s. So it’s interesting to watch this formidable woman plow her way through medical school [in the 1950s]and buck against the patriarchy and then make a decision to go back to a time we would probably think is much more patriarchal. And yet she finds herself in a much more comfortable position, in some ways, back then.

BHT: That’s touched on this season when Jacobite prisoners are sent out to the New World.
Roberts: The transportation we play—Highland Scots were transported as indentured servants to different colonies to help open up the colonies. The English, or the British, found that they were such fierce fighters that they could go and live off the land, and they didn’t complain. To put them in harsh environments was perfect for them. They didn’t want to go to prison or be labeled as traitors, so in a way it was a great compromise. You go open up these new worlds instead. We used that history. That’s when it really works, when you find history that works perfectly for your story.
Heughan: It’s just so amazing how far-reaching the Scottish culture has gone—and how much this small part of the world has affected the rest.

“We see a lot of Craigmillar as Ardsmuir Prison, where Jamie is [held]. I grew up quite near there,” Heughan says. “There are lots of modern buildings around, and then, right in the center, is this castle. When you go up, you can see over the Firth of Forth, which is the water between Edinburgh and Fife, the north of Scotland.”
“In that picture, the British soldiers are transporting prisoners to different British colonies around the world,” Roberts reveals. “The timing of it might not be dead-on, but there was a prison where they did this, so we kind of commingled fiction and fact.” 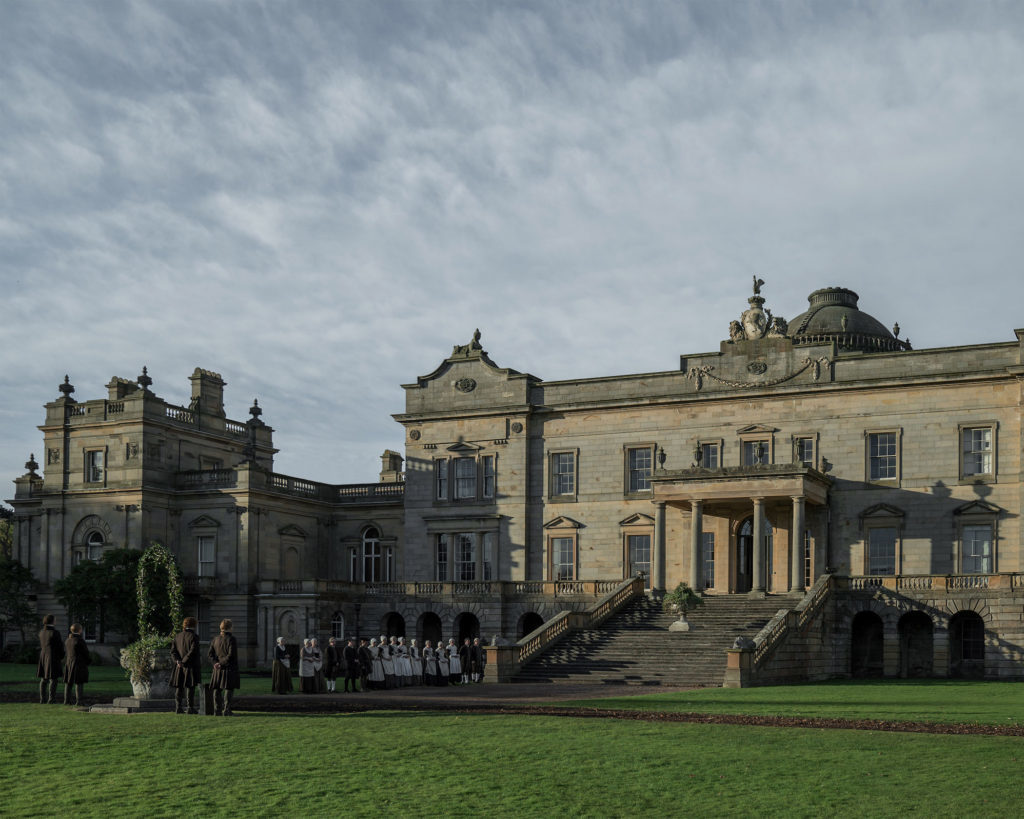 “Gosford House is Helwater, where Jamie is a groomsman. Without giving away too much, he finds something else there to live for,” Heughan says. “They had the stables already in the estate, but we added to that and built a whole street with cobblers and tradesmen. They have a lot of fine art there as well—incredible artwork!” 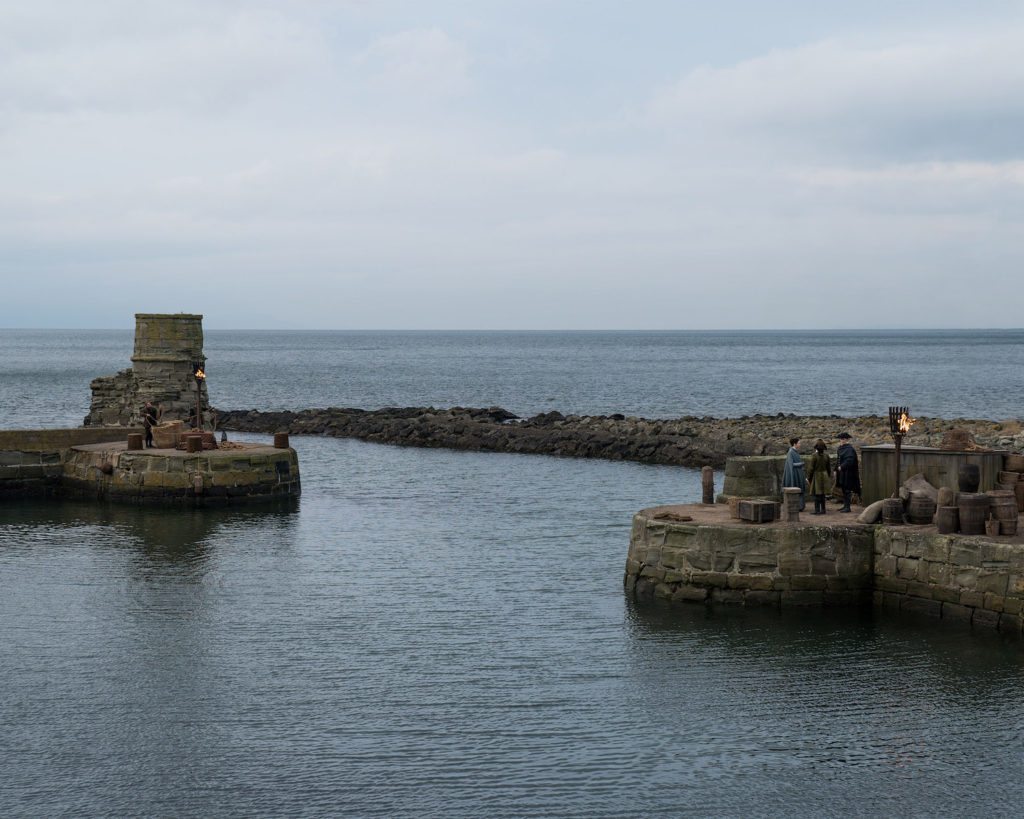 Denure Harbor: “It’s one of those charming little old fishing harbors in West Scotland. [Outlander set designer] Jon Gary Steele did an incredible job building up the set around the natural harbor that was already there,” Balfe says. “It’s magical,” Heughan agrees.