At International Animal Rescue we do exactly what our name says – we save animals from suffering around the world.

Right now their urgent mission is to purchase 64 acres by their Orangutan Rescue and Rehabilitation Center. Set up as “Protect A Patch” in their  Urgent Forest Fund this fund would help the organization be able to expand their center and care for more orangutans. They are currently bursting at the seams with the number of animals they are assisting and if the land can be acquired they can expand their facilities by 20%. Patches of land can be purchased for $20 and protect 20 sq meters.  If you prefer something more tangible and still would like to support International Animal Rescue they have a shop as well as an adopt an animal option. With the adopt an animal option there are biographies on each of the available animals and each adoption allows you access to photos, videos, and regular updates on your chosen animal.

If you are interested in the most recent activities of International Animal Rescue they have a great latest news section. They really keep anyone interested well updated on what projects they are carrying out as well as the results and their animal releases.  Steven Cree was kind enough to sit down and discuss why he chose International Animal Rescue, and why you may want to rethink that jar of Nutella in your grocery cart. 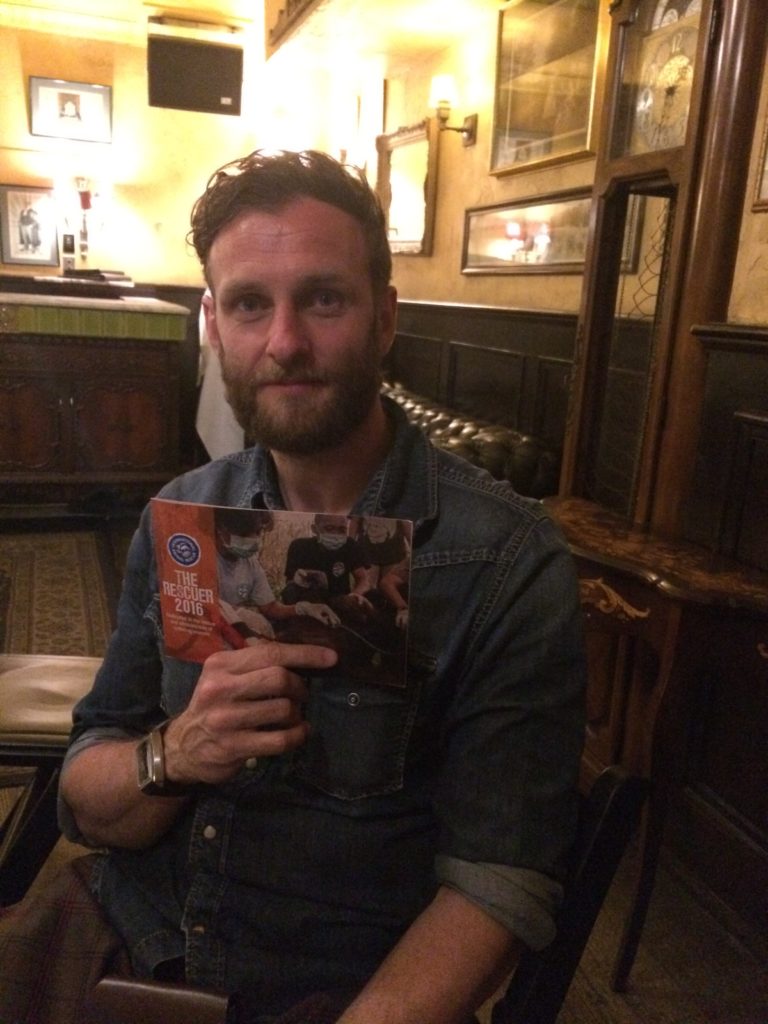 S: I chose it because, partly because my wife actually donates to them, she has donated to the charity for several years now. So when I joined Twitter last year I followed International Animal Rescue and started finding out more about them and the work that they do all over the world which is incredible. You know, helping animals all over the place. Particularly their help of the plight of the orangutan has been something I have taken a lot of interest in and care about. So when I was asked which charity I would like to affiliate tonight with I just think it is such a great cause, they do such a great job, and it would be great to raise more awareness of them. In fact through tweeting for them, they asked me to tweet a photo of me wearing a tee-shirt of their company, which actually I understand gathered a lot of interest and a lot of people bought the tee-shirt so it is amazing being able to…I wouldn’t say I helped, but it is amazing being able to raise awareness in some small way.

OLTVN: So you were able to raise awareness with wearing one of their tee shirts, they have where you can adopt an animal. You can adopt an orangutan, sloth bear, slow loris, or a cat.

S: Which would I adopt?

OLTVN: Which would you adopt?

S: I would adopt an orangutan, yeah. I think, I would happily adopt the rest of the animals as well but I think it is just, I don’t know if the sloth bear is on the endangered species list or not, but obviously the orangutan is incredibly endangered now and there is a very real possibility that maybe by the year 2030 or so there is not going to be any left in the wild and I just think it’s, you know, along with every other animal that is on the endangered list it’s an utter… I can’t always comprehend the idea that tigers and orangutans won’t be roaming wild anymore because you know of man destroying the habitat that they live in. So, for that reason actually I don’t eat Nutella anymore as well because Nutella has palm oil in it. I tweeted something one time about how much I like Nutella and people are always buying me Nutella, but actually, I don’t actually eat it anymore because palm oil is one of the reasons the forest the orangutans live in are being destroyed.

OLTVN: One final question that is an ‘Outlander’ question that we see comes up a lot. With Ian not having a leg, and you having to use a prosthetic all the time, how was that for you physically?

S: Yeah, (laugh) Yeah, The first season of ‘Outlander’ I had to go to physio every week. Actually more because my back was so painful because there was compensating on the left side of my back I guess. I had pain all the way down it, so probably let’s see I don’t know how long I filmed the first season, maybe 9 weeks, I was at physio almost all the time so actually it wasn’t quite so much my leg it was more my back. But it got better and actually when I went back for Season 3 it was okay, I think I had worked out how to use it better, and also in between takes and in between scenes I can take my leg off and put it down, so it could be worse.

Thanks to Steven for sitting with us at the end of a long evening. If you missed out on the June ‘Outlander’ in the City charity dinner there will be another chance in September 30th as the organizers have announced an evening with Caitriona Balfe and Sam Heughan.

Ladies and gentlemen we have another event! Meet Sam and Cait in NYC! September 30th! Tickets are on sale now! https://t.co/708TPBo85Y pic.twitter.com/1Ln4TRreBZ