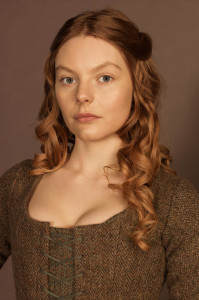 From Outlander on Starz to Victoria on PBS’ Master Piece Theatre, Nell Hudson is a busy woman. Fans love to hate her as Laoghaire MacKenzie, the young maiden smitten with Jamie (Sam Heughan), in spite of his undying love for Claire (Caitirona Balfe).

In her recent interview with TheCelebrityCafe.com, Hudson discusses auditioning for Outlander, what’s to come of Laoghaire, and making out with The King of Men (among other things).

TCC:  Now how did you learn about the role of Laoghaire MacKenzie for Outlander?

NH:  Well, I got sent the audition by my agent, and I hadn’t actually heard of the book until then, but then after a very quick Google search, I saw what a huge phenomenon the books are [laughter], and, yeah, and then off the self-tape?, and then I got recalled for that, and, in the recall, I met Sam Heughan, obviously, he plays Jamie, and loved him straight away [laughter], and the producers of the show, and, yeah, and I think they let me know the very next day that I’d got the part. So I immediately went out and bought the book and read the book, and completely loved it, and saw what all the fuss was about [laughter].

TCC:  Now, how did you celebrate getting the part [laughter]?

NH:  I’m sure that there was champagne involved [laughter], and I remember it was mid-summer. It was August so probably, yeah, I think probably sort of al fresco champagne or something [laughter]. I can’t remember. It was so long ago now.

TCC:  Now, have you read all of Diana Gabaldon’s books now?

NH:  No, I’ve only read the first three because Laoghaire leaves after that so [laughter] I dropped off the radar. But I should and I probably will at some point. I’ve got a huge stack of books on my bedside table that I’ve been given that I need to get through.

TCC:  Now, what do you like best about Laoghaire?

NH:  What do I like best about Laoghaire? I mean, in the first book, she was so lovely to play.  I was so very much on her side and it was really easy to be on her side and see how her own version of the narrative was completely plausible to her and yet her motives for doing the terrible things that she does were very real to me and seemed quite legitimate, to be honest [laughter]. I mean maybe not attempted murder. Both sides of her were really rounded in the first book and then, obviously, later on, she goes through certain things in her life. She goes through strife. So she’s always got the dark side but she’s also so a well-rounded human character who I could find the kind of reason for the way he behaved. I mean, also, it’s really fun to play the bad [laughter]. It’s fun to play a character that people love to hate.

TCC:  Well, I always imagined that Laoghaire got a serious talking to from Mrs. Fitz after some of her antics.

NH:  Yes. Of course. Definitely [laughter]. Definitely. Very funny. I actually just ended up wearing Mrs. Fitz’s wig for season three because, obviously, I have to be aged up a bit. They still had Annette Bening– not Annette Bening [laughter]. Annette Badland’s wig from season one who played Mrs. Fitz, and they put me in her wig, so I really became my grandma [laughter].

NH:  I’ve got one ready to publish for when the series comes out, but I’m not allowed to share it yet.

TCC:  Okay [laughter]. Now, if Claire never existed, do you think Laoghaire and Jamie would have ended up together?

NH:  I think so. Yeah. I mean, I would say that, I guess [laughter]. I think so. I think that Jamie’s still has a tenderness for her, and I think Jamie’s definitely a hero to her and I know it’s through sort of not the right reasons, but they do end up together when it seems she [Claire] kind of has fallen off the radar. I think so, yeah.

TCC:  Now, you were only in one episode last season, but in the book she actually wasn’t in the second book, so–

NH:  Yeah, it was a really lovely decision–

TCC:  What do you think was achieved at the end of Fox’s Lair?

NH:  I think it was just really great for the audience to be reminded of Laoghaire, because obviously she does come back in the third book, and I think that it just sort of imprinted her in everyone’s memories for that future eventuality, and I think [laughter] we got both sides of Laoghaire again. I think she was really repentant at the beginning of that episode…[laughter]…and did want to have forgiveness and, I think, managed to sort of convince herself of her own life that she was kind of tired and had reunited with Claire. It was God’s will that she should reunite with Claire and get her forgiveness, but then I think by the end [laughter] of it…we see that Laoghaire’s love for Jamie is a fire that just won’t go out, and it kind of leaves it hanging quite nicely.

TCC:  Now do you have a favorite episode?

NH:  Of all the episodes we ever did? Or of all the ones ever to watch [laughter]?

TCC:  I’d love to know what happens in the future, but I don’t think you will be able to tell me.

NH:  No, I can’t. Obviously getting to make out with Sam Heughan was fun [laughter] in series one [laughter]. But, no, I mean, there’s a lot of good ones. I think the climax of the first season is so excellent with the sort of magic of Geillis and Claire together. I always loved that. I thought that was such a brilliant story.

TCC:  Now how do you get the Scottish accent right?

NH:  It’s funny, there’s just certain accents that you can and can’t do. And the Scottish accent was one that came quite naturally to me, which is weird because I have no one in my life who’s Scottish. But we have an amazing vocal coach on Outlander, Carol Anne, who’s really excellent to work with and super helpful. And it’s so easy now. There’s so many recordings online of the exact accent you’re going for. But I think Scottish is just one, hopefully, that comes quite naturally.

TCC:  Now can you give us a couple teasers? What can we expect from Laoghaire this season?

NH:  In season three she’s older, she’s been through a lot. She’s got her two daughters, obviously. And she’s sort of, I think, emboldened with age [laughter].

TCC:  Now, are you allowed to give a hint as to when the release date is? [We have since learned that we need to wait until September for Season 3 of Outlander.]

TCC: Bummer.  My editor and I are big fans of the show so we’re excited to see it.

TCC:  Now, one final Outlander question, what do you like best about working on Outlander?

NH:  I think– I don’t know, it’s such a good story. It encompasses so much with the historical element and learning about that time was so interesting and the romance and the time travel. There’s a wealth of things going on in the story, in the books, that I enjoyed so much. But, obviously, with any job the main thing that makes the job is the people and the people were absolutely lovely. Everyone that I worked with was fantastic.

TCC:  When you guys got the SAG award, the thank yous were very nice.

NH:  It’s so excellent. I’m so pleased. Everyone is lovely.

TCC:  Now, do both Outlander and Victoria tape at the same time?

NH:  Yes. Sorry [laughter]. They did. It was tight filming the second series of Outlander during the filming of the first season of Victoria. So that was all very rushed. And then the third season of Outlander was fine. I had space around that one, but in the second season, that was all happening at the same time, and it was weird going very quickly, from one to the other. I think I had one day off between two characters.

NH:  With Laoghaire, I know her very well. It’s quite easy to slip in [laughter].