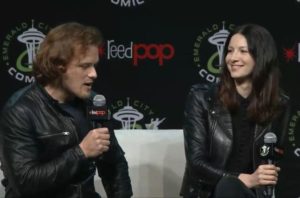 The Emerald City Comic Con is over. Today, I look back at my jam packed weekend with the contented lethargy often experienced after having gorged oneself on Thanksgiving Day. Only my gluttonous fixation was on something other than turkey …

The Outlander Panel featuring Sam Heughan (Jamie Fraser) and Caitriona Balfe (Claire Fraser) was set to start at 11. I got there at 9:30 and the line was already outside. While waiting and conversing with local Seattle fans and a few from Dallas, we played a round of “How Well do You Know Outlander” to pass the time.

We finally funneled into the auditorium and the show began. Caitriona came out first, radiant as always. And then Sam swaggered on stage donning one hell of a kilt. It’s astonishing how tall the man is in real life. After a brief opening discussion, the moderator–Clare Kramer from Buffy the Vampire Slayer by the way–called for audience questions. This was my chance! I bolted into the line forming on the right as it was significantly shorter than the queue forming on the left. I remember thinking “eight ladies in front of me, times two if you count the same number on the other side. Great! This is going to happen!” I made sure to type my question into the notes function of my phone so as to sound somewhat composed in spite of my inner fan girl who was ravenously clawing her way to the linguistics control center of my brain and turning it to mush.

Eight ladies quickly became four, then three and eventually the only thing standing between me and my mind-alteringly deep question to Sam and Cait, was one. other. fan. She asked her question.

I have no recollection of what it was. Because immediately after they responded, I heard this “All right you guys, this time it’s for real…” No more questions. NOOOOOOOOOOOOOOOOOOOOO!!!!!!! I even tried pulling the old “yeah but I’m with the press! See my press badge?!” No go.

So for your pleasure, here is the panel in full. That’s my hand in the shot at the 57.41 mark. (And I was able to get an autograph and a wink from our King of Men but that’s a different story for another post.) Enjoy!