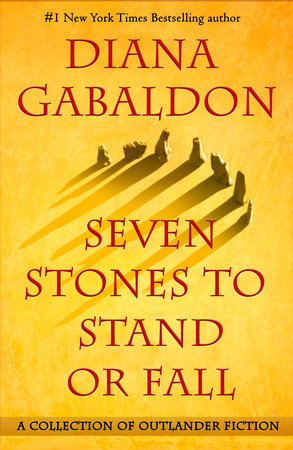 Diana Gabaldon announced this morning that the next Outlander novel coming from her will actually be a collection of novellas, seven to be exact.  Entitled Seven Stones to Stand or Fall, it will be released June 27, 2017.  You may have already read some of the novellas included in this collection.  Diana detailed the release this morning from her Facebook Page:

Yes, you read that correctly.  There is no ninth Outlander novel in 2017, so this will be your Droughtlander cure for that medium.

Karen Henry of Outlandish Observations was kind enough to share Diana’s response to the question about the book’s title meaning.

I wanted a title that at least suggested that there were a number of elements in this book (hence the “Seven”) and “Seven Stones” just came naturally, and was nice, (“stone” is always a weighty word <g>) but not a complete poetic thought (or rhythm).

[The] “stand or fall” has to do with people’s response to grief and adversity:  to wit, if you aren’t killed outright by whatever happened, you have a choice in how the rest of your life is lived–you keep standing, though battered and worn by time and elements, still a buttress and a signpost….or you fall and return quietly to the earth from which you sprang, your elements giving succor to those who come after you.