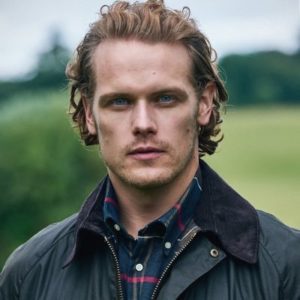 Sam spoke recently with Harpers Bazaar about his new role as the Barbour Brand Ambassador and returning to his alter ego Jamie, in Outlander’s third season, Voyager.

From literally wearing his Scottish heritage on his sleeve to Caitriona Balf’s (Claire) bum rolls and unique bathroom situation, it’s a fun interview. He also takes fan questions at the end.

Sam discloses they’ll be shooting part of season three in South Africa, which happens to be the set location for another Starz hit, Black Sails. Perhaps they’ll make use of the pirate ship…

DISCLAIMER: The audio breaks up a bit in the beginning but settles in at the 1.13 mark.

{Added by Sarah} At the end, Sam says they are shooting for 11 months, ending in May 2017 . . . in South Africa.  So about that early premiere date fans are hoping for, it doesn’t look like it is going to happen . . . unless they split the season like the first.