**The excerpts below have been edited for spoilers. The actual Parade story does contain spoilers pertaining to tonight’s episode.** 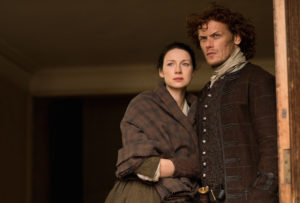 Sam: The Scots fought naked, or at least dropped their kilts. You will have to watch the episode to see if we do that or not.”

Can you talk about what a changed man Jamie is in these last four episodes. He’s back in Scotland, back in his kilts and finding his niche.

Sam: Absolutely. At the start of Season 2, he was half the man he formerly was. He still had a lot to deal with psychology-wise. Then Randall kind of frees him. The fact that Randall is still alive is such a relief to Jamie and he can take control of his destiny, which he does. Of course, it causes problems between him and Claire, but ultimately, by the time they get to these last few episodes, Jamie’s released and finding his feet again, and turning into the man who he is supposed to be, which is as a leader of men. He is a natural clan chief. He is a natural leader and it was a real payoff to play those episodes.

In these final four episodes, you are out on the battlefield, will there still be intimacy between Claire and Jamie?

Caitriona: …We have always said if there is sex, if there is violence, it is there for a reason, it tells you something about where they are. There is a war looming. They are on the road, it would feel trite to put in a non-essential scene.

I think as we saw in episode 8, Scotland is a very healing place for them, and their bond is set now.  They are a team and they are fighting together and they are trying to change history, I believe that intimacy is there. Paris was a very poisonous place for them. Now that they’re back in Scotland, they’ve put that behind them. [More…]

Sam: He is a forward thinking man. If Claire were there, he would learn to adapt, but I think it would be quite a stiff learning curve. He would have no patience for many things, but he would probably like airplanes, I imagine.

You have a 90-minute episode coming up for the finale. What can you share?

Sam: In the finale, you will have to tune in to find out, but from episode 10 on down, we really are coming down to zero hour. It is all about this point in time, which is the Battle of Culloden and whether we can stop it or not. That is what is going to happen between then and now.

Most episodes we shoot far more material than we need. Each one could be feature-length. We do shoot for a long time. We probably shot 10 or 11 months this year, and we do press, so the show is all-encompassing. Now  the pickup for seasons three and four are going to take us another couple of years.