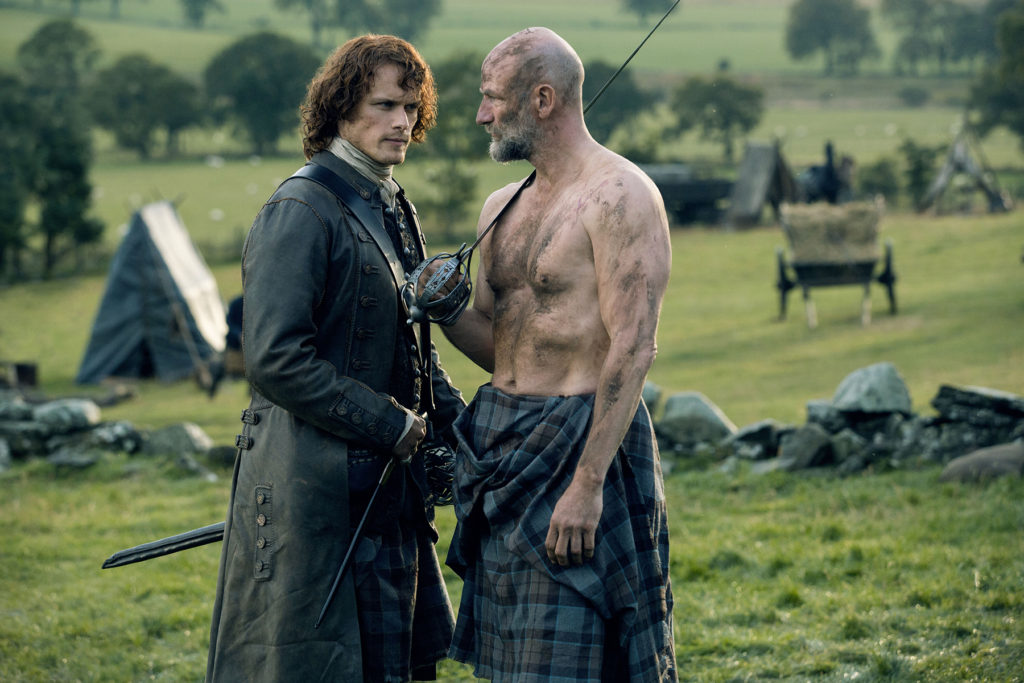 Although most of the men preparing to fight had connections to Jamie, it wasn’t a sort of Highland hierarchy that was behind Dougal’s decision to follow Jamie’s orders and not push things more than he did, despite his hopes for a higher position in leadership.

“I don’t think it’s so much it’s about the rules of the Highlands, it’s more a practicality on Dougal’s part,” Graham told Access Hollywood. “His goal is to ensure a successful rebellion against the British and if that means just sucking it up a little bit and being deferential to Jamie for the time being, then he’s absolutely prepared to do that because the overarching goal is to achieve… not just Scottish independence, but the bringing back of the rightful king to the throne. So, that’s what’s motivating him. I don’t think he likes it. I definitely don’t think that he believes that Jamie’s particularly up for the job, but he’s prepared to put up with it.”

Filming Dougal’s rebuttal, where he admitted to wanting glory, but declared his love of Scotland above all else, including his own life, was a speech Graham enjoyed sinking his teeth into as an actor.
“That scene was definitely one that stands out for me,” Graham said.

“What I hope comes across in that scene is you know, he’s not stupid. He knows who he is; he knows what she’s saying, of course. He’s self-aware, but at the same time, he doesn’t want her to get away with thinking that he’s just that, that there is a lot more to me than that vanity and manipulation and all of the negative qualities that you could certainly pin on Dougal’s character, and he wants to make it clear to her that, ‘Yeah, you can have a go at me and you can tell me that I’m vain and I’m totally willing to accept it, but don’t for a minute think that I wouldn’t give my life for my country.’ And I think that really tells the audience hopefully who Dougal is and it’s something that I really wanted to get across,” Graham continued. “Because the danger is he could be seen as just a villain, and he’s very much not in my view a villain.”

THR: In this week’s episode, it was interesting to see how you integrated Claire’s memories of World War II with the training of the Jacobite army, and how it brought up feelings of PTSD for her. What did you want to convey with those scenes?

Matt Roberts: In the book, this section for Claire is very internal. She’s thinking a lot. And she had the backstory of being a WWII nurse which we saw in the very first episode of Outlander. As we were breaking this episode, we thought that it wouldn’t be going off book so to speak if we were just to tell part of that story, when in fact we know this all happened. These lines of dialogue are in the books, just from different parts. I wanted to incorporate all these little exchanges and moments from all the different books into a script somehow, and so I did it with these flashbacks.

THR: At the end of the episode, Jamie’s army finally joined up with the Prince Charles’ (Andrew Gower) army. Where does next week’s episode pick up?

Matt Roberts: Next episode is titled, “Prestonpans.” The episode encompasses the Battle of Prestonpans. We’re going to take Jamie and his troops and integrate them within the bigger Highland army. Prince Charlie returns and the first half is all these people trying to jockey for a position with him. Jamie is the one person who doesn’t have to since he already has the Prince’s ear. And through knowledge of Claire, he knows they’re going to win this battle, so he’s a little more relaxed than you would normally see a person going into a battle. So what we need to show in “Prestonpans” is how they win this battle. We stay true to the actual battle, it was about eight minutes long total and we pretty much almost show it in real time.

THR: This episode showed how Dougal (Graham McTavish) and Jamie disagree on how to best lead the army. How is their power struggle going to escalate moving forward?

Matt Roberts: Oddly enough, Dougal has to take a more subservient path in order to fight. It’s only going to be later in the season when one of our characters passes that he’ll be able to take full reign of the MacKenzies again. Over the next few episodes, Dougal has to really take an unfamiliar position because being subservient to Jamie is really new to him. He’s always been half in charge, which was tough for him anyway with Colum. He’s just a mere soldier now, and that’s the thing that really eats at him.

Vulture: Why Outlander’s Claire Suffers From PTSD on the Show, But Not in the Books

“I was always curious about what happened to her in the war,” show writer Matthew Roberts explained. “Claire’s WWII story is kind of sprinkled in the books, but there’s not a lot of detail about it.”

Because Claire’s story, as told in the books, is very internal, Roberts tried to think of a way to visualize this aspect without a lot of voiceover. It seemed to fit with the episode where the soldiers are in training, so he pitched the idea of Claire suffering from PTSD — the writers’ room, as well as actress Caitriona Balfe, loved it. “I thought it was great, because everything that she’s gone through in Paris, she’s a more fragile woman than we’ve seen her before,” Balfe said. “Yes, there’s been a lot of healing, but her armor has definitely been dented.” (Plus the idea meant that Balfe could wear trousers again, “always a relief!”)

Roberts and Balfe started researching PTSD, visiting online forums, talking to soldiers, and watching documentaries. But one of the things that informed the script most was Roberts’s past work as an EMT in Los Angeles. Before he was a writer, he learned how hard it could be if you got a call to treat someone you know and love. “It’s not easy to disconnect,” he said, “but it’s easier to disconnect when it’s not someone you love. They aren’t just soldiers coming off a battlefield that she never met before, where her training can just take over. It’s Jamie, and it’s Angus, and it’s Rupert. It’s not a wound anymore. It’s a whole person.”

For her part, author Diana Gabaldon welcomed the addition to the story. “Claire knows exactly how horrible war is, and thus may have a better knowledge of what they’re facing than do any of the men with her,” she said. “Seeing its lasting effects on her, we understand her desperation to stop what’s coming.”