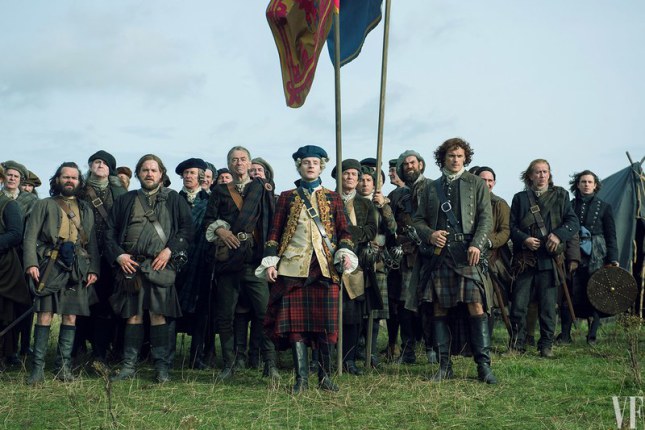 In an interview with E! Online, Sam Heughan, Caitriona Balfe, and Maril Davis preview Outlander episode 210, “Prestonpans.” They also talk about the looming Culloden battle that awaits them after this episode.  Below are excerpts, but head over to E! Online to read it in its entirety.

“The pressure cooker is on!” Caitriona Balfe tells E! News. “The action really ramps up, and time is really pushing on Claire and Jamie, and on everyone. It gets really active and really intense, but yeah, we know that it doesn’t all end very well, so it’s got that doom sort of looming over it as well.”

“Prestonpans is a big momentous point, a big turn, in fate for the highlanders,” Sam Heughan agrees, “so it’s not going to be an easy ride.”

“She’s been through that before, she knows what’s ahead of them, she knows the horror that they’re about to walk into,” Balfe continues. “It weighs on her, and it weighs on her deeply. In some ways, Jamie has blossomed into the man he’s always supposed to be, and Claire is resigning herself in some ways to be the woman that she is. They’re in different places, but yet I think she does become a good partner to him, and they are sort of there side by side in many ways as well.”