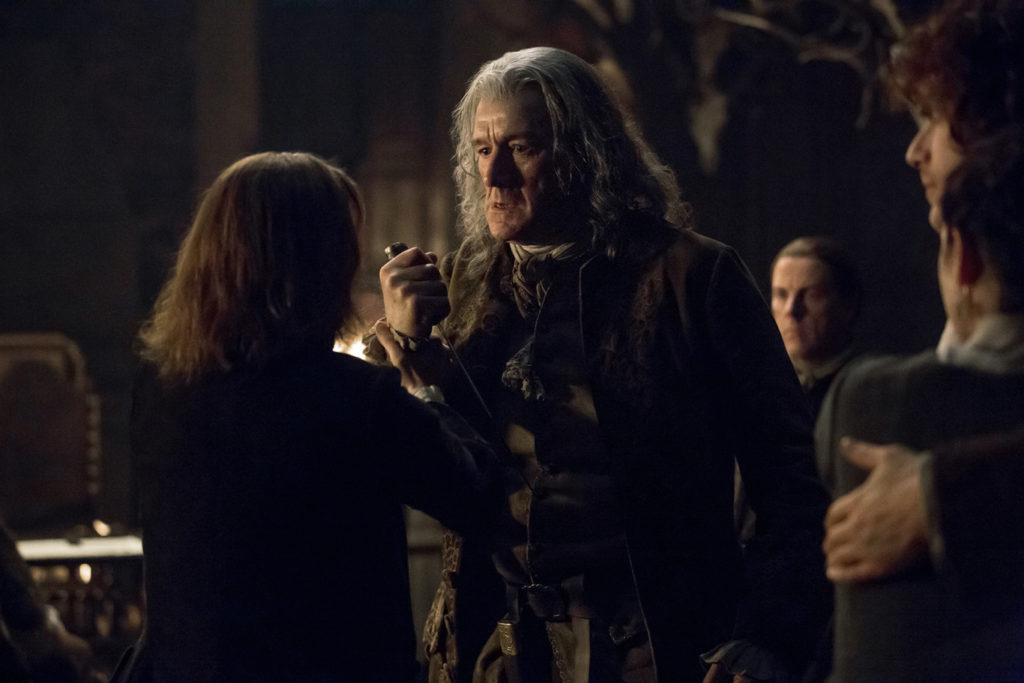 This week’s post-episode round-up includes two new interviews with executive producer Ron Moore and Clive Russell (Lord Lovat). As always, read with caution as the interviews do contain spoilers for the show.

THR: There’s been a lot of controversy from viewers over how much of Black Jack Randall’s (Tobias Menzies) rape of Fergus (Romann Berrux) was shown onscreen vs. how much of it was in the book. Why did you choose to show more of it in the episode?

Ron Moore: It’s been a while since I’ve read that chapter of the book but my recollection was the book was fairly explicit about what happened. I thought that what we showed in the show was actually the minimum required to convey the horror of what had happened and to understand from Claire’s point of view why she would change her mind about Jamie and about getting him out of the Bastille and come to an understanding about what made him break his promise to her and to really viscerally put her and the viewer in the point of realizing what had happened to Fergus. We had a lot of conversations about it with the cast and the director and then in editorial, and I went with what I thought was enough to convey the horror of it without lingering in it and making it too gratuitous.

Has the fan response to that scene surprised you at all?

I don’t spend a lot of time seeking that out, but from what I’ve seen, the overwhelming response has been positive. Everyone thought the show was very emotional and that it was a very gut-wrenching episode and the performances were amazing. I’ve seen pretty much a very positive response.

IGN: What was key for you to get into the mind of Simon Fraser?

Clive Russell: I think probably his attitude to women, particularly to [Caitriona Balfe’s] character , to get on that foot of a man who’s just looking at women in a certain way. Certainly the history of the real character, he was a pretty horrible and brutal man. A reflection of his times, maybe, but very brutal with women. That was the key to the relationship with his grandson, anyway; his mistrust of this Sassenach woman who was getting above herself, as it were.

IGN: What’s interesting is that even as he is a pretty terrible person, as you said, there is this certain charm and charisma to him.

Russell: He was a very extraordinary man. All his jumping about from one side to the other, of support of the English to the Scottish causes, was a result of a pretty smart brain, and a man who was able to convince people, “I’m on your side,” and the next day he would be on somebody else’s side. His charm was a great part of it. I don’t think we saw a lot of that in these particular episodes, but certainly the real guy had all of that. You’ve got a considerable man: extraordinarily flawed, brutal, ruthless, but that’s a good observation. He did have charm.