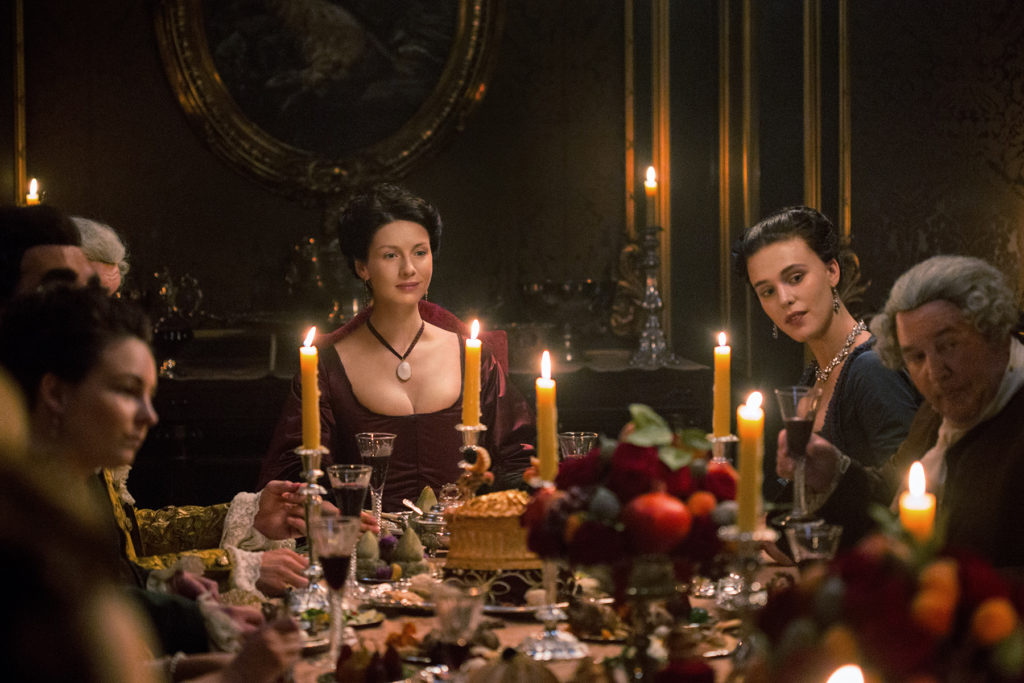 To Claire’s (and frankly, everyone’s) shock, Jamie was actually ecstatically happy to learn that Black Jack was still alive. Why did he react that way?

Sam Heughan: I wanted to play Jamie as sort of a shadow of himself for the first few episodes. He’s not himself. He’s being someone else. He hasn’t dealt with this trauma and his post-traumatic stress. He’s not quite himself and the thing that cures him or releases him is the knowledge that Randall is alive and there, we see Jamie again. It’s like finally he’s been released from Randall’s nightmare. His cure comes from a very strange place, from Randall himself. But I guess it’s like that with any sort of trauma or accident you have or any fears you have — you have to face that to get over it and move forward. The only way he’s cured is with Black Jack himself. The fact that Black Jack is still alive gives Jamie hope again. That gives him the power to once again take control of his destiny and of his life. That finally rids him of the nightmare that is Black Jack Randall. It’s strange that the salvation of Jamie comes in the form of the very thing that injured him. It leads to some really dramatic stuff later on this season.

The attack on Claire and more specifically on Mary was so brutal. How will that affect Claire moving forward, especially now that she knows her life is in danger in France after her poisoning in the beginning of the episode?

Caitriona Balfe: For Claire, it’s an awareness of what the dangers are in Paris. But it also makes her more determined than ever to find out who’s responsible and to succeed at their goals so they can get out of Paris and go back home. Paris, they thought it was going to be a fresh start in a new place with a new life, but it’s just been the opposite of that. It’s been tough on their marriage, it’s been tough on them individually, and now it’s also not a safe place to be physically. It’s pushed them to be more determined to succeed.

We learned pretty early on this season that Black Jack actually survived his injuries at Wentworth, although Jamie only just learned it in this episode. How have those injuries affected Black Jack, especially since he knows that Claire and Jamie caused them?

Tobias Menzies: We are going to meet a slightly less confident Jack in the second season. That’s partly due to the injuries that he incurred, but I also imagine there were probably some disciplinary fallout from the events of Wentworth for him. He’s not the same person anymore. It’s a nice reveal when he finally does turn up, and it’s in a very surprising place, but I can’t say when and where and how that happens.

“Sam and I, we kind of fought to keep the belly,” Balfe says. “I think originally they were just a little bit like, ‘Maybe nobody wants to see that.’ But—especially because their intimacy has been so disrupted—it was so important to us to show that this is their safe place. Diana had written me the most beautiful email about pregnancy. She was so honest and so articulately beautiful about the process. The good things and the bad things. We talked about how sexual pregnant women feel and how that can be such a strong feeling, and to relegate that and to not use it I thought would have been a real disservice to the journey of this couple.”

Outlander, ever mindful of the female perspective, allows Claire to express her own frustration at being sexually disconnected from her husband. Even as Jamie rightfully gets the bulk of the dialogue to process his trauma, Claire asks him to consider her feelings of isolation. Yes, the sex between Claire and Jamie is the steamy stuff of prestige cable drama—belly and all—but it also feels weightier. “We’ve always been so adamant in the show that if we’re going to show sex, and if it’s going to be part of the show, then it has to be an integral part to the storyline,” Balfe explains. “And it has to tell you something about where this couple are at.”

Let’s talk about what this rape means for Mary, in this time and place.

She’s a soiled woman. Soiled goods. You’re just done, even though it’s absolutely not the woman’s fault in any way, shape, or form. Awful. I mean, still, in today’s society, there are countries where they think that. In the Middle East, you actually get punished for being raped. One woman was sentenced to 400 lashes. How can you justify that?

And for Mary, this could jeopardize her arranged marriage. “If she’s been violated, her reputation will be ruined,” Jamie points out. “She’ll be a spinster until the end of her days.” Although even the fact that her marriage was arranged …

It’s terrible how that happened, and it’s good that they’re highlighting it and showing it. I don’t think Claire can get her head around this at first, at how awful this is, and how young Mary is. I mean, she’s like 15! This is the age where they were sold off and sentenced to the life of marriage and just having to have lots of children to provide an heir, which is awful when you think about it. Appalling. But historically accurate. A lot of people are ignorant of these things because you’re not taught about women’s history at school. They kind of rush over the hardships that women had to endure, so I think raising awareness and bringing it to the forefront of people’s minds is quite important. I hope people will watch this and be outraged, at all of it. How did women survive?

We talk about it on set all the time. Even just how women were seen as being kind of hysterical, always fainting, when it’s because they had to wear corsets and dresses so heavy that you can’t breathe in them. It’s really, really difficult, and we’re doing it like they did it. They showed us a picture of what corsets do to your organs, crushing them, and I’m like, “Oh my God, not good.” I’m not going to be doing any of that weird waist-training craze to try to make your waist so tiny. I don’t know why women do that on their own. It’s so barbaric.

Vulture: Behind Jamie and Claire’s Daybed Scene on Outlander

When production designer Gary Steele and set decorator Gina Cromwell came up with the idea for a fabulous blue velvet-and-damask daybed in the parlor of Jamie and Claire’s Parisian apartment, they knew it would be a great place to have sex — they just didn’t know who would get to take advantage. “It was kind of a joke,” writer Toni Graphia said. “‘Well, now somebody’s got to have sex in there, because that’s an awesome set.’ We wanted somebody to be caught doing the deed in there, and we thought it should be Murtagh and the maid.”

So how did it become Claire and Jamie? Showrunner Ron D. Moore, co-executive producer Maril Davis, and Graphia were discussing how our couple could reconnect after all the trauma Jamie suffered at the hand of Black Jack Randall. “We didn’t want them to just reconnect,” Graphia said. “We wanted it to be special. It’s not just one night Jamie rolls over, and tonight’s the night, ‘We’re going to have sex. I’m over this trauma.'”

The trauma — which we glimpse whenever Jamie has tried to have sex with Claire, but ends up seeing his tormenter’s face — is something the TV adaptation of Diana Gabaldon’s book series has tinkered with, since we get Jamie’s point of view more often and can see why Jamie’s been distant from Claire. “I just feel like as the TV show went forward,” Moore said, “you wanted to start broadening the perspective, and say it’s really Claire and Jamie’s story.”

Do you see him as a villain as the fans do?

Everyone asks me how it is to play such a villain, such a baddie, but as far as I am concerned in my head and in my skin when I play him, I do not feel like a baddie. He is just a human being who was wronged. The most important thing to do as an actor is to find the humanity in every single character you play, no matter how horrendously bad he is going to behave, so that the audience can find him believable. But as Stanley, I know he is a villain. He’s so bad. When you read the book or the scripts and when you watch the TV show, you see him as the enemy of the heroes Claire and Jamie and you acknowledge that he is doing outrageously bad things. But on the other hand, he is attractive: I really admire the freedom of bad guys. They have no limits, no boundaries. They do whatever they need to do to achieve their goals, and that is admirable in a way. Everyone has a dark side. He just embraces his.