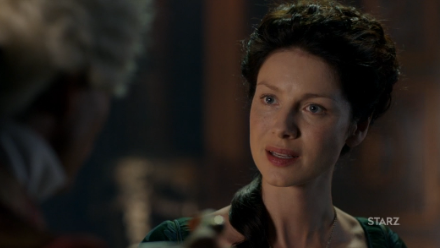 After Jamie’s duel with Black Jack Randall, it is up to Claire to find a way to win her husband’s freedom following his arrest. In the first clip from “Faith,” Claire has a private audience with the king to petition him for Jamie’s release. Click here to view the clip from episode 207.

Caitriona Balfe also spoke with Vulture about what Claire is willing to do to get Jamie back.

“Claire feels she’s equal to anyone,” actress Caitriona Balfe told Vulture. “She doesn’t accept the fact that there is hierarchy. I love that about her. Even with the king, yes, she’s aware that she has to maneuver within certain parameters, but at the same point, she feels very justified. It’s an amazing scene when she goes and asks for Jamie’s freedom.”

It’s a loaded conversation, full of subtext, and takes place in the king’s bedroom. “Now, tell me what is it I may do for you?” the king asks, as if he would be of service.

“She realizes there’s a price to pay,” Balfe said. “But she’s willing to do it. Just for her to get Jamie back, that’s worth anything.”