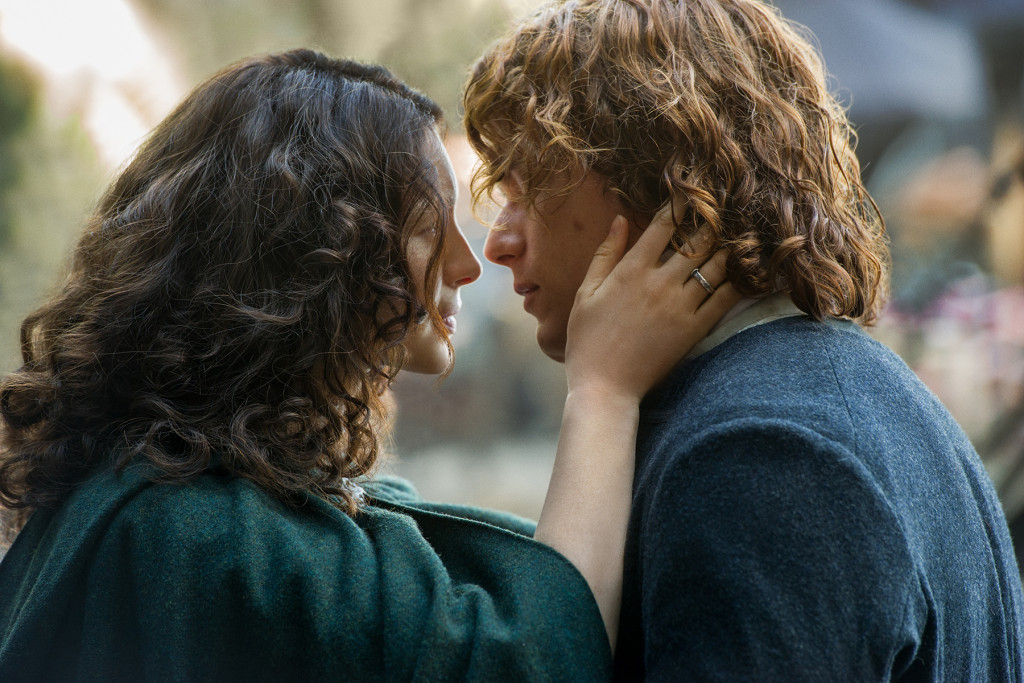 The Hollywood Reporter interviewed Sam Heughan, Caitriona Balfe, and Ronald D. Moore about the second season of Outlander.  Excerpts are below, but head over to THR to read the entire article.

“It was a big challenge,” Moore tells The Hollywood Reporter. “It was a tougher book to adapt than the first book was, because it’s more complex, it shifts time periods, it shifts point of view several times, it goes from Paris then back to Scotland, it’s half in political conspiracy, who can you trust kind of story, then it’s half a war story. It was a much bigger challenge to adapt that and figure out what kind of changes we were going to make and how to make it penetrable to an audience who has not read it.”

“I wouldn’t say it was easy doing the costumes this season. I think my wife [Outlander costume designer Terry Dresbach] would slap my hand if I said it was easy,” Moore says with a laugh. “But at least there were many more paintings and engravings from the period to go from. Whereas there really weren’t paintings of Highlanders from the period we were talking about. Most of the painting from that time were of their aristocracy, not the people, not the Jamie’s and Dougal’s of the world. There was much more reference material to go on this season.”

“He’s not talking about it. Physically, he’ll get better but mentally, he still has issues,” Heughan says. “He’s trying not to think about it and just go to work. He works all day, goes out at night and therefore, that separates him from Claire a lot. That will come to a head. That starts to come out in his dreams. He’s plagued by his past, he’s tortured by it. They’re going to need to fix their relationship, work on their intimacy and their friendship. It will tear apart their relationship until they do that.”

“You get lost in this beautiful, colorful Parisian world, and you’ll see as the season progresses, it feels like we’ve gone down a rabbit hole in some ways,” Balfe tells THR. “We’ll peel back more layers on both Claire and Jamie and we’ll see them use not very attractive sides of their personalities. There’s a lot of duplicity, a lot of lying, a lot of manipulation. They’re doing all of this for their greater mission but it’s an interesting, psychological season whereas last season was focused so much on the action.”