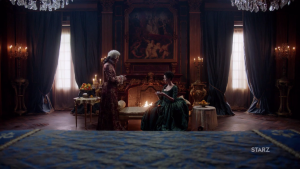 Susan Swarbrick, columnist and senior features writer at the Herald Scotland, recently toured Wardpark Studios in Cumbernauld, the Outlander sound stages. Her experience, reads like a first-person, live-action romp through the adult version of Candy Land. (Yes, the board game.)

Reader’s Note: Normally, we condense article experts into one section. I’m breaking them out for this post due to article length.

Swarbrick begins her journey at the Armory Gates, Candy Land’s Peppermint Forest if you will, with Outlander Armourer Jim Elliot:

“This is my first big job with gunpowder because for 15 years I have stayed away from it due to its unpredictability and the Scottish weather – if it rains, it ain’t firing,” says Elliott. “That is what I have to tell the director because I’m not a magician.

“It didn’t fire back in the day. Three hundred years later we are using the same stuff and it still won’t fire.

Then it’s on to the Lollypop Woods, Production and Set Design, with Jon Gary Steele and Gina Cromwell:

“Scotland was much more utilitarian,” says Steele. “This is the opposite. It is about showing how the rich lived. I think the fans will enjoy it because it is completely different.

Finally, Swarbrick rounds out her excursion with the Queen of Snow Flake Lake herself, Costume Designer (and this writer’s hard core lady crush) Terry Dresbach. For those of you who follow Terry on Twitter, yes, sweet Cuilean was reportedly there too:

“As a designer you have to be able to push your costumes down a bit and let them be in a supporting role as opposed to front and centre.”

Dresbach admits it still feels “surreal” to be working on Outlander. “I can’t think about that very often because it is too odd,” she says.

I’d find some clever way to close this summary myself, but I love Swarbrick’s:

Leaving Dresbach to her button collection and blow torch, my time on Outlander has come to an end. I lay a hopeful hand on the standing stones one last time as I leave, but it’s back to Glasgow for me.