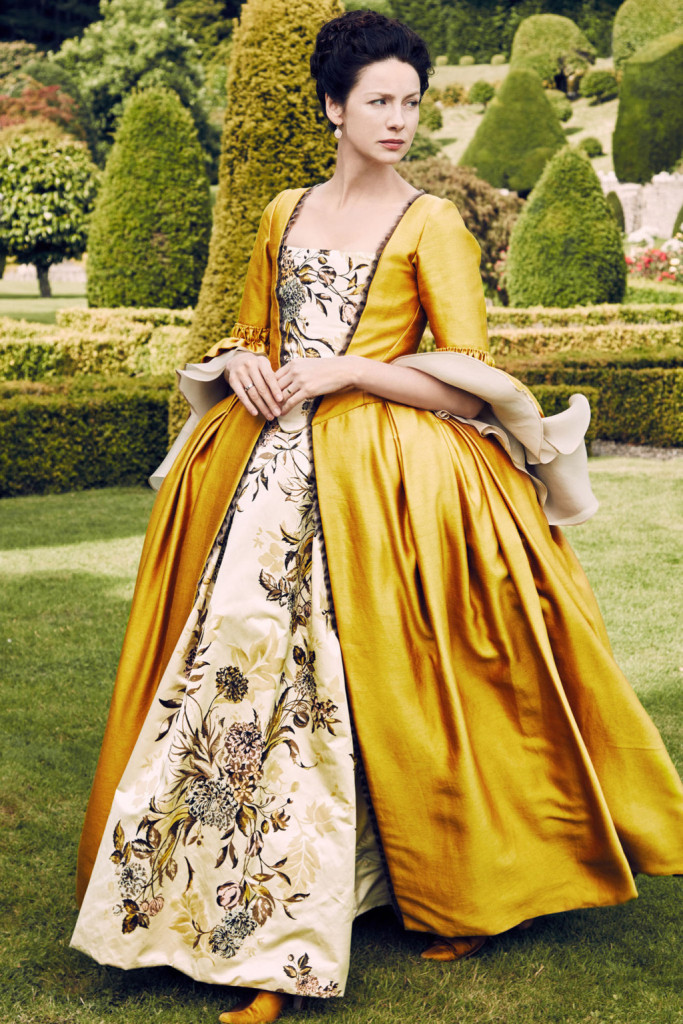 The Outlander costumes do look spectacular this season, not that last season’s were not, but they are set in a completely different world.  Costume designer Terry Dresbach spoke with Women’s Wear Daily about the costumes and how this season is even bigger than the last.  Excerpts are below, but read the entire article at WWD.

“Caitriona [Balfe, who plays Claire] and the other actresses could no longer get dressed in their trailers because they couldn’t fit through the doors. In 18th-century buildings, the doors weren’t really wide — and we didn’t make the dresses as wide as they actually would have been. Jamie [played by Sam Heughan] would’ve been standing 12 feet away from Claire and they would’ve been waving at each other.” Makeshift dressing rooms were installed in several of the period buildings they shot in.

“In season one, Claire has about six to eight changes in her costume,” she says. “In season two, she has, like, 25.” And it wasn’t as if these pieces were quick to throw together: “[Creating] one of Claire’s dresses takes about a month,” Dresbach says. “So we had to figure out how to mass-produce the 18th century.”

The Forties inspirations were drawn from a range of European designers, including Balenciaga, Dior and Valentino. “Anybody who knows fashion can draw direct lines from Claire’s costumes to fashion of the Forties,” Dresbach says. “That’s the period Claire came from, and all of those incredible designers from 1946, 1947, they all came out of World War II, and so did Claire. We wanted to create that sensibility for the show.”