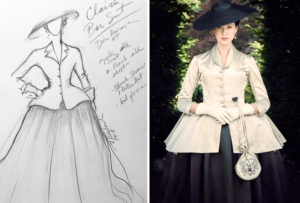 How does one visually demonstrate a 20th Century, modern woman with thoroughly modern taste, but limited to only 18th Century fashion options?

Vanity Fair got Outlander Costume Designer Terry Dresbach on the phone to discuss the outfit that just might maybe possibly outshine the novel’s infamous “Red Dress.”

Her inspiration derived from Claire’s (Caitriona Balfe’s) point of origin, the 1940s; a time when women were the workforce while men were off to war. This is the era famous for redefining women’s fashion as simultaneously strong and feminine. (And if that isn’t Claire, then I don’t know what is.)

“You can’t go to the 40s, one of the most famous periods in fashion, without looking at Christian Dior’s New Look,” Dresbach said of the visionary’s iconic post-war designs, which helped revive high fashion and revolutionize style with higher hemlines and lower necklines. While researching, Dresbach realized that Dior created his New Look in 1946 and 1947, the exact same time period during which Claire travels in Outlander, an uncanny overlap that Dresbach mined heavily.

“People are seeing [Claire’s second-season costumes] now and kind of going, ‘That doesn’t look period correct.’ Well, it’s not, but it’s not supposed to be. Claire is not an 18th-century woman. She’s a woman of the 40s re-interpreting 18th-century fashion to fit her tastes. And with Dior, when you start looking carefully at what he was doing, you see that he was reaching back in history to the 18th and 19th centuries, taking things like a woman’s riding suit and translating it forward into one of the most famous pieces of clothing in history, the bar suit.”

“All the costumes for Season 2 pivot on this one costume,” Dresbach explained. “I wanted Claire and [Christian Dior] to converge in history so that they were both striping these clothes of all the extra bits and getting down to the essential silhouette that defines the New Look and then defines Claire as a modern women in the 18th century. That off-white jacket over the black skirt, with the hat off at a slant across her head—that suit blew everybody away, inspired an absolute fashion revolution, and put women who had previously been walking around in trousers back into corsets…”