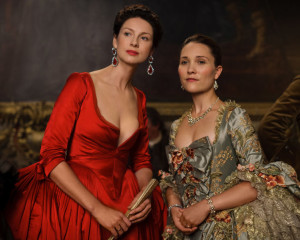 FYI, some of the questions reference the revealing “swan” dress and its nipple adornments worn by Madame Nesle de la Tourelle  from episode 202, Not in Scotland Anymore.

1. Fashion, in general, used to be much more badass:

“People think that we are risqué now, but we have nothing on history in terms of risqué fashion. In the late 18th century, around the time of Napoleon, they made dresses that were made out of sheer gauze, that they would then wet. It would make a wet T-shirt contest look like you were wearing wool.”

“You always have time constraints, you know? Are you going to hire a jeweler to make this? So it ended up being me sculpting those swans on my kitchen table, and my kids walking in the room and saying, ‘What are you doing?’ And I’m like, ‘I’m making nipple jewelry, kids.’ They’re teenagers, and they just roll their eyes, like, ‘Mom, can’t you be normal?'”

“Then, of course, you have to figure out how you’re going to attach [the nipple clamps you just made]. You’re standing there with an actress, trying to glue swans on her breast, and make sure the piercing goes–it’s crazy. It’s those moments where you just go, ‘What am I doing for a living? What is this job?'”

5. Her couture creations—which she would value in the $20-$25K range each—could drive a sane craftsman mad:

6. Back in the 18th century, “high street” simply wasn’t an option:

7. Sometimes you simply have to Tim Gunn it (with respect to historical accuracy, of course):

“We didn’t have enough people and time to embroider every costume. So then you turn around and you say, ‘Okay, what are we going to do? Maybe let’s hand paint things.'” We would have ideas, and be like, ‘Okay, let’s go do research and see if they actually did that. Oh look, they did, they did!’ Great, now we’re painting things.'”

8. Fashion was better before it became an “industry”:

“Fashion has always been over-the-top. It’s always been for the wealthy. The difference is how many people actually saw them. In 18th century Paris, they weren’t wandering around the streets, there was no red carpet Fashion Policeshow. The average person would never know what somebody wore to whatever event that was. And now, it’s all televised. So, red carpet becomes an industry, which it is now. It’s an industry. Anybody is fair game with what they wear. And that’s the real difference.”

9. And fear and fashion simply do not mix (just ask Cate Blanchett):

“The whole thing becomes very totalitarian. It becomes very fear-based, because you look at Hollywood and the actresses who wear couture are really few and far between,” Dresbach says. “You look at Cate Blanchett, and she takes risks all over the place, but the mainstream press and most people who are watching go, ‘What the hell does she have on?'”

10. Ultimately, it’s about knowing what’s worth it:

“I took my daughter shopping at her favorite store, and she’s going to be 15 soon. She ended up going into a section and finding like ’80s rock T-shirts that were like $160 each! And I was like, ‘No. The price point’s too high for what it is. And they’ve already put holes in it. No.’ But she’s not going to be ready to wear the thing that’s $180 dollars that feels like it should cost that much. So we’re not shopping at those clothes stores yet. When we get there, then we will, when she’s ready. But you look at couture and you look at the work, and the labor, and the beauty, and the detail, and it’s not the same as that thing you buy at Target. It’s just not. We need to view fashion through a different eye, because some things should cost a lot of money, and some things just shouldn’t cost as much as they do.”

WARNING: Before clicking the link below, be advised of partial nudity in photos within the article.