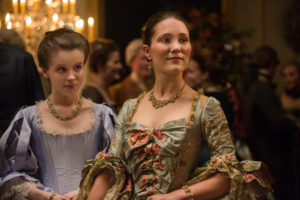 In her interview with Access Hollywood, the French actress discusses the day she was cast and how she prepared for the role.