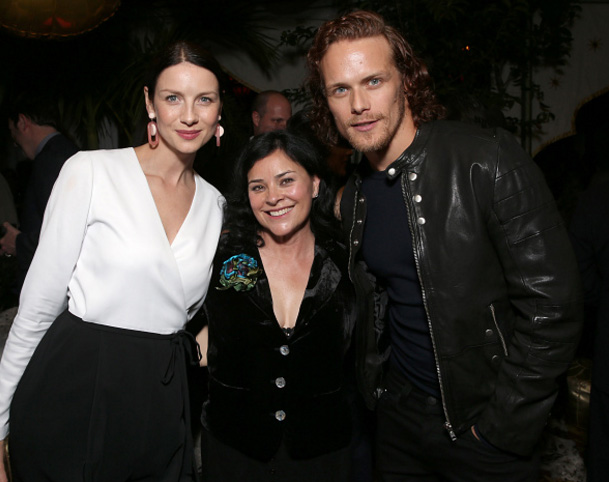 Diana Gabaldon gave an interview to the Arizona Public Media in anticipation of her appearance at Tucson Festival of Books on March 11 and 12.  While long-time fans have heard many of her stories and the background of the Outlander novels many times, there is just something about her wit that makes me laugh.  She can be very direct and the below quotes are a testament of this.  This all has to do with getting her novels moved out of the “romance” section at Barnes & Noble.

Here’s what Gabaldon had to say about her struggle with Barnes & Noble Booksellers on getting her series moved to the fiction section after Voyager, the third novel, was released and made its way onto the New York Times bestsellers list.

Gabaldon: Well Barnes & Noble, the perfect monoliths that they are, essentially said if you call the first thing you write a romance then as far as we’re concerned anything you write for the rest of your life is romance and they kept sticking them on the romance shelf no matter what they looked like.

Stanford: And so how did you prompt Barnes and Nobles to move your novels?

Gabaldon: It took me eight years of wrestling with Barnes & Noble before I worked my way up to Steve Riggio who was the CEO, and I wrote to him and said, “Mr. Riggio, I’m assuming you know my name because it shows up at the top of the New York Times best-seller list every time a book of mine comes out, and I assume further you’re familiar with my books since they take up so much real estate in your store. I’m assuming you don’t know that Hasting’s, which is a smaller chain, sells 40 percent more of my titles than you do, and I do assume that you’d like to know why this is. Well, I’ll tell you Steve, they’re not putting them in the ‘effing romance section!”

You can listen to the interview and more quotes at Arizona Public Media site.