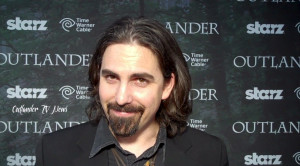 I hate bagpipes. There. I said it. I’ve never cared for them. Or perhaps that’s what I’d like to think. When I look back at movies that left a firm impression on the mind of young Amanda, the common thread defining the depth of that imprint was the score. I say this because in spite of my alleged loathing of bagpipes, I recall countless teenaged nights scribbling stories in journals, to James Horner’s Brave Heart soundtrack on repeat.

Only since Outlander (and my 30’s) have I truly embraced my love for all things Scottish, and more important all things bagpipe. And I have one person to thank: Bear McCreary.

Bear’s recent interview with Sci-Fi Bulletin touches on his numerous acclaimed scores, but what I love most is his description of the Skye Boat Song for Outlander and its progression. Much like the show, it evolved into something beyond expectation while staying true to the source material.

Because after all, admitting you have a problem with bagpipes is the first step toward acceptance, right?

If you do have that on Outlander, would you write the themes so that they can mesh, or are they the theme that is right at the time, so the fact they’re in opposing keys, or metres is irrelevant…

I need to know some but personally there is a breaking point where it just becomes overwhelming, and at the end of the day, I’m always scoring one episode at a time, one scene at a time. I get into the micro: I’m scoring one frame, one reveal, one moment. The big picture always helps guide me but at the end of the day, I can’t be overwhelmed and question whether if this cue isn’t right, in three years, I’ll be wishing I did something different. Otherwise I’d never get anything done!

Do you write out everything for the musicians or is there an element of improv in there?

There’s far less improvisation than I think it sounds like. I’m matching picture so I really have to give very strict guidelines. So, for example, something that I won’t write out specifically necessarily is an accompanimental fiddle part, where I know my fiddle player will know what to do. I’m not going to write out the exact double stops. I’ll put in something that evokes what I want it to feel like, and then he knows that he can make it his own.

The choice of the Skye Boat Song as the title music – was that yours? Or was it brought to you?

It was actually a mutual decision. I was talking with Ron and he mentioned he was doing Outlander. I told him that the music of the Jacobite uprising was a bit of a passion of mine at high school. I knew all the songs, their double meanings, their histories. He was really shocked: he’d been pitching and developing the show, and had been mastering this one-minute history of what the Jacobite uprising was. He went, “You know what a Jacobite is?!” I said I’d send him a couple of my favourite songs.

The first thing I thought was, “Oh it sounds like I’m going to be working on Outlander then.” The second thing I thought was that we had very early in the process made a major decision that I was glad was made, because it meant I could focus on other things. Ron was really excited about the theme, and admittedly it is a really beautiful melody – but other decisions were yet to be made.

Originally we were just going to use the solo accordion; that’s how it started. Then we thought we’d make it a little bigger and brought it some strings, then a little bigger – then I started playing around the idea of having someone singing.

That’s where it really gelled, when I brought my wife, Raya Yarborough, in just to sing a demo. I wanted him to hear what it would sound like with a voice – but she really has a tremendous voice and when Ron heard that, it was like everything crystallized very quickly after that.