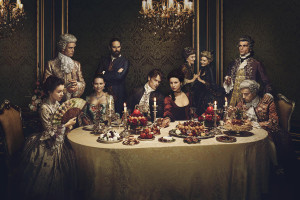 Writers Bloc Presents (WBP) invites you to A Tribute to Outlander, Thursday, March 31, 2016, in Beverly Hills. Our favorite acclaimed writers and actors from the Starz series adaptation of Diana Gabaldon’s Outlander (and subsequent works) will take the stage, in preparation of the season two premier. Described by WBP as “…a combustible cocktail of love story, historical fiction, adventure, and just great storytelling,” it will no doubt be an evening to remember.

*Author’s Note: Where in the H-E-double-hockey-sticks are Terry and Bear?!