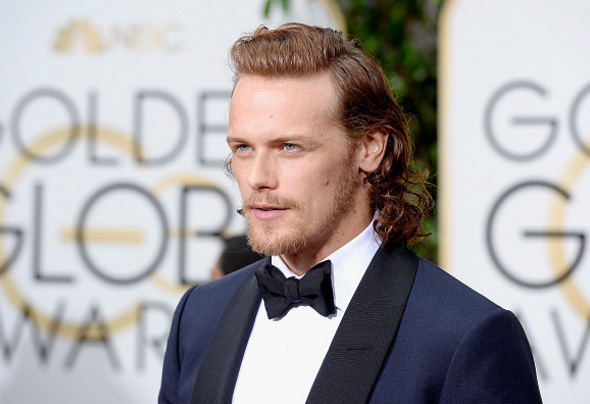 Today it was announced that Outlander’s Sam Heughan (Jamie Fraser) will be the Grand Marshal for the 18th annual New York Tartan Day Parade. Sam will be the most recent name on an impressive list that includes Alan Cumming, Sir Sean Connery, Kevin McKidd, and the 2015 Grand Marshal Graham McTavish (Dougal MacKenzie).  The parade will be held on April 9th 2016 and is just one of the events during a week long celebration of Scottish Heritage. New York Tartan Week will run from April 2nd until April 10th, and the announcement of Heughan as Grand Marshal makes the day more special since April 9th is also the announced premiere date for Season 2 of Outlander.

Last year over 300 Outlander fans from around the world came together as Outlanders United and participated. This year there are over 400 registered to participate in the 2016 New York Tartan Day Parade, with many more coming to spectate and support the New York Tartan Week Committee and Sam.

The Tartan Day Parade is the largest celebration of Scottish heritage and pride in the US, and features hundreds of pipers, dancers and dogs in a march up the center of Manhattan.

“Outlander” is currently filming Season Two on location in Scotland which will premiere on Starz April 9th, at 9pm et/pt.

Heughan says, “As Grand Marshal of the New York Tartan Day parade 2016, I am honored and proud to serve the city and its ancestral ties. I love the city, the people and the vibe. Please join me in toasting all who live and visit there with a whisky and a toast!”

“Address to New York” – stolen and plagiarized from Robbie Burns….

“Thy sons, Yankies, social, kind,
With open arms the stranger hail;
Their views enlarg’d, their liberal mind,
Above the expansive, city vale.
Thy daughters bright thy walks adorn,
Gay as the gilded summer sky,
Pioneers, Citizens, Bronx or Hudson Born,
Thy island strikes the adorning eye.

New York! Scotia’s family seat,
All hail thy palaces and towers,
Where once a year, Scotch Monarchs meet,
And March,
Honored on America’s avenue of powers.”

The Tartan Day Parade is the highlight of celebrations which will run from April 2nd to 10th, which includes a diverse range of events, from the Scotland Run through Central Park, to lunch-time concerts, business seminars, a Pre-Parade Ceilidh – and much more.

Bands, Pipers, Dancers and Clans from Scotland, and throughout the United States and Canada, are joining the Parade, along with hundreds of Scottish and West Highland Terriers.

Also highly anticipated are the 2016 Up Helly Aa Jarl Squad, from Shetland. Also joining the Parade from Scotland will be the Edinburgh Academy Pipe Band and Strathallan School Pipe Band, among over 30 bands taking part in the celebration.

The Parade is organized by The National Tartan Day New York Committee, a 501C3 Not For Profit registered charity. The Organization comprises the St Andrews Society of the State of New York, the New York Caledonian Club, The American-Scottish Foundation and Clan Campbell.

The New York Tartan Day Parade began 18 years ago with a handful of people walking down a sidewalk, and has now grown to be the culminating celebration of over ten days of events that will take place throughout New York.

“I remember well the first Tartan Day Parade along the sidewalks of Third Avenue. I am proud this year, on our 18th Anniversary of the Parade, to see us grow from strength to strength, we hope you will join us on the Avenue,” said Alan Bain, President of the National Tartan Day New York Committee, the Parade organizers.

Sam Heughan is a graduate of the Royal Scottish Academy of Music and Drama. In 2003 he was nominated for a Laurence Olivier Award for Most Promising Performance for his role in “Outlying Islands” by David Greig at The Royal Court and Traverse Theatre.
Heughan originated the role of Batman in the 2011 DC/Warner Bros. and Waterlane production of “Batman Live,” an international tour which opened at the Staples Center in Los Angeles and went on tour to Las Vegas, South America and throughout the U.K and Europe.

He has also had roles in a range of television series including “River City,” “Island at War,” “The Wild West,” “Party Animals,” “Midsomer Murders,” “Rebus” and most recently, “Any Human Heart” as Lieutenant McStay.

His TV movie credits include “Breaking the Mould” for BBC Television, “A Very British Sex Scandal” for Channel 4 and “First Light” for BBC2, an adaptation of the book, where he played the lead character Geoffrey Wellum. He was nominated for a Grace Award for his performance as Prince Ashton, the son of Sir Roger Moore, in “A Princess for Christmas” for Hallmark Channel.

His film credits include the short film Small Moments, and the feature films Young Alexander the Great and Emulsion. He will also be seen in the upcoming films Heart of Lightness – filmed in Norway in the Arctic Circle – and playing the lead role in When The Starlight Ends, an Independent movie shot in Los Angeles for Intellectual Films.

On stage, Heughan has performed at a variety of theaters in the U.K. in various classical and new writing pieces, plus the London West End, including such productions as “King John,” “Romeo and Juliet,” “The Vortex,” “Hamlet,” “Macbeth,” “The Talented Mr. Ripley,” “Plague over England” and more.

At the Royal Scottish Academy, Heughan starred in productions including “Crime & Punishment,” “The Seagull” and “Prometheus Bound.”

Sam created My Peak Challenge, a charity fitness event and brand. In collaboration with Leukemia Lymphoma Research, Bear Strength Clothing and Fight Camp Glasgow, they have raised thousands for charity.