If only those eyebrows could talk. Starz just released another official Outlander Season Two photo. This one features Murtagh (Duncan Lacroix), Jamie’s stedfast godfather and partner-in-crime. He cleans up quite nicely.

Seen here, looking quite stately among what appears to be the finer surroundings of the France storyline, something tells me Murtagh FitzGibbons Fraser would be far more content grubby and sleeping under the highland stars.

I hope he’s as mighty with the pen, I mean quill, as he is with the sword. 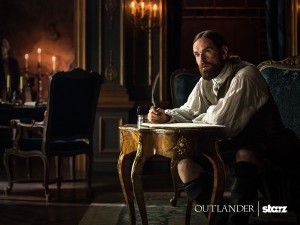