Starz just released yet another season two official photo of Claire (Caitriona Balfe) doing what she does best, handling the situation.

“Stand back, Outlanders! We’ll release the Season Two premiere date soon!” (Or at least that’s what she’s saying in my head…) 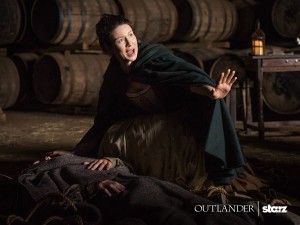 There's no time to waste when a life is at stake. #Outlander pic.twitter.com/qz9s2qXlSF