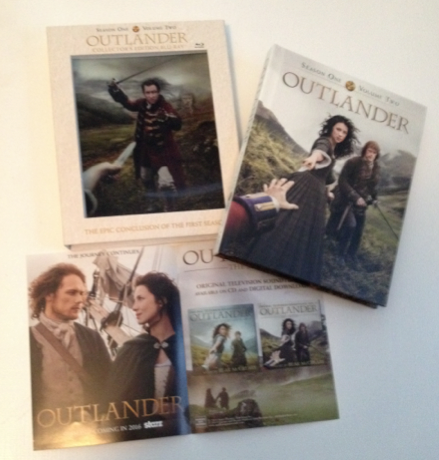 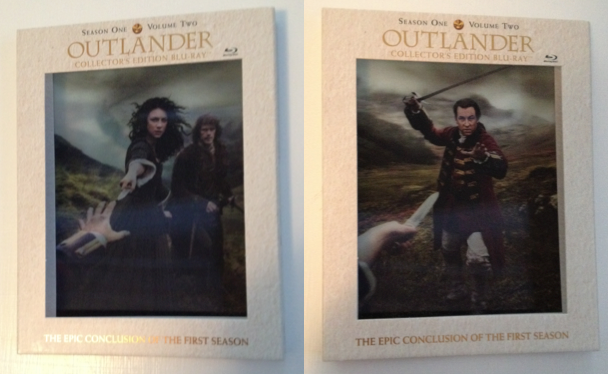 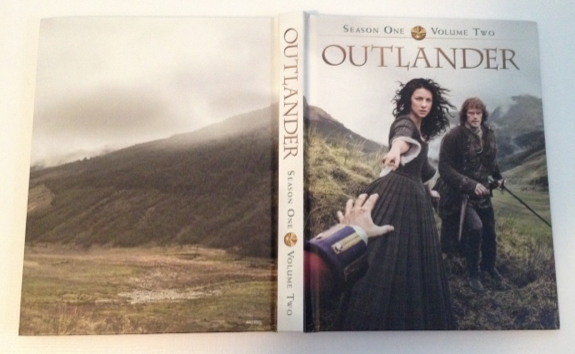 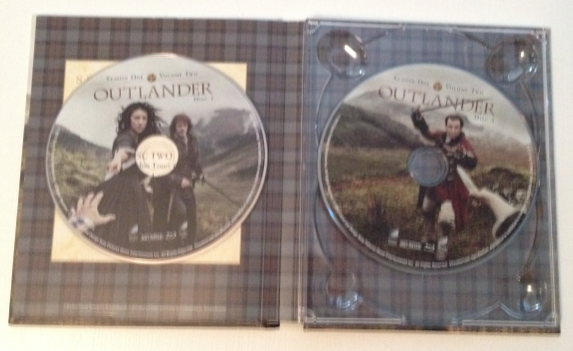 Disc/Menu Basics
-The menus are similar on each disc, with each featuring a familiar promotional image as the back ground (below).
-Each disc has four options: Play All Episodes, Episode Selections, Subtitles, and Special Features.
*Although a Special Features option appears on disc one, all the extras are on disc two.*
-The Play All Episodes feature allows you to view the episodes with recaps.
-The Episode Selection option allow you to view the episodes with Ronald D. Moore’s Outlander podcast commentary. 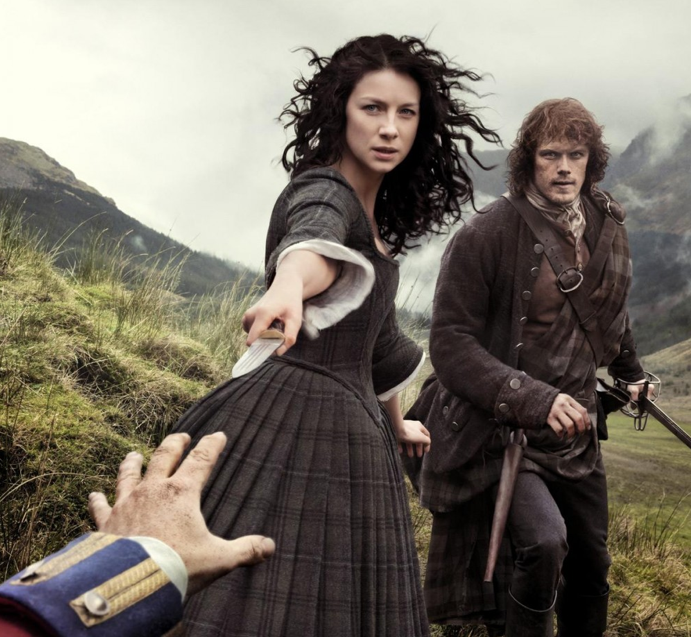 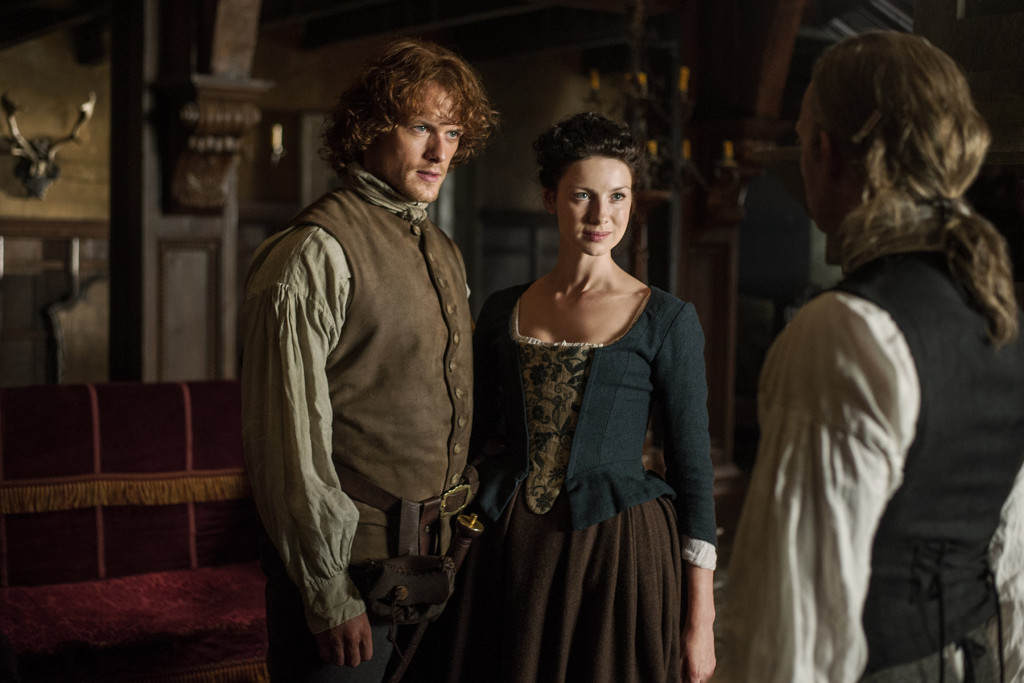 The disc also features a gag reel and deleted scenes.

Diana Gabaldon Tours Outlander features highlights from the author’s visit to the set around the time of “The Gathering”‘s production.

The short feature allows fans to take a peek behind the scenes of the cast and crew’s table reads for “The Way Out” (episode 103) and “The Gathering” (episode 104).

A Triangle in Time examines Claire’s relationship with both Jamie and Frank. The feature also takes a look at Captain Randall’s role in these relationships.

Weaving Authentic takes an interesting look at how fabrics are created for Outlander from Anthony Haines Textiles in Scotland.

Gag Reel (4:44)
The gag reel features the cast’s blunders from all sixteen episodes season one. A portion of the feature can be viewed below.

“By the Pricking of My Thumbs”
I’m No Stable Boy (2:32)
Jamie and Claire discuss him acting as the Duke’s second in the duel.

“The Devil’s Mark”
“I Ordered You Ned” (2:33)
Ned returns to Castle Leoch after the trial.

“The Watch”
“Your Baby is on its Way” (2:24)
Claire informs Ian that Jenny has gone into labor.

“The Watch”
“My Best Days Were Spent Soldiering” (2:17)
Ian tells Jamie he has considered becoming a soldier once again.

“The Watch”
“Life of Adventure” (1:38)
Taran MacQuarrie discusses his life of adventure with Jamie.

“The Search”
“The Simple Things” (3:31)
*Claire’s voiceover is performed by Charlotte Walsh, the show’s UK post-production coordinator*
Claire remembers waking up at Lallybroch to watch Jamie put on his kilt in the morning.

“The Search”
“I Vow to Protect You” (2:27)
Murtagh promises to protect Claire if they lose Jamie. 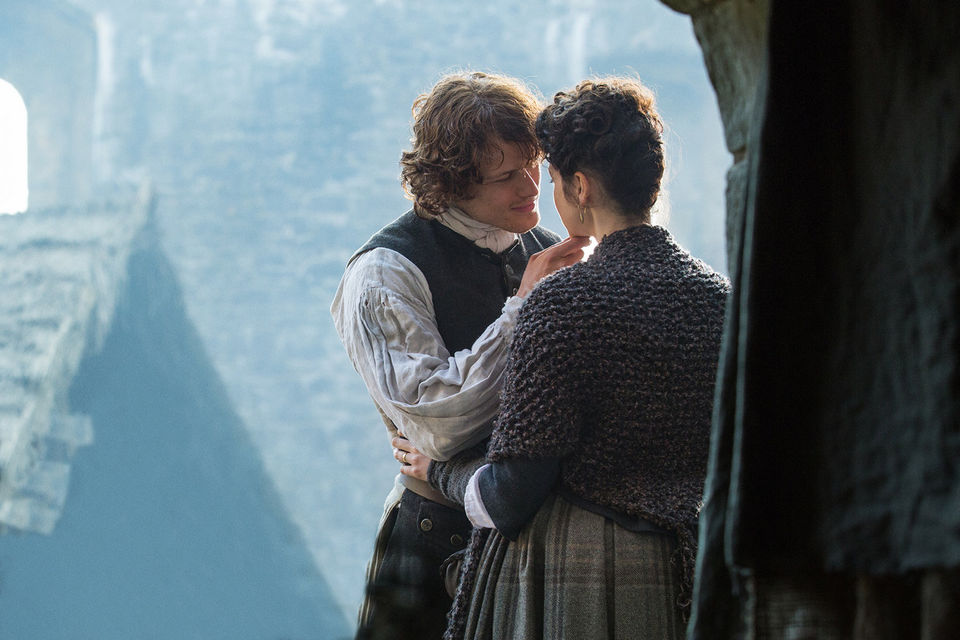 Review:
The first eight episodes of season one were collected in a previous DVD/Blu-ray set, which was released earlier this year, and now the final eight episodes are also available to own in another lovely set. Many fans were disappointed to have the season split for its home video release, but both volumes provide plenty of content to please Outlander fans.

The featurettes included in the set provide interesting behind the scenes information for fans, especially Weaving Authentic: Making the Fabrics of Outlander, which shows how the tartans used in the show are manufactured. Another interesting component of this set is the table read featurette. It is strange, but also delightful to watch the actors read through scenes in their contemporary clothing. As with the special features for Volume One, some of the information featured here has been released or discussed somewhere else, so fans who keep up with all things Outlander may find some of the features repetitive.

Compared to the twenty-one deleted scenes found on Volume One’s Blu-ray, the eight here seem like slim pickings, but do not mistake quantity over quality. If the two deleted scenes between Ned and Colum were all this set had to offer, I would be satisfied with the extra footage, but Claire’s flashback and Murtagh’s vow in “The Search” are also fantastic additions to the set.

As did the previous set, Volume Two also features a 32 page book with official stills that were released throughout the season. 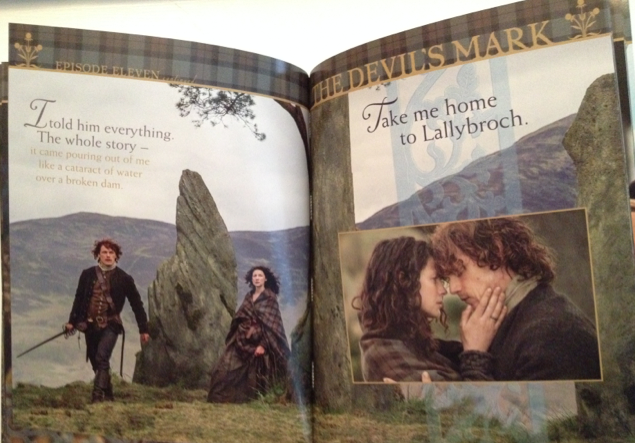 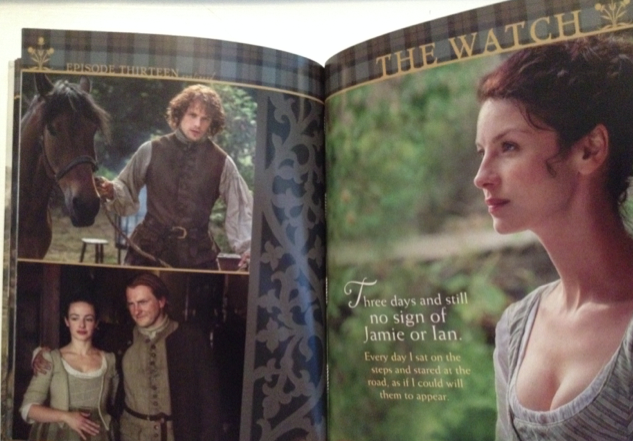 My biggest gripe with the set is once again the packaging. When Volume One was released, there was a placeholder in the box for Volume Two, and while I appreciate the foresight to leave room for Volume Two, I am not a fan of taking the set apart and putting it back together with each viewing. While both fit snug in the box, it is not the best design for ease of access. There is also the problem of excess pieces, as the placeholder and the slipcover for Volume Two may now find a home in the trash as they simply do not belong in the combined set. 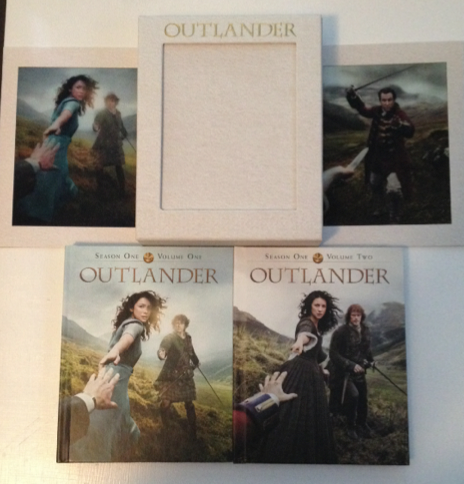 I do believe a complete first season may be somewhere on the horizon, but for now fans of Outlander should be pleased with both Blu-ray releases of season one.

Outlander Season One, Volume Two is also available on DVD and as a regular Blu-ray set. The show returns for its second season in 2016 on Starz.