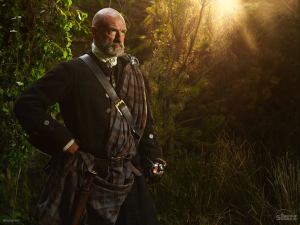 Outlander’s Graham McTavish recently delighted fans with a panel discussion that was less panel and more audience Q&A at this year’s FanExpo Canada in Toronto. While he regaled fans with anecdotes of prior roles and on-set shenanigans, he also provided insight into the motivations behind some of our beloved Dougal MacKenzie’s less-favorable actions.

Also, apparently our favorite curmudgeon with a heart of gold, Murtagh (Duncan Lacroix) is hysterical in real life! Who knew?

Below is a summary all things Outlander. Head over to SpoilerTV.com for the complete Q&A synopsis.

He said it was great working in Scotland as the people – cast and crew – are more easy going and no one takes themselves too seriously. He said that Duncan (Lacroix) who plays Murtagh is hilarious. It’s important to have an easy going group of people when the shooting can be tiring – long hours, cold etc. He acknowledged that some people just like to cause drama and that’s never helpful – and that didn’t happen on either of these sets.

He was asked about Dougal’s attraction to Claire. He attributed to her being a strong woman and clearly he’s attracted to strong women… and women from the future. And then there’s the stupidity of people always being attracted to the one person who is not attracted to them! She is a frustrating experience for Dougal.

He was asked whether Dougal was a good guy or a bad guy. He stressed that it was not that simple. He’s a great character because he is complicated. He is manipulative and has his own agenda – to restore the Stewart monarchy – but he also has this love for Jaime – even while he’s plotting to kill him, he saves him. He’s also capable of great compassion. McTavish said that Black Jack Randall is a better example of a “bad” character.

He was asked if he’d read the books, and he said he’d read and very much enjoyed the first two, but hadn’t read them prior to the show. Apparently, when Gabaldon wrote the novels, Claire was always very sassy and outspoken but was initially written as an eighteenth century woman. It was because she was so outspoken that Garibaldi [sic] felt she had to come from the future.

When asked about the difference between British and American television, McTavish commented on the very cinematic treatment of Outlander. He said that there’s a lot more money for the lavish costuming – which will be even more prevalent in season two!