Say the name Davina Porter to a group of Outlander fans and you are sure to get more than a few smiles, and many will say her voice is THE voice of their “Claire and Jamie”. This is because Davina Porter is the narrator of the unabridged audio versions of the Outlander book series.
On Sunday September 27, 2015 Davina was on hand at the 2015 Fall for the Book event held on the George Mason Campus in Fairfax Virginia. After a private luncheon with Diana Gabaldon, and 10 VIP Members, Davina took to the stage in the Harris Theater. She used her entrance which was slightly slowed by use of a cane and wrapped leg (due to an incident with “a dog, a leash, and a chipmunk, and that’s all you need to know about that”) to immediately begin a lesson in extending the audiences Scots vocabulary with the word “Hirple”. 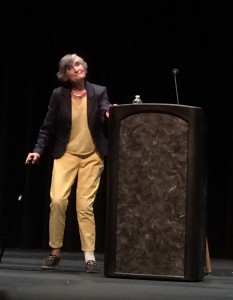 Once onstage Davina jumped right in to her history and how she got started with narrating audio books. Her first recorded book was Culloden by John Prebble. When she read the ad for Culloden she noticed that they were looking for a native Scot to narrate, she thought she would take a chance since both her mother and husband were native born. This lead to regaling the audience of her misadventure’s within New York City during the audition process, which included a suit, a cab, recording her audition in a sealed meat locker, and her eventually getting the position because she was told “Scots are completely incomprehensible”.

In the early days of audio book recording she recorded in very unique settings, a smelly studio set above a NYC garbage truck repair shop, a storage room that also held props for various Broadway shows, and her favorite, above a brewery that guaranteed her lunch break when the barrels started to roll.

After describing recording locations and her career start Davina broke down her process, how she delves into the projects and gave insight into what you need to think about as an audio book narrator (best find a cotton nightie that just hangs from your neck). Her process is detailed and meticulous, first she reads the book, then lists all the characters including their age, if they are villains and other needed characteristics, looks for author cues as to how to voice them without giving the story away, and marks all words that have various pronunciations and adjusts to where each character is from. She learned all of these items the hard way after narrating almost entire books and finding out at the end that she had composed a voice incorrectly, (ah, dear Old Aunt Harriett with her low melodious voice which was her only beautiful quality). As for Davina’s insights she brought audience members to tears of laughter over describing her what to wear and NOT wear, when to eat, and what to do about itches and mouth clicks, yes, mouth clicks

Once the room had been able to compose themselves Davina moved into her favorite part of an engagement, the reading. She read excerpts from Outlander both the passages where Claire goes to the stones and describes what happens once she touches them, and the setting of the shoulder in a cottage room full of Highlanders (or the first meeting). After finishing these passages she laughed and said she “counted at least 6 stumbles that would mean I would have to go back and re-do the whole thing”. The next passage was from Written in My Own Heart’s Blood, Chapter 26 where Rob Cameron has come to confront Brianna and the scuffle at Lallybroch. Before her final reading she did a small Q&A session then for the final reading selection, which brought another round of tears to the audience as well as a deep emotional haze over the room, she read Chapter 12 from An Echo in the Bone, where “they” (I am keeping this as spoiler free as possible) leave from the ridge. Thus ending her presentation and leaving everyone to take in a big breath and process the magic that is Diana Gabaldon when read out loud by Davina Porter. Davina is currently working on recording the Outlandish Companion Volume Two. 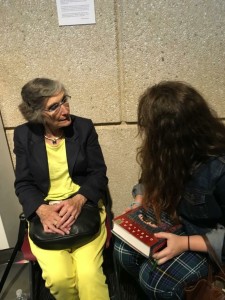 1) What are your favorite words?
Davina- Words I can pronounce

2) Do you like to keep your main character as close to your natural speech as possible?
Davina- Yes, Claire was a no brainer, smart, educated, I like to think of myself as Claire. I even have a Jamie, he is tall, and distinguished even if he is bald. (Her supportive husband was sitting in the front row beside Diana)

3) Could you please say Claire’s “certain phrase”
Davina- Do you mean Jesus H. Roosevelt Christ? She is a naughty lady isn’t she?

Extra Question I had the privilege to ask Davina at a separate time: Do you ever have to leave the recording room to take a moment during those strong emotional scenes that Diana writes?
Davina- Yes!! When reading it is almost clinical to when you are reading aloud, I become these characters for the readings, I AM these characters and sometimes it really does get gut wrenching doesn’t it? So, yes, I do have to take a break and leave sometimes. 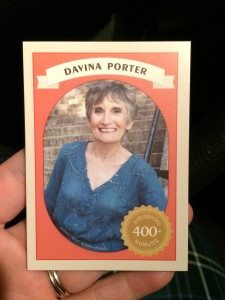 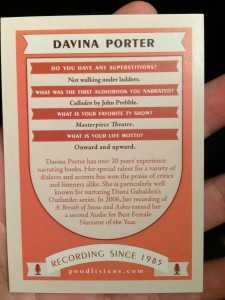 Davina Porter reading from Outlander– Claire and the Stones