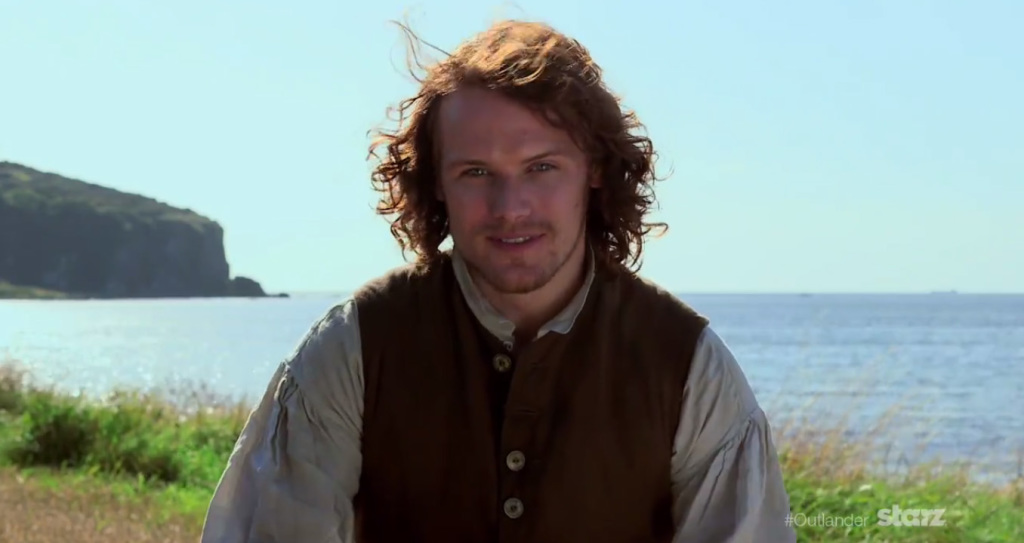 The Wrap asked Sam Heughan six questions as a “strong contender” for an Emmy.  He answers questions about “fun” things he has done on set, his Emmy-worthy co-stars and crew, and describing Outlander to someone who has never heard of it before.

What was the funnest thing you got to do this season?
I would say I kind of enjoyed that stuff. Maybe I’m a glutton for punishment but I enjoy anything where you get to flex your acting muscles, you get to really go for it. In the second half of the season my character got a lot more to do and you see a lot more of his point of view. There’s some great scenes between myself and Caitriona’s character Claire, especially the one by the river in Episode 10 where it’s the first time you get to see us really going at each other and I enjoy that, it’s really fun to do. You’re outdoors, you have this whole story built up where I rescued her from the clutches of Black Jack Randall and there’s a lot of emotion involved. It just felt like a day where it’s more about the acting as opposed to getting the right shots or the location or whatever. So any day where you get to let off steam is great.

Let’s assume someone who’s been living under a rock has never heard of “Outlander.” What would you say to convince them to watch it?
I’ll probably say I’ll give them a bottle of whiskey if they watch it. I would say it’s based on a series of books, it’s an action adventure, historical romance with time travel, but ultimately it’s a really good story with some great characters. It’s maybe a slow burner but people want to invest in a TV show and we give them that. If you watch our show, you’ll get sucked into Scotland and the world they’re in. It just gets stronger and stronger each episode.

Who else on the show really deserves an Emmy and why?
I think everybody does. Caitriona is terrific. She has so much stamina and she carries the show. She has to show up everyday and just give her best. Tobias, equally, he’s an amazing actor. Those last couple of episodes where I really sort of got to go to some interesting places, he was there and we really supported each other and trusted each other. I think trust is the most important thing. If the actors and the director and the crew trust each other and you set up perimeters and boundaries, you give everyone space to do great work. I think we’ve got an amazing costume department, amazing writers, directors — just give us an Emmy for everything.

Sam continues on to answer questions about tough scenes, binge watching, and “The Ginger Award.”