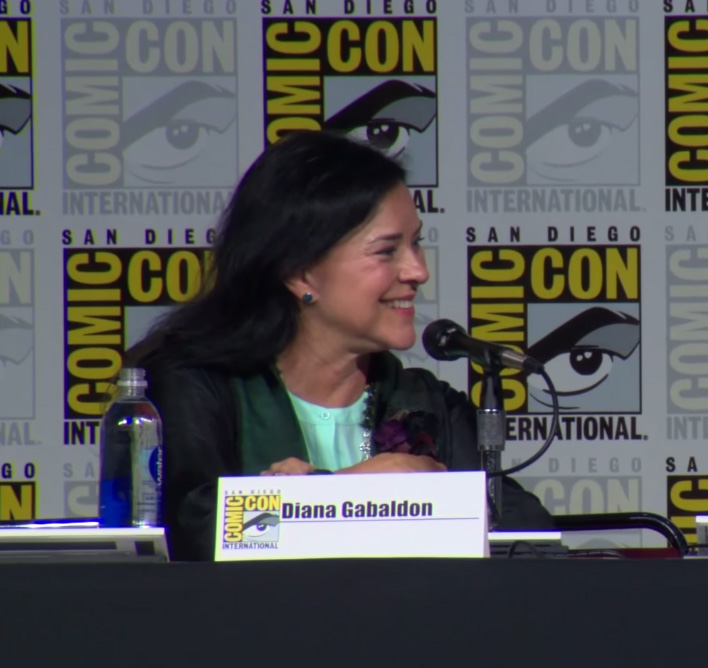 I spoke to author Diana Gabaldon about the television adaptation of her book series,Outlander. In a roundtable setting, we were able to ask some questions you may have not heard some of the answers before. Other questions and answers may sound familiar to fans from Diana’s other interviews. She began our interview with commenting on how large our recording devices were compared to the last roundtable she was at.

Q: What was your reaction to the very first episode they allowed you to see?

Diana: I was just blown away by it. I actually got to see it in the production suite with the film editor and Ron, and they were showing me the rough cuts of the first two episodes together. It was so sweet. The film editor actually cried (cue the “Aww” sound from all of us) because he said, “it was so great to see you see this for the first time.”

Outlander Podcast: As we wait of course to learn who will be cast as Brianna and Roger, what are some of their individual characteristics from the novels that you look forward to seeing being brought to screen?

Diana:  It is hard to say because so much of it depends on the actor, what they can do. NowSam Heughan for instance is a very analytical actor, and he has read the books several times. You can see him do Jamie’s little physical things like drumming his fingers while he is thinking and so forth which he has picked up and those are conscious decisions. At the same time, he/you grasp(s) the emotional sense of Jamie. The very first time I saw him in an audition tape, I thought (makes a face) I never thought they would find anyone who could do that and he just did just like that. It was just amazing. At the same time, there was this certain “Sam-ness” to him. It is very weird to be sharing joint custody with a character. Well, with Caitriona Balfe…everybody’s take is completely different. It took them forever to find Claire. You have probably heard how they found her. They sort of picked her out of the slush bin, but she just walked into that part and inhabited it. Her physique is not how it is described in the book, but it doesn’t matter. I have always said to people that it does not really matter that much what an actor looks like. It’s can they act? And she just totally had it. It is just instinctive on her part.

Q: Book two (Dragonfly in Amber) begins in a surprising place compared to the end of book one (Outlander)…

Diana: People always think they are reading the wrong book.

Q: When the plotting of season two began, what were the discussions like on how you were going to begin? If we haven’t cast Brianna and Roger, it is obviously not going to start how the book did.

Diana: Well, they actually could because they shoot things out of sequence, so, in fact, that doesn’t actually tell you anything except they have not cast them yet or at least they haven’t told you that they have. No, I was actually not involved in the discussion of how to break the story, so to speak. They do show me the script outlines and the scripts. They show me the footage that they shoot and rough episodes as they come together which is great. I love to see that, but I am very seldom actually in the writers’ room or discussing things with them. That is their job. I am happy to contribute opinions. Sometimes I will read a script, and all say, “Hmm. I understand why you did it this way, but you could do it that way and get more of the original book in and then move this little piece over here.” And sometimes they will do that, about nine times out of ten if I have a concern or suggestion, they will take it. And the tenth time, they will explain why they can’t.

Outlander TV News: You have been quoted in a few articles that you will fight for certain scenes, and sometimes that does not always work out, like the hot springs scene. Has there ever been a point where you thought, “ Hmm. When I sold the book rights, maybe I should have put a little more control in that contract.”?

The MacGuffin: Well, with E.L. James, for one, with Fifty Shades.

Diana: Maybe she shouldn’t have. (laughs)

Outlander TV News: A nightmare, exactly. There you go. So you would never want to be super that involved.

Diana: No, I wouldn’t. I actually don’t think that is a good thing as a whole. An adaptation is a separate art form unto itself. What makes a good novel does not necessarily make a good screenwriter or showrunner. I don’t know whether I would be good at writing a script because I have not done it, but I am positive I would not be a good showrunner. I think it is much better to let the experts do that. I can quibble over details. I can say to them, “Well, you can do this historically or can’t do that historically or it really was this way, but I see why you have done it this way, but maybe could you change this for a little bit more accuracy.” Things like that. That can be helpful, but I totally don’t want to be in control.

Diana: I am very flattered. I had five literary role models to start with, people who I was consciously taking craft from, so to speak. Those would have been Charles Dickens, Robert Louis Stevenson, Dorothy L. Sayers, John B. McDonald, a thriller writer and from him I learned narrative drive and pacing and how to control a series character. P.G. Wodehouse, a British comic novelist who is just fabulous with manipulations of language. A lot of Claire’s, you know the way she talks, and her sarcastic interior monologue has come from that.

Three If By Space: And then how do you feel being…like Jen Graham has said she started her novels because of your writing.

Diana: I am extremely flattered that they could take anything from me. They are more than welcome to it.

Q: Has the show influenced how you write?

Diana: Oh, no. People do ask that all the time and I can see why. As I say, look, they are working thirty years behind where I am. There are eight books between me and them and I have written all this stuff in between. What exactly would I change in the ninth book? These people are now in their sixties and how would they be affected by what these people are doing now. There is just no way that would happen.

Q: Has the show affected how you see the characters?

Diana: No, I still see the original Jamie and Claire as they are. It is fun to watch Sam and Caitriona and they are totally Jamie and Claire when I am watching the show, but I don’t have any problem with show versus book. I can easily carry both images in my mind.

Outlander Podcast: Fan enthusiasm over the years, has it changed in tone? And by that, I mean have you had to distance yourself or change how much you engage with them over the course with the huge influence of social media?

Diana: There are ways of dealing with social media. The thing is that I have always been in the middle of it. I was on Compuserve’s literary forum in 1985. So social media has coalesced around me as new events in technology has come along. I just adapted them. Tumblr and Pinterest, they are not really offer me anything so to speak. I don’t do them. I do Twitter because it is good to getting out quick messages to people and collecting the fans if you need to rally them for something.  You can quite easy that way. Facebook, I love to stay in touch with people. I have a website that is sadly neglected, but I really need to move my stuff from Facebook to there as well. The website is really more a repository or archive of information which is good. When I first knew Sam Heughan, I was sending him some of the stuff the fans were saying and so forth, and he wrote back and he said, “Your fans are crazy. How do you deal with this?” Well, there is a way and I will tell you because he was on Twitter and that is how we met. I said, “Look, you take ten minutes twice a day or only once if that is all you afford, but go on everyday and you don’t have to try and read everything addressed to you or pertaining to you, but go through as much as you can in ten minutes. If someone says it is their birthday, stop and say “Happy Birthday.” Someone says my dog just died, stop and say you are sorry. Someone says something witty to you and something witty occurs to you, say it back. When you hit the end of ten minutes, stop. But the fact that you do it everyday and seem to be responding to people, it gives people the feeling you are actually there all the time. You aren’t and it does not eat you alive.” Likewise with Facebook, it is usually once a day or maybe twice if there is some sort of announcement or something else I need to add, but usually once a day. And I will usually go for a couple of days without if I am doing something like this (SDCC), but the fact that I do it regularly, and I put up a post the next day, I usually take about ten minutes and read through the first two or three screens of comments and reply to the ones that I can easily reply to and nobody notices you are not replying to the ones at the bottom because Facebook helpfully moves all the ones you do reply to up to the top, so anyone who is looking is like, “Oh boy, she is here. She is talking to us. This is great.” It is partly illusion, but partly I just enjoy engaging. I like to talk to people about what it is that I do. I always have. I’m a born teacher and I love to talk to people about writing and the craft. And now that we have the show, I am learning so much about the way it is put together, I like to share it with people.