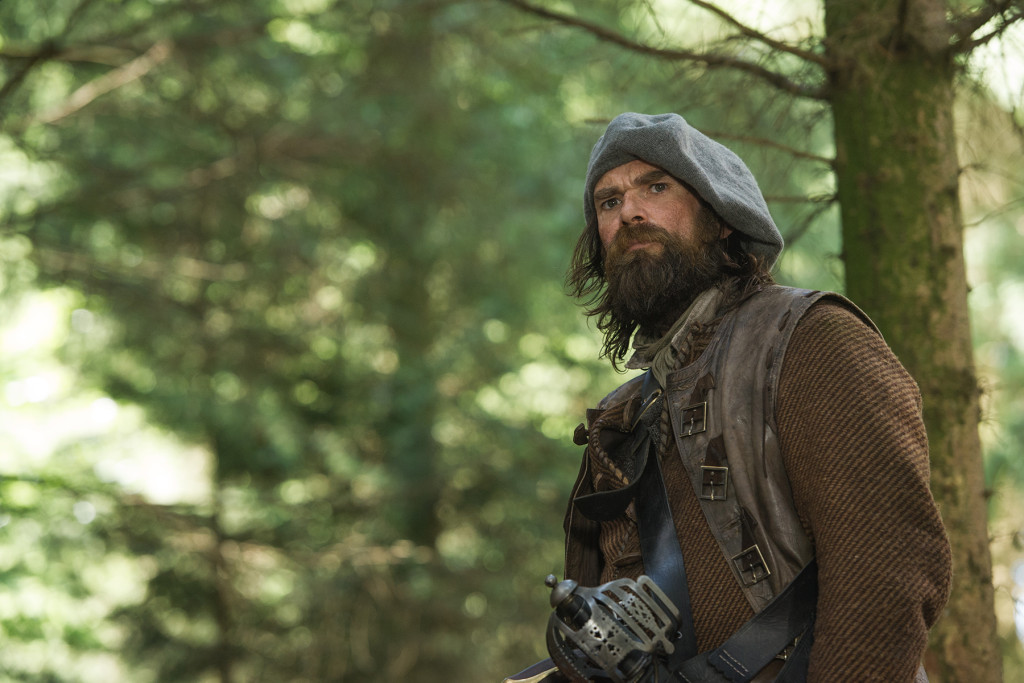 I think this is the first interview that Duncan Lacroix has done for Outlander, other than the random quote here or there.  You know we love him as the gruff and man-of-not-so-many words Murtagh.  Access Hollywood interviewed him prior to his stepping up as a major character in Episode 114, “The Search.”  Below are some excerpts.

“I kind of read the description of the character as ‘dark, kind of brooding, hawk-like.’ I thought, ‘Yeah I can do that,'” Duncan laughed, as he spoke with Access over the phone from Scotland. “I did the self-tape in my flat with a friend of mine on his iPhone and sent it away. I didn’t really expect to hear anything back, or if I did, I thought, you know, there’d be kind of rounds of interviews. But yeah, a week later, I got offered the role, which was huge, and [I was] whisked off to Scotland that very week.”

Access: Tell me about the Gaelic though – a lot of people are very interested in it. Was it tough for you?
Duncan: The Gaelic, I mean, originally, Àdhamh was – he’s just one of the most enthusiastic people you ever want to meet, and he was trying to teach us the whole language, which was obviously too much, so it’s just a question of breaking it down phonetically. Actually, the very first take I did I think, was when we went into the cottage with Claire… I was kind of so nervous ’cause I think it was one of my first scenes that I [gobbled] the Gaelic, but apparently, what I was saying actually made sense anyway.
Access: You know what though, the expressions are as important, I think, to every character, as how they say their words. I’ve got to ask though, kind of a funny question – was one of the requirements, ‘must be able to grow giant mountain man beard’?
Duncan: Yeah… I’d already had one kind of on the go because I’d had a small part in ‘Vikings’ as well, so I had one on the go from that, and yeah, who knew. I was able to grow a massive, bushy beard within about a month, so that was a big bonus.