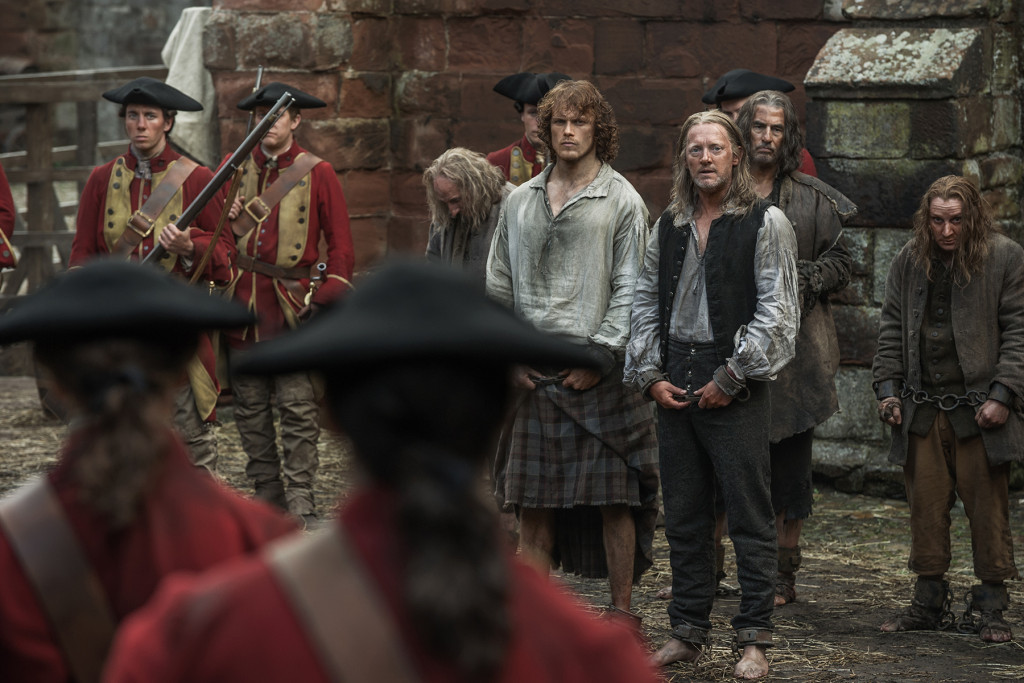 [This is not a spoiler-free review/recap of the episode. If you have not seen the episode yet, read it at your own spoiler risk.]
Episode 115,“Wentworth Prison,” Written by Ira Stephen Behr, Directed by Anna Foerster

I am doing this review/recap a little bit differently due to the violent and sensitive content that is shown in “Wentworth Prison.”  I do not think a detailed recap of what happens in the episode is very good for me or those who read it.  The episode is out there for the audience to watch it as they want, and if they want to skip it entirely, the book is always there to read.

Going into the episode, I was already aware that the situation between Jamie (Sam Heughan) and Jack Randall (Tobias Menzies) would not end at the conclusion of the 55 minutes.  The synopsis for Episode 116 makes it pretty clear that Jamie will still be in Wentworth Prison for at least part of the finale.

The episode is not all hearts and roses and the show itself is not playing around with expectations or stepping around the material.  If you could not handle the whipping scene in “The Garrison Commander,” then go ahead and just skip this one or at least have your finger on the fast forward button.

The title card scene with the hanging ring of torture devices makes it pretty clear what is going to happen eventually.  If you made it past that, then the opening scene greets you with multiple hangings.  A group of prisoners wait for their name to be called, among them is Jamie and MacQuarrie (Douglas Henshall).  Unfortunately, MacQuarrie meets his end and it is not quick.  As the letter of execution with James Fraser is turned, emotions run high.  If you are a reader, you know he is not going to die, but as a non-reader, you may question the fate of of one of our main characters.  Alas, the dread placed on this episode continues as Jack Randall rides into the courtyard and stops Jamie’s execution.  I appreciated how this arrival was shot.  You can see a moment of Jamie questioning whether to just step off the boards and meet death rather than let Randall lay claim to him.

It is after this that we see the dungeon where the rest of Jamie’s scenes will take place.  He is chained to the wall in a dark, stone lined cell.  Jamie tries to free himself by pulling on the chain, but it is no use.  He will continue to try throughout the episode as he has some fight in him and a wife to return to.

Claire (Caitriona Balfe) has arrived at the prison and manages to get an audience with Sir Fletcher Gordon (Frazer Hines), the warden of the prison. Being an Englishwoman in Scotland has paid off again.  Claire does not reveal who she is in relation to Jamie, just that she is an acquaintance of the family.  She is refused a visit or a letter to Jamie.  Sir Fletcher is not totally without redemption, as he takes pity on her and gives her Jamie’s belongings to return to the family.  Claire is a strong woman; she keeps it together until she leaves the prison.  Murtagh (Duncan Lacroix) is there to rescue her from being weak in the knees and being physically sick over the situation.  It is in that moment, that you see how much Murtagh cares for Claire.  It was enough to make me get teary eyed.

Back at the local pub, Claire is resenting the fun that Angus (Stephen Walters) and Rupert (Grant O’Rourke) are having at a game of cards.  Willie (Finn den Hertog) keeps Murtagh and Claire company.  Angus and Rupert were not entirely useless.  They managed to find out when Sir Fletcher would be away from his office.

Randall’s interrogation of Jamie begins.  Randall has brought along some muscle in the form of a daft, large man named Marley (Richard Ashton).  The petition of complaint against Randall that both Jamie and Claire signed has come to bite Jamie on the ass (no pun intended).  That motivates Randall even more, if that is possible.  Darn that untrustworthy, mouthy Duke of Sandringham.

Claire and Murtagh manage to get back into the prison and into Sir Fletcher’s empty office.  When they are left alone and start searching, they don’t find much.  A set of keys is all they get for their troubles, and that comes at a price when they have to knock out a guard who has caught them in the act.  This sets off Claire’s excursion into the prison to find Jamie.  Apparently, walking around to several holding cells yelling for Jamie does not travel far enough for a soldier to hear.

The entire first part of the Randal’s time with Jamie is a mind game.  Randall wants Jamie to admit his fear of him and surrender to him, and in return, Randall will let Jamie choose his own manner of death.  He evens mentions the death of Brutus, which is a nice nod to Menzies’ role as Brutus in the TV series, Rome. Jamie does not surrender. Jamie takes his only chance to take out Randall when Randall tries to see Jamie’s back, his masterpiece.  Jamie does not succeed and he pays a huge price for it.

Claire eventually finds Jamie, as Randall and Marley have left the door unlocked and open.  She is found by Randall and what follows I will not describe.  It is one of the most painful sequences to watch, complete emotional wreckage as all three actors give their all to the scene.  It will triumph against the fight between Jamie and Claire in Episode 109.  This is the scene of the series thus far.  It is not easy to watch, but the all the actors gave themselves over to their characters for that 20 minute encounter, and it was not easy to watch. 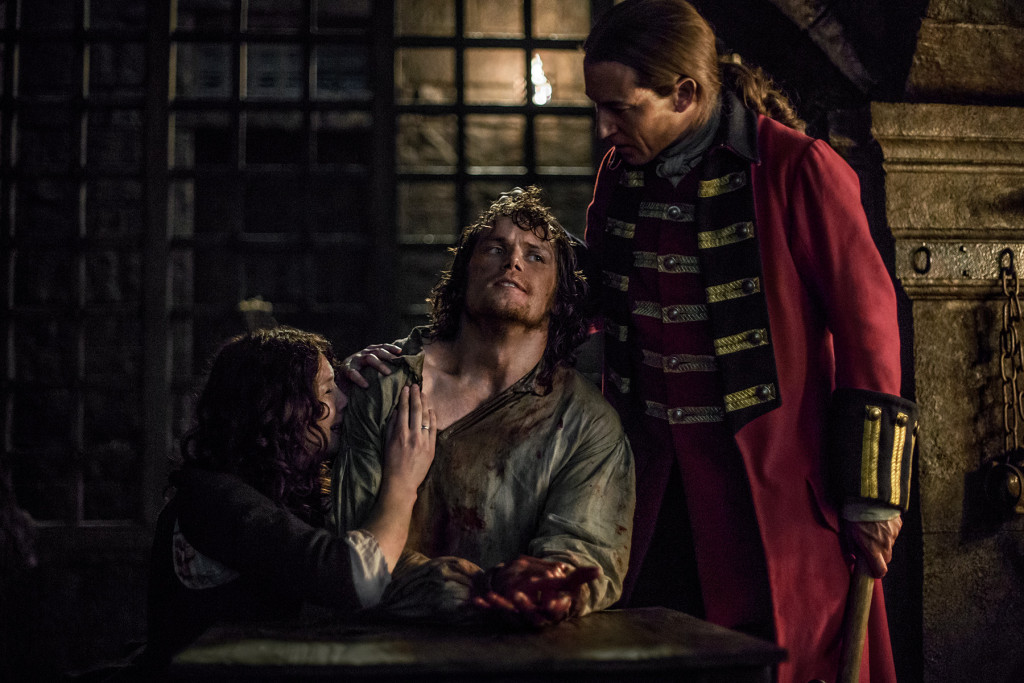 Claire’s life is spared in return for Jamie giving up the fight against Randall.  After getting a taste of what Randall is like rather than just hearing about it or seeing the after effects, Claire is tossed from the prison.  But not before Claire gives Randall a particular curse.  If you want to know exactly what she says, pick up a copy of Outlander.  In a nice compromise for book readers, you hear wolves howling in the background as Claire makes her way through the forest.  Angus finds her and brings her to the home of Sir Marcus MacRannoch (Brian McCardie), a friend of the MacKenzie and Fraser clans.  It is only at seeing his lessened herd of cows that Murtagh comes up with an idea to save Jamie.

“Wentworth Prison” is not as bad as I made it up in my mind to be.  I think we all built it up in our heads to be the worst thing ever.  The two violent scenes, save the hangings, are hard to watch, but I did not find it as disturbing as Randall’s whipping of Jamie in “The Garrison Commander.”  In that whipping scene, we come to know Randall as the sadistic man he is.  Randall explaining it all with a reverence for his work coupled with the blood pouring from Jamie’s back, it takes it all step further.

Not enough can be said about Tobias Menzies and Sam Heughan’s performances in this episode.  They excelled at giving each other as much emotion and rawness as possible.  It is like a dance, perfectly choreographed down to the expressions on their faces in moments of silence.  This is not a scene that any of the readers of Diana Gabaldon’s books were looking forward to seeing come to life (maybe save Diana herself), but we had an odd curiosity about how it was going to be portrayed.  Did we expect showrunner Ronald D. Moore to not go there?  This entire show so far as not shied away from any taboo subject.

Considering that Randall’s time with Jamie is not over at the episode’s end, the finale is not something to look forward to, especially if you shied away from this violence.  Yes, there is solace in the ending of the Season One, non-readers, I can promise you that, but getting there will be tough and another hour of emotions that many viewers may not have in them.

As a reader, I am trying to figure out how they are managing to fit the remaining chapters into a final, one hour episode.   Outlander readers are certainly invested in seeing Diana Gabaldon’s world come to life, and I just hope the whole lot of them is not disappointed with the finale.

See more photos from this episode by clicking here.