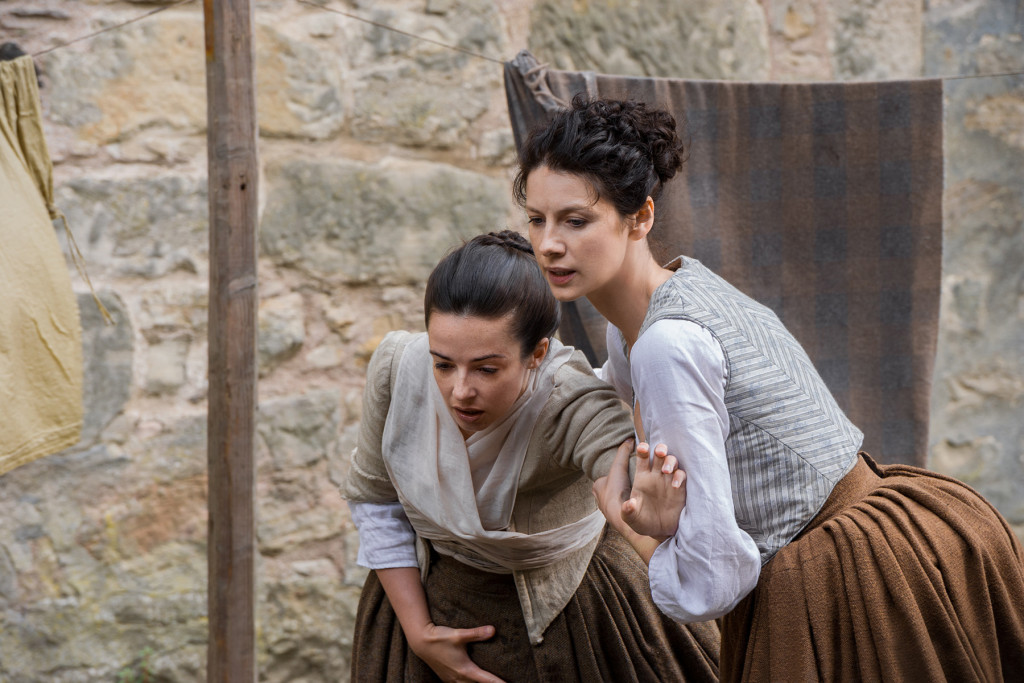 By what I’m gathering in this interview (and what most of you die hards out there probably already know), it would appear that Laura Donnelly went to acting school with Sam Heughan. She talks about how they knew in school that he would likely go on to be a film heartthrob eventually, and that their previous familiarity with one another helped with their sibling relationship in this series.

Again, as with the Lotte Verbeek costume I talked about in the previous article from today, we see another actress wearing a significant baby bump. She describes the get-up as ‘cumbersome’. I think that’s being generous when you think about that extra weight plus the many layers those period costumes already have. (And I thought my Army-issued bullet-proof vest was bad!) At least the annoyance of the costume is alleviated by the close-knit, fun group she talks about acting with, a quality she has not seen very often. Her on-screen husband, Ian (played by Steven Cree), turns out to be the prankster of the group she was a part of, though it seems mostly to be about the teasing rather than full-blown pranks. Honestly, with a group of professionals such as these, I’d be surprised if they have the time to waste on elaborate schemes.

I love how peppy and energetic she is during this interview. It’s exactly the kind of energy I would expect from the sister of Jamie. You can watch the full interview below, but then keep reading for a second interview with Laura!

This is a much shorter interview and Laura appears to be more subdued, but we still get some fun insight into the relationship between the characters of Jenny and Jamie Fraser. She discusses how similar their personalities are and how that leads them to butting heads, but also to how loving and protective they are towards one another. She feels that the pace really picks up during the second half of this season with both more romance and more action, and the opportunity that Jenny and Claire both have to be female heroes. You can watch the quick interview below: