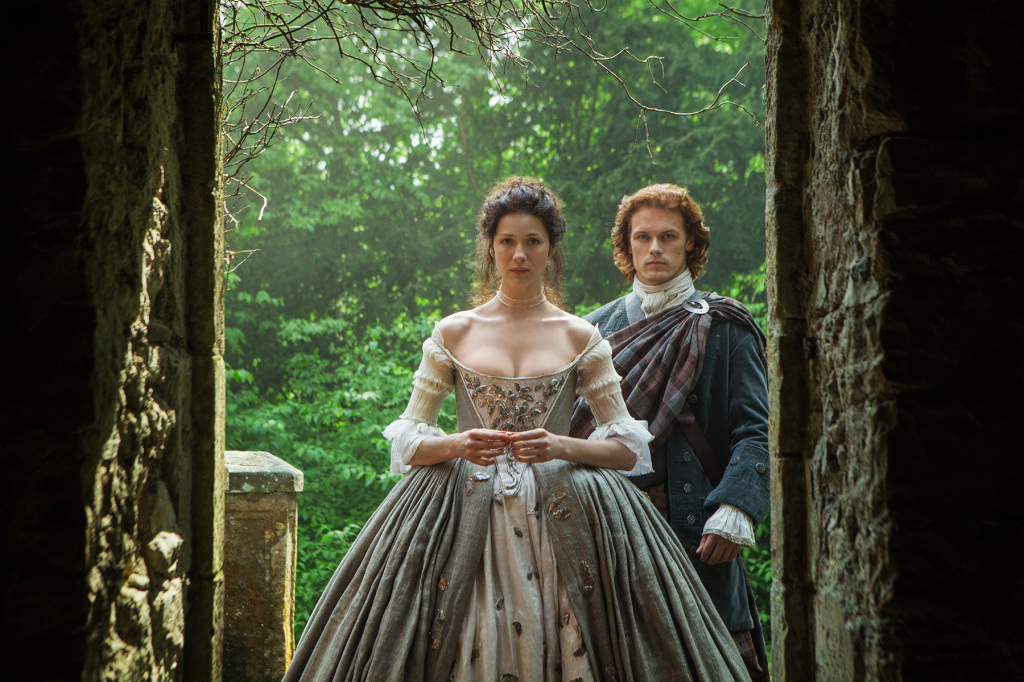 The cast and crew of Outlander create an engaging tv experience week after week and the costumes are a vital part of the show’s vivid storytelling. In a pair of interviews from Digital Runway and HitFix, costume designer Terry Dresbach discusses her history with Outlander, the influence of Scotland’s environment, and more. Below are a few excerpts from both interviews, which can be read in their entirety by clicking the links below.

So the Scottish environment somewhat influenced the you in the design process as well?

Yeah. It’s all conjecture until you get here. It’s all shapes and pretty pictures. It’s not the same as being here.

For example, Claire’s knitwear,. We don’t have any actual research that shows anyone with that particular kind of thing around their neck but one day of wandering around the locations and you realise they’d freeze. We knew that they knit so we could make a logical jump and say that something like this would have existed.

And then, you learn the pure genius of the kilt. When you’re shooting out in the middle the night and the crew are freezing and wet and the Highlanders are warm and dry because they’re wearing period authentic garments made of wool. The entire genius of the Scottish wool industry becomes as clear as day.

Experience is everything when doing this show and I think the experience of being in Scotland ended up being my primary source of inspiration.

How do you take a lovely new costume that’s just been made and make it look like it has been lived in and like it’s an authentic part of the world?

I think that’s incredibly important to a film but you have to know when to do it and when to not because it’s easy to over age things. At some point, every costume had to have been new so if Claire walks into a room wearing a new dress it should look like it’s new but our Highlanders, their stuff should look like it has been beaten to shit.

We have an amazing ageing and dying department. They have a huge crazy room they use and they’ll burn costumes, paint them, sand them, bake them… They do some incredible work to take these costumes and make them look like sweaty and dirty. You have to sell that idea, if you don’t you lose the audience because they don’t believe it any more.

If you’re living and sleeping in your clothes and you only have one set of clothing then it’s not going to be new. It’s a complicated process that takes another team another 3 or 4 days just to age it properly.

Incidentally, there’s some things that will age as they continue to get worn with all the dirt and water and sweat. Our actors are all doing the things they would be doing in the 18th century so when you see Sam (Heughan) with a pitchfork tossing hay into a wagon, he’s actually doing that so all things like that will keep on adding to the layers of authenticity. 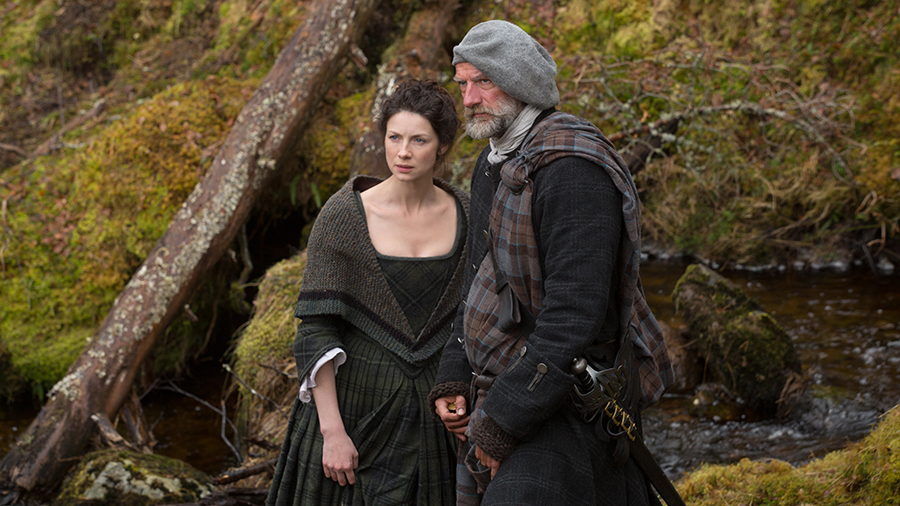 Hitfix: “From sketch to screen: The fashion of ‘Outlander’ Season One with designer Terry Dresbach”

HITFIX: For the back half of the first season, “Outlander” is getting more female characters. Do they each get their own fashion personality? How do you go about deciding who’s wearing what?

Terry Dresbach: Oh, that’s the fun of the characters. I started reading the books when they first came out. I’ve probably read them eight or nine times over the last 20 years. So a lot of what you see is what’s always sort of been in my head as a reader. By the time the actor gets there you already have a solid idea what you want them to look like. But then, the actor is who they are, and they have their personality, their input. It’s a very collaborative process. But you usually bring to the table a lot of the homework before the actors get there and then they take that and run with it. It’s pretty exciting being part of the whole thing.

One of the running jokes of the first season has been trying to figure out where Claire’s clothes come from because she didn’t bring them with her and she has some really nice clothes! Are those some castoffs from Colum’s wife, particularly her coat?

Terry: Mrs. Fitz gives them all to her and it’s funny when you read a book and then your job is to translate to screen. Every little bit that from the book doesn’t go up there. But the costume gets cobbled together from somebody’s [dead] wife and other castoffs. Now one interesting thing about Claire’s costumes – because we only had about three weeks to get her clothes going –or the majority of the show, with the exception of her sort of fancy dressings, only has four skirts and six tops.

I really loved her [Geillis] red shoes. I hope we see more of them.

Terry: You know, that was a pure accident. We had this one pair of shoes in our wardrobe house that just kept showing up in the middle of aisles, like there was a ghost placing them there. We’d walk by and go wonder why somebody hadn’t put those red shoes away. Why are they always stuck in the middle of everything? Then we walked through with Lotte one day and she asked “What are those shoes?” And I tell I don’t know, they’re just stupid shoes we’ve got to get rid of. But she liked those and she put her foot in them and they fit and poof! She wears red shoes.