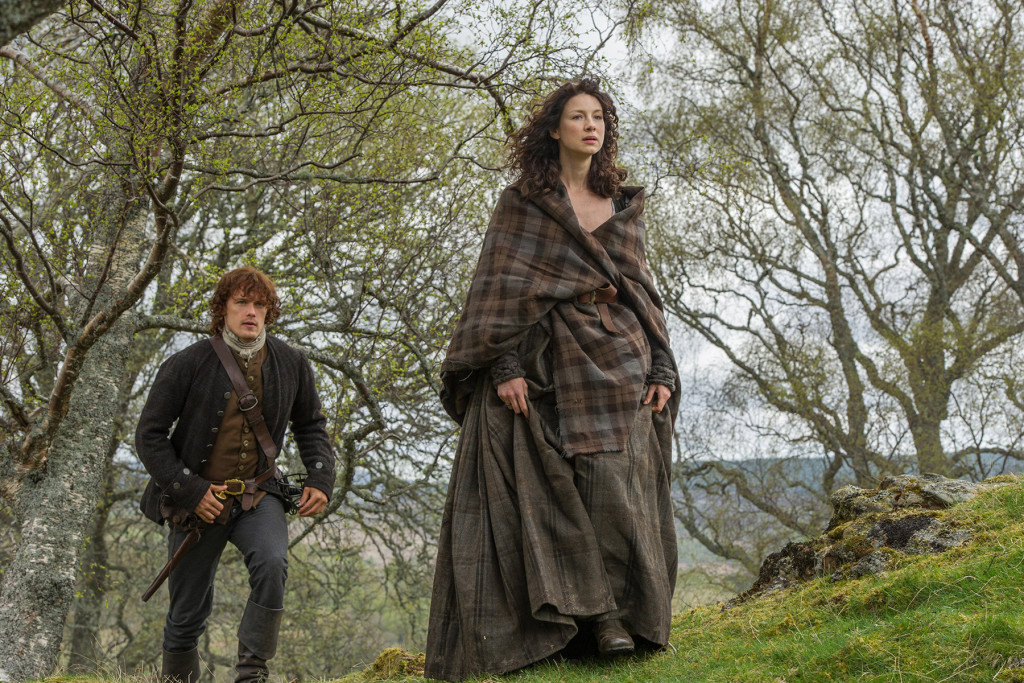 The New York Times featured a wonderful Outlander piece today with Ronald D. Moore and Terry Dresbach discussing their collaboration on the show. For those who may not already know, Moore, the show’s executive producer, and Dresbach, the show’s costume designer, are married and it was actually Dresbach and Moore’s producing partner Maril Daivs who introduced him to Diana Gabaldon’s series.

The NYT piece details the pair’s shared philosophy on the show’s costumes, but also the challenges they face when story clashes with staying true to the period. There are also a few lovely stories about the couple and how their own romance is reflected in the show. The article also features quotes from a few cast members, including Caitriona Balfe (Claire) and Graham McTavish (Dougal MacKenzie), about costumes, the show’s appeal, and Moore and Dresbach’s roles as “Papa Bear and Mama Bear.” Below are a few excerpts from the article, which can be read in its entirety here.

It turned out to be a perfect fit. The couple share a similar philosophy when it comes to period costumes: Make them as authentic as possible. “I want them to look lived-in, beaten-up and home-repaired,” Mr. Moore said. To that end, his wife assembled a 15-person aging and dyeing department, whose primary objective is to weather the costumes and “make them look real,” he explained.

Occasionally, they clash when the needs of story and the reality of costumes collide. For instance, when the villainous redcoat Capt. Black Jack Randall (Tobias Menzies) literally rips Claire’s bodice, Mr. Moore said, “Terry tells me in excruciating detail how impossible it is to rip open these dresses unless you’re the Hulk, because there are many layers of thick fabric.”

The appeal of Outlander:

Still, the overall appeal of “Outlander” is less about sex than it is about chivalry. “It’s unashamedly romantic, and that’s very rare nowadays on TV,” Mr. McTavish said. “A lot of shows are cynical, lacking in hope and nihilistic, and we go against that trend.”

Mr. Moore and Ms. Dresbach frequently host cast and crew members for dinners and holidays, earning them the nicknames of Papa Bear and Mama Bear from Ms. Balfe, among others. “Part of my job is to take care of the family,” Mr. Moore said. “ ‘Do they have food today? How long have they been in the rain?’ ” Ms. Dresbach added: “I’ll whack Sam Heughan on the back of the head if he messes with his costume too much. It’s like I yell at my kids: ‘Pick that up off the floor!’ ”

These father and mother figures often also find themselves compared with their show’s central characters. “The fans say we’re the real-life Jamie and Claire,” Ms. Dresbach said. “I’m a lot like her — I’m outspoken, pushy and brash. Ron is true, solid and heroic. He’s Prince Charming. He’s one step short of having that white horse.”

Mr. Moore shook his head in disagreement. “I’m more deeply flawed than Jamie is,” he said. “But you are very much like Claire.”