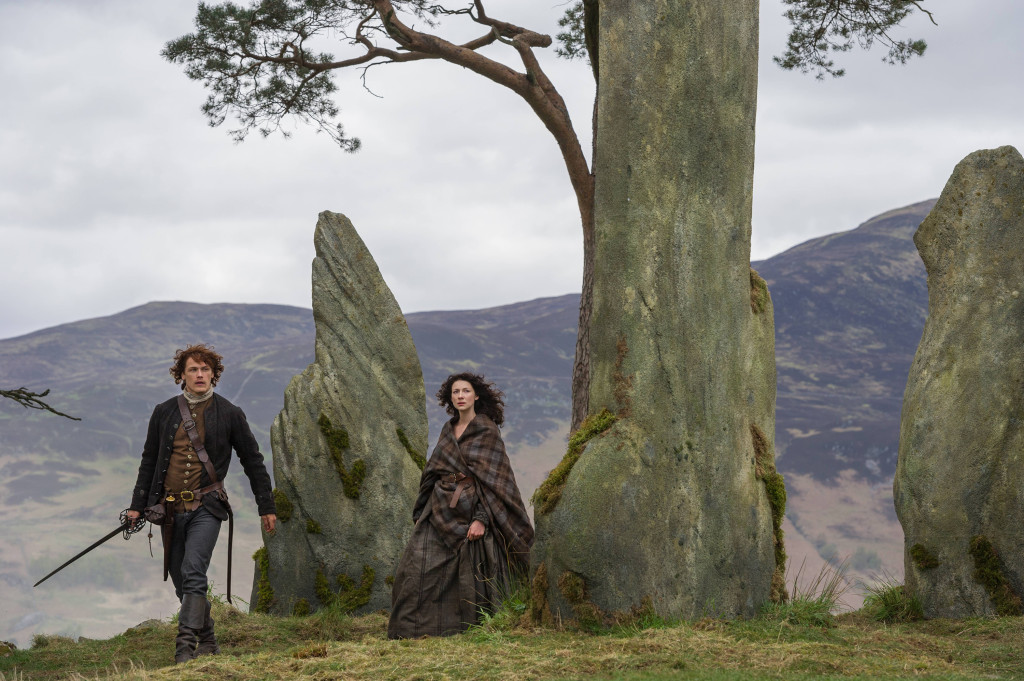 Access Hollywood: Laoghaire Is ‘Quite Deluded About Her Ideas Of Love’ In ‘Outlander’

“She said @#$%ing barbecue, which that word was not around until, well before the forties,” Balfe laughs, when asked how Claire didn’t catch that one. “The funny thing about Geillis and Claire is they had this initial — from the get go — they’ve had this initial attraction. There’s something very like-minded about each other. They loved their shared interest of herbs and botany. But they’ve always sort of circled each other because they’ve both had so many secrets. What was great was to finally see these women put their cards out on the deck and really — I think then that’s when they become true friends. It’s like, ‘oh this what you were made of?’”

“Because he believes her, he gives her the chance to go home, which is a lovely, unexpected reaction,” executive producer Ron Moore tells ETonline. “The fans who don’t know the story probably would think, ‘Well, he’s going to believe her and he’s not going to condemn her for it.’ But I don’t think they’d expect him to bring her back to Craigh nu Dun and give her the opportunity to leave.”

ENTERTAINMENT WEEKLY: You packed so much into this hour. Can you tell me about the decision to address the trial, Geillis’s backstory, and Claire’s attempt to return home, all in one episode?

RONALD D. MOORE: I felt like the Lallybroch stories deserved their own section. And it didn’t feel that either the witch trial or Claire’s revelation to Jaime should be part of the Lallybroch story. The witch trial in and of itself is its own big deal, and then Claire telling Jaime the truth is another big deal. But neither one of those quite felt like they should be an entire episode. The nice thing about doing the witch trial in its present size [is that it] gave enough time in the episode to do the Claire revelation to Jaime, which is not a full-blown story but is a major moment in the book and in the life of the series. So it made sense structurally as I looked at how we were going to carve out the hours.

Why do you think Geillis sacrificed herself for Claire?

Geillis has been focused all along on saving her country. That’s why she traveled back through time. She is uppermost a patriot. However, when Claire refuses to renounce her in court, it stuns and moves her. Geillis doesn’t connect to anyone on an individual level — even her relationship with Dougal is bound up with their mutual goals for Scotland. We think of patriotism as involving nations, but the word patriot comes from a French word that means “fellow countryman.” And what Geillis saw was that Claire’s decision in that moment amounted to a personal patriotism. That’s why Geillis, in turn, made the decision to save Claire.

TVF: Sam, when Claire finally tells Jamie, I was really drawn to how you played the scene with Jamie’s reaction. Tell me about some of the choices that you made in playing the scene.

Sam Heughan: That’s a hard thing to get your head around isn’t it? But ultimately it comes out of what’s just happened at the Witch Trial. He’s always known [Claire has] got a secret. He’s always seen something different about her. So, surprising things about her are not as surprising. Having said that, it’s a huge thing.

I think the way I played it was that, he sort of goes into himself and he has to question…not whether I believe her, but what he really feels about her and, ultimately, he trusts her. He trusts her word. He knows that she’s speaking the truth. She believes what she’s saying so he believes her but that doesn’t mean that he can get his head around it. I think he even says, “I trust you. I trust your word, I can’t understand a word of it,” but for now that’s enough. She believes it so he will believe it.

Then in the next three episodes, they do talk about it, they do discuss it and obviously down the line they use her knowledge for the future, for other purposes. It’s a big ask of someone but that just goes to show that he does value her work but it’s a very simple thing. If I’m in this relationship, I’m going to be grownup about this then I’ve got to believe what she tells me is the truth. That’s a big ask of someone.

TVLINE: You had an impressive baby bump. Talk to me about the prosthetics involved in that, especially because we see so much of you when we see the bump.

There were a lot of hours spent on a table where people were working on my belly, a couple of people who did a great job. I would be surprised sometimes, myself, like ‘I really feel like I’m pregnant right now.’ I’ve never been pregnant, but that looks and feels like what it would be. There’s a heaviness to the [fake] belly. One morning after having shot the same scene for a week — the witch trial took a week to shoot — I would come in in every morning and put on the belly, which took a few hours. That would just be me sleeping for another couple of hours. But I came into the trailer and there were about seven bellies lined up. I should have taken a picture… It was the weirdest thing to see. [The prosthetics artists] were so precise about adding little veins and adding little freckles. The work that goes into that was just phenomenal.

After days of travel and a romantic last night together, Jamie revealed that he’d brought Claire back to Craigh na Dun to return to the future and her other husband. Luckily for viewers, Claire changed her mind and chose to remain with Jamie, forsaking her life in the future with Frank (Tobias Menzies) and all the comforts of the ’40s.

“It was quite difficult for me, coming to that scene, because I didn’t want to just be like, ‘well, she’s in love with Jamie so she’s got to stay,’ because that’s not Claire,” Balfe noted. “You had to think about an entire lifetime of a place and experience, versus a few months and a man. That’s a big battle. The knowledge of the ’40s and the ability for her as a woman to be surrounded by that kind of openness and possibility, versus this place where for saying too much or for mixing a few herbs together to heal people, you’re almost been thrown in the fire. So for me, it was difficult to come up with her rationale.”

In the end, Balfe said, it came down to Claire not wanting to further hurt Frank or Jamie, as much as it was because Claire was following her heart. “I felt that part of it had to be that when she fell through the Stones the first time, it was an accident. So her death or disappearance had already happened and Frank, she has to imagine, must have suffered so much, but must be healing. And I think she felt like, how could she do that again to somebody, but this time choose it? It’s like causing a death. And of course, the pull of love is very strong and we will do almost anything for the people we love, but I just don’t think it was as black and white for Claire as that.”

There’s a lot of talk about how Geillis is such a polarizing character, but to me she just seems like such a ball to play. How much fun is this role?

It is a lot of fun to play, especially because she doesn’t give away everything all at once. And it’s not a one-dimensional thing. There’s a lot of different colors to her. And I think she always keeps you wanting more. She always plays on something and kind of teases, and then pulls back, and then disappears again. And I guess that’s what really got me at first, just the playfulness. And then obviously there’s a lot of intrigue and a lot of mystery and a lot of stuff to be revealed. It’s not like you know her agenda from the get-go.

I always found myself wanting more Geillis. What was it about her that drew you to the role?

Actually, several things made me not want to read for it. In the book, she is so clearly described as an enigmatic, tall, blond, green-eyed Scottish woman. I’m not checking any of those boxes, and I thought it would be easy for them to find someone who matched the criteria better. My agent said, “Just take a look. It would be so much fun for you.” So I did and I was so glad, because the lines read so easily for me. What fascinated me about this role is that it’s so multidimensional. She’s a chameleon. She’s polarizing and vulnerable. In the first half of the season, she’s very mischievous and nosy. And in the second half, you get to see a lot more about her convictions, love life, and capacity for loyalty to Claire. She takes a lot of risks; some are even a matter of life and death.