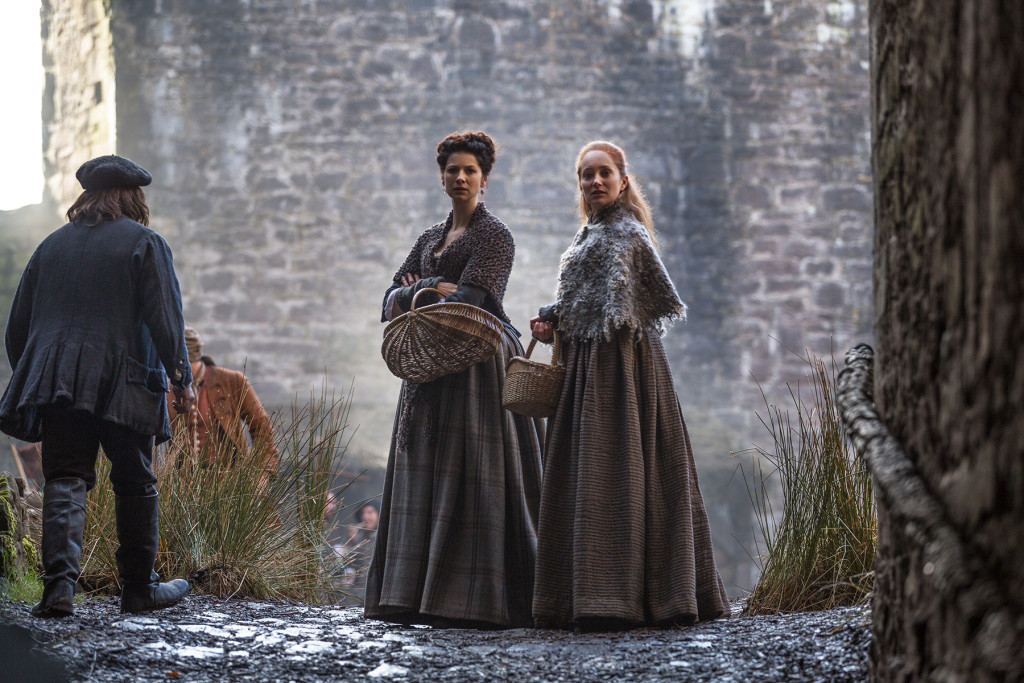 Another new episode of Outlander has come and gone and it is time for the latest interview round-up discussing the events of “By the Pricking of My Thumbs.” The interviews feature Caitriona Balfe, Sam Heughan, Graham McTavish, Gary Lewis, Lotte Verbeek, and executive producer Ronald D. Moore.

Access Hollywood: “Outlander Episode 110: Cast Dishes On ‘By The Pricking Of My Thumbs'”

“The funny thing is, I was very resistant to that,” Caitriona told Access Hollywood when we asked her about getting to slap Laoghaire. “I felt that Claire maybe wouldn’t do that because I felt that she would not stoop to fighting with another woman over a man, but once we got into it I quite enjoyed it – not to slap Nell, because Nell’s absolutely lovely and so amazing, but I think Laoghaire probably deserved it. So yeah, I’m glad that the writers were insistent on that and they didn’t listen to me.”

“It’s so funny because obviously a lot must have happened between Geillis and Dougal, but it almost seems like immaculate conception at some point because you never see them together,” Lotte told Access. “Even that day on set, when they have that look, Geillis’ husband drops dead and she stands up and they look at each other. Even on set that day — ’cause I spent most of the day on this side of the room, and [Graham McTavish] was [on the other side], so it was like – it’s just that look, and then you know. And then obviously she’s going to reveal more about the relationship. And that’s what’s so great, I think, in the writing as well. It’s not laid out, you didn’t see it happen, you don’t see them together, but just by the way she talks, things start to make sense, ‘Oh, now I get it, I totally get it. Of course, that makes total sense.'”

What was it like to play that reveal where she’s performing the ritual Claire and Frank (Tobias Menzies) had previously seen in the 1940s?

Verbeek: It was very physical and revealing for her: both mentally and physically (laughs). It’s the first time that it wasn’t so much about clues being drawn out like we’ve seen throughout the season; it’s ultimately about Geillis going all out. It’s a very exciting arc Geillis has: you know that there’s a lot of mystery and there’s probably going to be a lot of surprises and now we actually get to see more of her true nature — or at least the dismantling of the facade. It’s a little bit grittier and darker and more intense, whereas the first half felt a little bit more romantic. It’s definitely an exciting time.

Why did Claire go out of her way to meet with the Duke of Sandringham?

Moore: We diverted from the book in that area. In the book version of the events, the Duke arrived and goes off with Jamie (Sam Heughan) on a hunting exhibition, meaning a lot of the action would take place off camera. We wanted to play him a little bit more forward in the show [because] he is set up as this interesting figure that plays both sides against the middle, and you question constantly what side he’s on. So we thought, to deal with Jamie and the price on his head, let’s bring that to the front, and put Claire in his world for a minute. Have her take charge of that because in the second season, the tables are going to get turned in some interesting ways.

Paste Magazine: Outlander 110 Recap with Guest Graham McTavish: ‘By The Pricking of My Thumbs’

“The relationship between Geillis and Claire is very complicated, and that’s why I love that we finally then devoted a full episode to it,” Balfe told Variety of this week’s installment. “It was just fantastic, because obviously she’s noticed that Geillis has done something to her husband and that’s not only shocked her, but horrified her, because here is someone that she considered a friend. She knew that there was a wall up between them, and as much as Claire was holding secrets, she knew Geillis was too — but this is bringing it to a whole other level. Claire is a healer — as a doctor you have the Hippocratic Oath, and to see someone take someone’s life, it’s shocking for her and it really rocks the foundation of [their relationship] — ‘Oh my god, can I still be friends with this woman?’”

Vulture: “Outlander’s Gary Lewis and Graham McTavish on Their Sibling Rivalry, Virility, and Fans Looking Up Their Kilts”

Dougal and Geillis exchange a meaningful look after her husband dies, and both Claire and Colum catch that. And given that Dougal’s wife has also just died…

Gary Lewis: He sees, and he knows what’s going on, the skullduggery of it.

Gary Lewis: But I think after that, Colum does not think Dougal is capable of being the leader. He is too all over the place. It would be very dire if he was the MacKenzie, because he’s not focused on the business of the clan. Plus, he’s out collecting money for the Jacobites, which Colum doesn’t think is in for the best interest of the clan. It’s all tied together. It’s all very well to see it’s for honor, it’s for Scotland, but you have to think it through. The clans are divided on the issue. And the English are a disciplined force, in greater numbers than us. Although Colum cannot see the future, he has an understanding that you can’t take a decision like this lightly. So that’s part of their personality clash.

Balfe feels that the intensity was kicked up a notch the minute they made it official. “They are both strong, passionate, independent people who have chosen to come together. Well, they didn’t entirely choose that, but they did choose to love each other, and being married changes how other people, like Laoghaire, interact with them and the personal stakes,” Balfe adds. “Them navigating these new parameters is what I find really interesting to play and to watch. It is a new marriage and realistic in that it is flawed. They fight. They make up. They have to learn to compromise and when to hold to their convictions, but it all comes out of their intense metaphysical and romantic bond.”

It is also easier for her to reconcile Claire staying because Jamie is trying to meet her halfway. “I loved that sentiment when he says basically, ‘Maybe for us it has to be a different way,’” Balfe says. “That’s why she has fallen so hard for him. He has an emotional sensitivity that is very modern. His willingness to live differently than his peers and be challenged by her or include her is progressive. He is very well-educated and has traveled the world despite him wanting to give off the rugged, Jamie Fraser boy-of-the-land vibe. In a sense, he is sort of the 1740s version of her. But he is a work in progress.”