Caitriona Balfe has a really nice feature in the latest issue of Vogue Spain.  Below are the photos from the magazine and the translation for the interview.  Huge thanks to Sam Cait Life for the scans and @Paulindia‘s translation from their page as well.  If you wish to see the feature in all its glory, head to your nearest international magazine rack to pick up a copy. 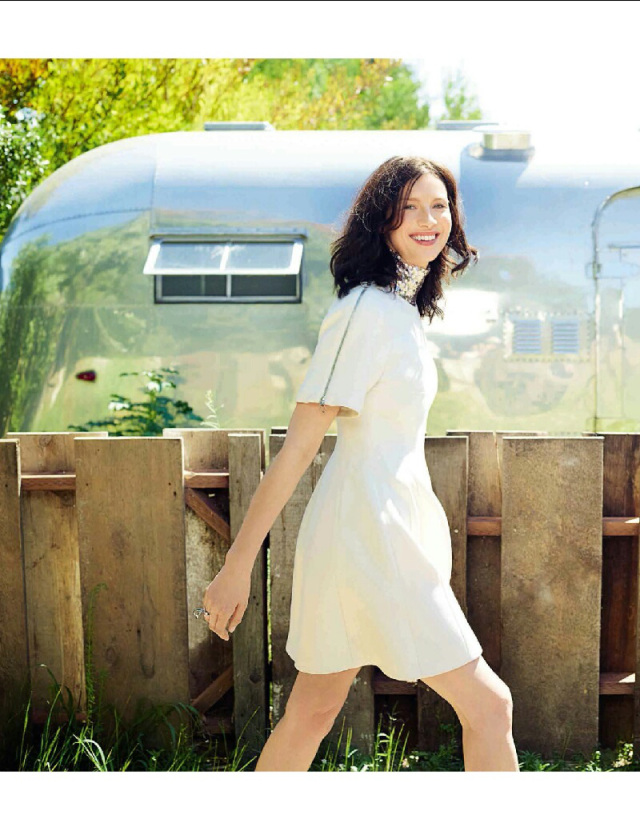 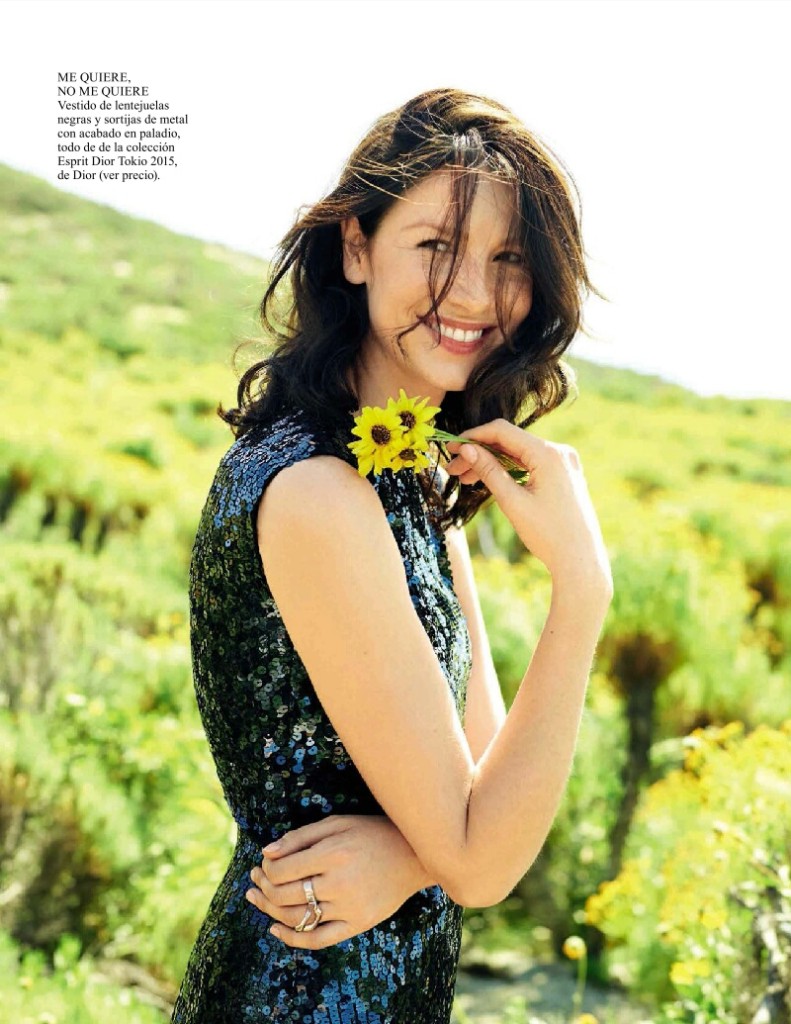 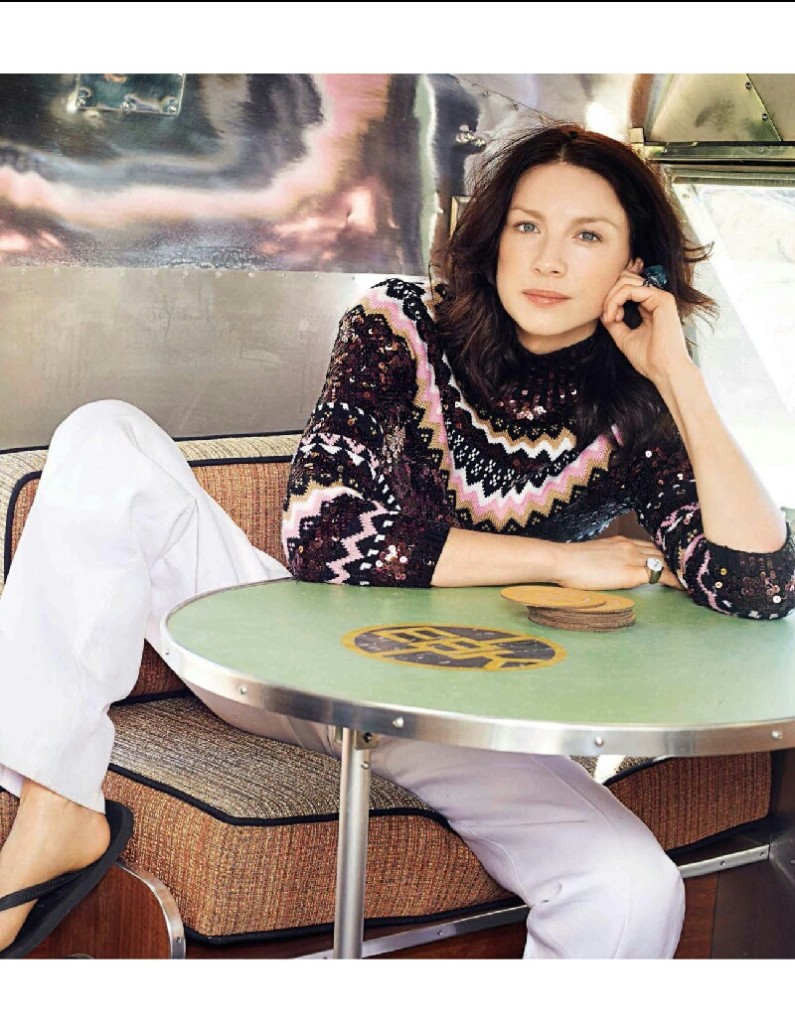 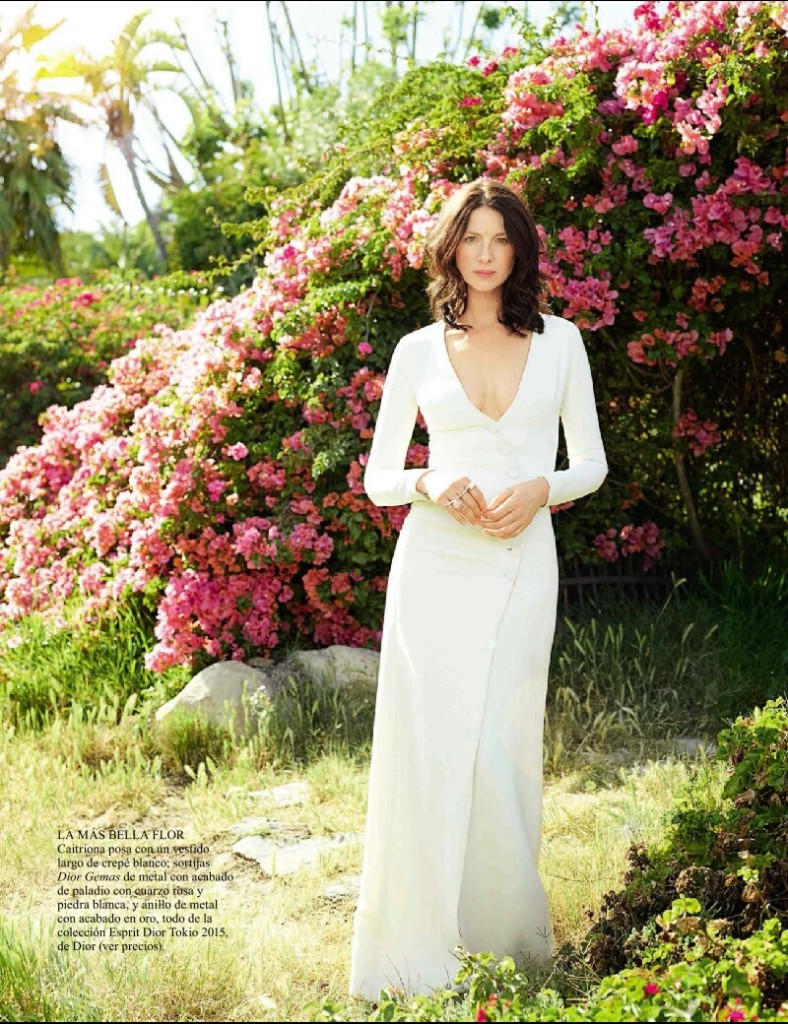 Just as her character in the historical series “Outlander”, Caitriona Balfe has been living between two worlds. The first one, fashion, was left behind to pursue her true vocation. And in the second one, acting, she has succeeded at 35. The next thing? A movie with George Clooney and Julia Roberts…. and the definitive leap to fame.

In Malibu, in a spectacular place in front of the Pacific, we had the chance of making a photo shoot and talk with Caitriona Balfe, the woman of the moment. This 35 year old Irish girl is making it big time thanks to Outlander, the show that has just launched the second part of its first season. Fiction travels in time transforming itself into a hybrid between romance and science fiction. Based on the popular book series written by Diana Gabaldon, the television adaptation has become a true hit with thousands of fans logging into the social media after every episode to discuss Claire Randall’s adventures. Produced by Ron D. Moore, Outlander has Sam Heughan as Jamie Fraser, Tobias Menzies as Frank Randall and Caitriona Balfe as his wife, Claire. For Sam and Caitriona, Outlander has meant their first big acting opportunity: “I am very grateful for the welcoming that the fans of the books have given me. I wasn’t aware of its magnitude until I was offered the part and found out. Now I’m facing the challenge to live up to the expectations that have been created around me to bring the character to life.” explains the actress. Outlander follows the story of Claire Randall, a nurse married to a University professor that in 1945 mysteriously disappears traveling through time, specifically to 1973. She is forced to marry Jamie Fraser, a romantic and chivalrous Scottish warrior, a passionate relationship forges between them, leaving Claire’s heart torn between two worlds. “The best part of this story it’s that everyone can identify with her and her passionate relationship with Jamie. Just to see how he is makes you want to kiss him.” says the Irish girl.

Very confident of herself, Caitriona considers herself as passionate and a feminist. It comes to our attention how direct she is in her answers, even when it’s time to talk about the sexual scenes in the series, for which, from time to time, she uses a good drink of Scotch. A model in her life previous to Hollywood, she considers herself a modern woman, and I have to add, an intelligent one, because Balfe resembles a lot the character she plays- “maybe because I was raised surrounded by women”, says the actress whose grandmother was a nurse during World War II.-”

Balfe has been listening her name being mentioned for the Emmy nominations. She has made herself strong in Hollywood and she’s now working under Jodie Foster’s direction in the film Money Monster, co-starring with George Clooney and Julia Roberts. You better bet for her, because Caitriona is walking with elegance over the carpet of success.

VS: Has your life changed with the success of Outlander?
CB: I am living in a different country and I’m a lot more busy, but my day by day life hasn’t changed that much. I’m very different to Claire in my private life. Nobody recognizes me in the street, which is wonderful, and when it happens, it tends to be good experiences because it’s mostly fans of the series who recognize me.

VS: Maybe you’re living that transition between fame and anonymity.
CB: I feel like I’m in a good place. Two years ago I wouldn’t even dare to dream with what I now have. I moved to Los Angeles five years ago and started from the bottom. I spent years taking acting classes with no one who wanted to be my agent and with no access to auditions. It was a long process that I went through diligently, step by step. That feeling of achieving something I set a goal for it’s wonderful. I don’t know what would I have done if I hadn’t make it.

VS: A great achievement, because there’s a one in a million chance in coming to Hollywood and succeed.
CB: I know. I came to Los Angeles being thirty years old. It’s not about patience, but determination. If you are persistent and work hard it is possible to break through. I tried everything at the beginning: acting classes, independent movies, online series… every role was an opportunity to learn and to grow. I think I fooled myself during the first years, and that fooling helped me to keep my courage. I’m a very determined person and this was something I wanted to do since I was a little girl. My stubbornness finally got away its way.

With a body capable of provoking heart arrest, Caitriona started modeling before she became an actress, and that stigmatized her somehow. Models like her were called “blue collar models” because they were successful but not at the top “but I had studied theater in Ireland before I became a model so I always knew I’ll be back to acting.” explain the actress.

VS: Outlander has many sexual and scenes where you have to perform nude. Is it uncomfortable for you to film those scenes?
CB: Those are very weird sequences. Tobias (Menzies) and me had a very intense conversation at the beginning of the series and it was the first time in my career that I had to do a scene like that. The logistics of having to know what you have to wear to cover yourself was surprising to me, they give you underwear that is very close to your body. It’s in those moments when having been a model helps. I’ve been so much time standing naked in front of people that, in a certain way, I’m immune now. Now I’m older and I’d like to see my body with the freshness I had when I was twenty, but at the same time I’ve been able to leave my insecurities behind. I enjoy the picture of this very real woman and I understand those scenes. I am so focused on the emotions of the character that I can’t sit and think about my ass. But then, when I watch it on the screen (she pauses), that’s a very different thing.

VS: It’s not easy to find characters with that kind of sexual liberty.
CB: Claire is strong, free. The sex in the series it’s not gratuitious, it’s a part of the relationship between the characters.

VS: The love triangles between a woman and two man tend to work in Hollywood. What do you think about Claire’s men?
CB: It allows you to show two different sides of a main character and it feeds the desires of different groups. To me, Frank is too cerebral, very charismatic, something that it’s attractive to a lot of women. Jamie is a young man with a free spirit, innocent and loyal that attracts another type of girls.

VS: If you had to choose between them, which one would you take?
CB: Funnily enough, and even though I don’t feel inclined towards the muscled kind of man, I’d choose the relationship she has with Jamie over the one she has with Frank. I like relationships where people are equals, where we both are at the same level.

She says that George Clooney and Julia Roberts, her co-stars in her next movie Money Monster, are both charming and incredible. About Jodie Foster, the director of the film, she says that she’s calm, intelligent and amazing. “I am excited about this film because it’s the kind of story that I like to see in movies, funny and also brainy.”she adds.

VS: Is it work everything in your life?
CB: Right now it is, but in the future, I’d like to have a partner and children. Have my own family. That kind of thing.

VS: Do you have time for dating, to sign into sites like Tinder?
CB: I’ve never been a dating woman. You won’t find me on Tinder, that’s not like me. When I’ve met people, it has always been through my friends. My world is normally very small.

VS: Do you think beauty is an important part of the career of an actress?
CB: Yes, and I feel that I have two opinions about it. In a way I understand that looks are important, but on the other side I hate that it has to be that way. There are a lot actresses now a days that are in their forties who look like goddesses in their bodies, with perfect faces. But with age, it’s more important to know who you are than your image. We live obsessed with being gym rats and I just wish I I could be braver so I could send all that to hell and say I don’t care. But at the end of the day, when I see my butt in a big screen I see stuff I don’t like and I say to myself ‘I should go more often to the gym.

VS: Do you consider the image we give to teenage girl is unrealistic?
CB: We live bombarded with the image of physical perfection, there are women who are nearing fifty with not even a wrinkle in their faces. We have trampled the feminist ideals. Now, if you hve a good job, there is a certain obligation of having a perfect manicure and salon hairdos. It’s insane!.